Spotify Connect lets you control and play music from any device

Share All sharing options for: Spotify Connect lets you control and play music from any device

Spotify is freeing your music from the device you use to listen to it. With a feature called "Spotify Connect," your current listening sessions will be synced to the cloud, and you'll be able to use any of your devices to control exactly where and how your music plays.

Most importantly, this feature — alongside a set of new Spotify Connect-compatible wireless speakers — will let you switch the music you're listening to from your phone to your stereo when you get home without stopping playback. But since it more generally allows you to separate the device you use to control playback from the device that's actually playing music, you can set up an iPad on your kitchen counter that guests can use to browse and select songs that will then play on your speakers. Or, for a more basic use of the technology, you could just pick up the music where you left off when switching between your iPhone and iPad. All that matters is that you're signed into your account across your devices — from there you're free to use any device as a remote to control the music and choose whether your phone, tablet, laptop, or speaker actually plays back the audio.

It all may sound a bit complicated, but Spotify has made use fairly painless. The updated iPhone and iPad app now include the Spotify Connect logo near the pause, back, and forward controls during playback. Once you click the button, you're presented with a list of available playback devices. If you're signed in on your iPad it will show here, and if you have a Spotify Connect speaker — or one of many wireless speakers that are going to be updated with support — you can easily pair it with your account so long as both the speaker and your device are on the same Wi-Fi network. And speaker playback using Spotify Connect streams music directly from the service's servers, not from your phone or tablet, so you can continue to use either of those devices without having to worry about interrupting the music or draining your battery.

It's important to note that you'll need a Premium Spotify subscription to use Connect, even if you intend to use the desktop app (note: AirPlay support built into the OS X and iOS apps remains a free option). That makes the feature another exclusive the company's using to try and convert free users to premium subscribers as it looks to reach profitability: the bulk of its revenue comes from those who pay monthly fees to use the service.

"As ubiquitous as the CD, but with all of the obvious advantages of being digital."

Spotify's launch today comes as part of a broader effort to make its software more complete — particularly on the social front. The "ultimate goal" of Spotify, as CEO Daniel Ek has said before, "is to be as ubiquitous as the CD, but with all of the obvious advantages of being digital." Features like Radio, Discover, and Browse have helped to bring Spotify closer to that goal, and today's launch of Connect furthers the argument that the service can be at the center of all your music listening experiences. The company still has some work to do to get there, however: despite the new features, many of the apps could use some attention. 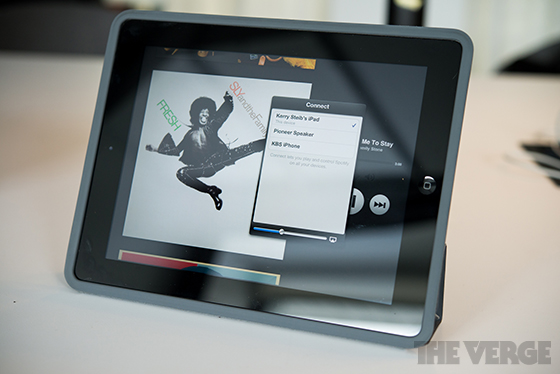 Spotify Connect is rolling out to iPod touch, iPhone, and iPad devices "over the coming months" alongside updates for many wireless speakers from Argon, Bang & Olufsen, Denon, Hama, Marantz, Philips, Pioneer, Revo, Teufel, and Yamaha. The company says it's working to bring more manufacturers on board. Updated Android and desktop apps with Connect support are also in the works.