Android KitKat is the next version of Google's mobile operating system

Android KitKat is the next version of Google's mobile operating system

Google's Sundar Pichai, head of both Android and Chrome, has confirmed that the next version of Android will be called KitKat. Yes, you've read correctly, KitKat, as in the trademarked name of the chocolate candy bar made by Nestle (and licensed by Hershey in the US). A splash page for the new operating system reveals that KitKat will be the codename for Android 4.4, not the long-rumored Android 5.0. The name keeps the company's long-standing tradition of naming each version of its mobile operating system after desserts.

To date, Google has internally referred to the release as Key Lime Pie, but the company decided to go for another name after realizing that "very few people actually know the taste of a key lime pie," director of Android partnerships John Lagerling tells the BBC. Late last year, someone suggested naming the upcoming version KitKat — apparently a favorite snack of Android coders — and the company "decided to reach out to the Nestle folks." Within 24 hours an agreement was made, though it's apparently "not a money-changing-hands kind of deal," according to Lagerling. 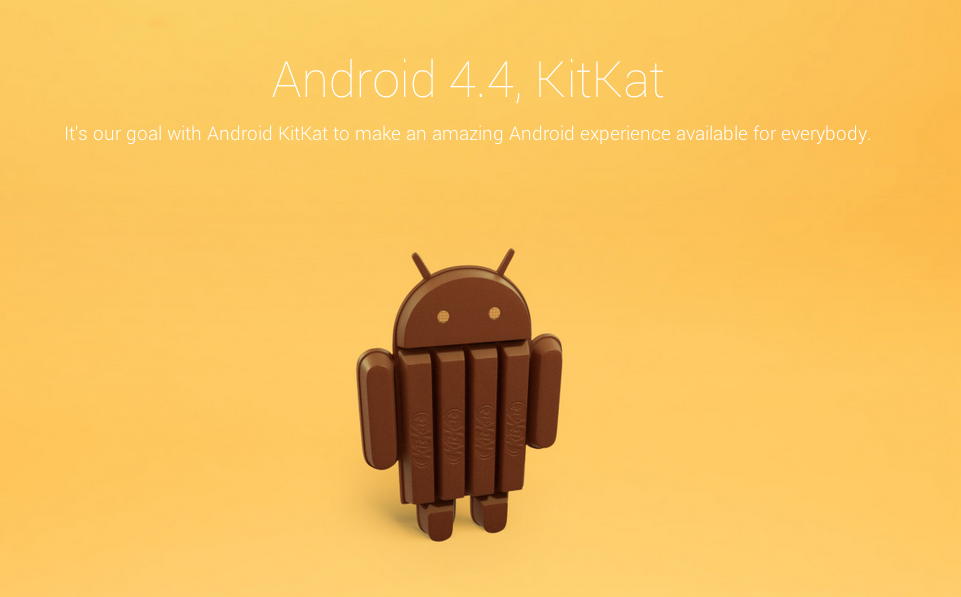 Google says that "it's our goal with Android KitKat to make an amazing Android experience available for everybody." That's certainly a bit vague, but the statement does line up with earlier rumors that suggested Google plans to use its next Android release in smartwatches, gaming consoles, low-cost smartphones, and even laptops.

Pichai says in a Google+ post that he's just returned from meeting with hardware partners in Asia, and he adds that there are now over 1 billion Android activations. He goes on to say that he "can’t wait to release the next version of the platform that is as sweet as the candy bar that’s one of our team’s favorites." To promote the partnership, a new Willy Wonka-style contest offers buyers of specially-marked KitKat packages a chance to win either a free Nexus 7 or a Google Play credit. If you're really lucky, you might even get a KitKat bar in the shape of an Android robot.

Read next: Android KitKat: the story behind a delicious partnership