Can this Japanese company become the Tesla of scooters?

Can this Japanese company become the Tesla of scooters?

Terra Motors' $4,500 scooter turns your smartphone into a dashboard

No electric vehicle is more iconic than Tesla Motors' Model S, and none of its features are more notorious than the colossal 17-inch touchscreen that replaces many of the traditional buttons and knobs found on your regular car dashboard. The Verge's Chris Ziegler wasn't too impressed with the interface when he took the Model S for a spin, finding it overbearing and unreliable. But what if you could bring your own touchscreen to an electric vehicle, providing more useful information while keeping the standard controls intact?

That's the idea being pushed by Terra Motors, a Japanese startup that says it's created the first "sophisticated" electric scooter to enter mass production. The A4000i looks more or less like any other moped, but its spartan dashboard features a conspicuously iPhone-sized slot for you to insert your phone. Once connected over Bluetooth and running Terra's app, the phone will display information such as the current battery charge and information about the trip. Although it's not ready yet, Terra is also developing its own navigation software to be used with the scooter, and plans to include the option to upload GPS data to the cloud to assist cities in congestion management.

Terra is looking to beat the likes of Tesla to market

Shinpei Kato, director of Terra's business development unit, tells me that there's little precedent for a "premium" scooter in the nascent electric vehicle industry, and his company is looking to beat the likes of the similarly named Tesla to market. Terra aims to ship 10,000 units by the end of 2013, and 100,000 in the next two to three years. Unlike Tesla, however, Terra is aiming the A4000i primarily at emerging markets such as Southeast Asia. The quiet scooter is also being positioned as a good choice for newspaper delivery in Japanese urban environments.

At ¥450,000 (about $4,500), one of the world's most expensive iPhone accessories wouldn't necessarily seem the most obvious fit for the streets of Hanoi. But Kato says there's a growing number of people — "the top 2-3 percent" — in such countries that would be able to afford it, and the iPhone connection lends the A4000i cachet as a "high-end personal transport device." The idea is that both smartphones and scooters are status symbols, and the combination of both will be much more desirable than previous mopeds. And, while the current model's dashboard will only fit the iPhone, Terra plans to ship an adjustable console next year to accommodate Android devices.

The iPhone app is limited right now, but perhaps that's for the best; even with a high-contrast black-on-white UI and a matte screen protector on the iPhone, it's very difficult to read the display in direct sunlight. For that reason, Terra has also included a simple monochrome LCD display to show readouts for more critical information such as speed, and the scooter's main controls aren't any different from those of a gas-powered equivalent. The iPhone integration, as such, is more of a curio at this point than a crucial part of the driving experience.

The A4000i's most useful feature may be its battery design, however. The pack is slim, reasonably lightweight, and slots easily into a bay located beneath the scooter's seat. It gives the scooter a range of around 65 kilometers (40 miles) and takes two to three hours to charge, but Kato says its real strength is the easily swappable design. While Tesla is planning expensive, complex pack-swapping technology to build out its Model S network, Terra is working with partners to let customers pick up charged batteries at regular stops. Kato says there is interest from 7-11 and Japanese convenience store giant FamilyMart, and the initiative is designed to combat the lack of charging infrastructure in Japan and Asia. 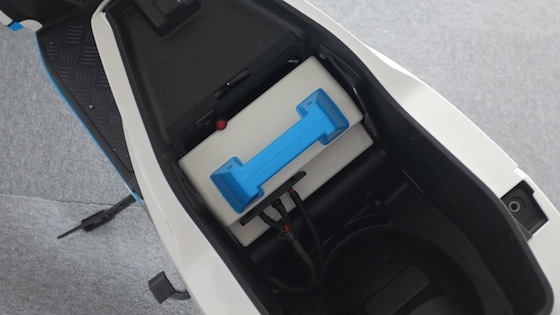 And when it comes to performing on a basic level, the A4000i seems more than competent — in action, it's smooth, virtually silent, and surprisingly fast off the blocks. Its top speed of 65 kph (40 mph) won't set any records, but it accelerates quickly and appears well-suited to its target use cases and markets. But the market for a "premium" electric scooter is far from a proven one, and the larger question of where and why the iPhone fits into all of this remains unanswered. Could Tesla replace the Model S' unwieldy screen with an iPad? That's for Elon Musk to answer, but we wouldn't hold our breath.