Share All sharing options for: How the studio behind ‘Candy Crush Saga’ found success as the anti-Zynga

Time hasn't been kind to Zynga. Once the largest game developer on Facebook, the company has since endured a series of mistakes and poor decisions that have forced it to shed both jobs and users, while its profits have dwindled. This past July, Zynga revealed that its daily active user base had shrunk to 39 million players across its entire lineup of games, down from 72 million in 2012. FarmVille turned the company into a household name, but subsequent releases haven’t resonated with players in quite the same way. After filing for an IPO, shares of Zynga began trading on the NASDAQ on December 16th, 2011 — and there's been little good news to report for the company since that time.

Candy Crush Saga developer King appears to be in a similar situation: it’s known primarily for one massively successful game, which has grown by leaps and bounds in a short period of time. So it comes as little surprise that King, which will reportedly be filing for an IPO as well, has drawn plenty of comparisons to Zynga. However, while the two share many similarities, King has built its fortune by acting like an anti-Zynga; a cautious company adept at staying on top of industry trends. And this could help it avoid the same fate as the FarmVille creator.

King could avoid the same fate as Zynga

Founded in 2003, King began its life as a web game portal. (For nearly five years it also employed none other than Minecraft creator Markus "Notch" Persson.) In August of that year, the company launched Midasplayer.com, a site that focused on skill-based multiplayer games and offered cash prizes as an incentive to play. By 2005 the site had attracted more than 15 million players, and in November its name was changed to King.com, a portal focusing on the more casual games the company is known for today. Since then the company has steadily and successfully moved from one platform to the next: Candy Crush first hit the web in 2001, followed by Candy Crush Saga on Facebook in April 2012, while that same November saw the release of a mobile version. Today the title is the most popular game on Facebook, ranking higher than both FarmVille and its sequel, while the mobile versions regularly rank as the top-grossing apps in both the iTunes App Store and Google Play.

Over that time the company experienced massive user growth, and according to King it has more than 92 million daily active players across all of its titles as of this June. But during that time King has showed a kind of restraint not typically seen amongst rapidly growing web companies. It has made no major acquisitions, and outside of new studios in London and Barcelona, both launched in 2012, its internal growth appears to be minimal. Currently King has a relatively small stable of around 550 employees — in contrast, Zynga's most recent round of layoffs saw 520 people lose their jobs, and it’s currently home to more than 2,300 workers. This restrained growth also extends to King's lineup of games. The developer currently only has a handful of active titles, all of which are successful. It's second most popular game, Pet Rescue Saga, is currently the third-biggest game on Facebook and is regularly hovering around the top 10 grossing apps in the App Store and Google Play. 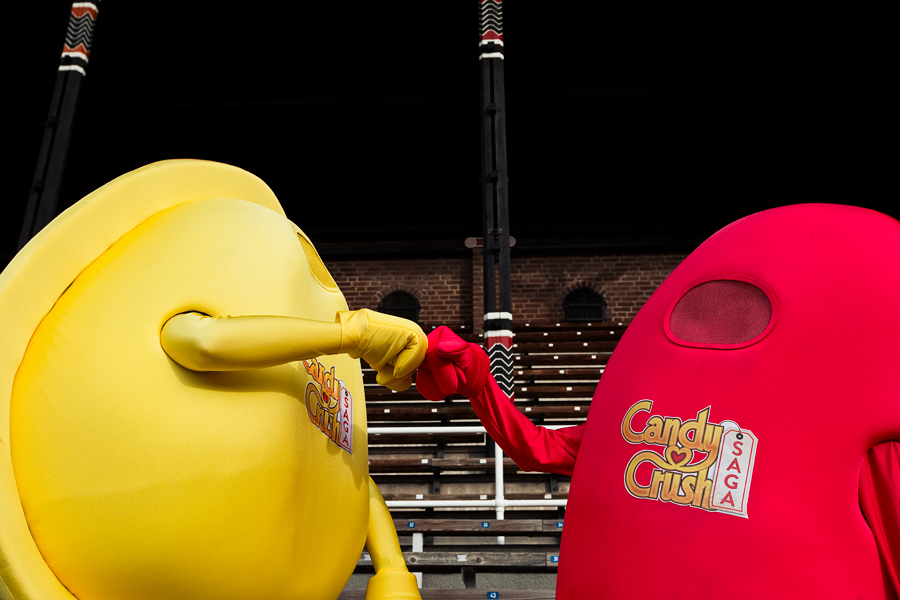 King has also shown an uncanny ability to keep up with market trends, successfully transitioning its games to multiple platforms. As web games gave way to Facebook, so did King. It made a similar transition as gamers moved to smartphones and tablets. King’s games aren’t exactly unique — Candy Crush is simply another match-three game in the mold of Bejeweled, while its next mobile release, Papa Pear Saga, is essentially a Peggle clone. But the games feature a degree of polish and care not typically seen in the free-to-play space, as well as cross-platform features that can actually make them more appealing than their obvious inspirations. Progress in Candy Crush Saga can be synced across multiple devices, making it easy for players to sneak in quick bouts of sweet-matching.

Zynga, meanwhile, has struggled to make much headway outside of Facebook, the platform that helped it rise to prominence. The company's web portal, Zynga.com, had just 4.2 million monthly active users in the second quarter of 2013, a staggeringly small number and less than one tenth of the number of players Candy Crush Saga has on Facebook alone. Meanwhile, in an attempt to tap into the burgeoning and lucrative mobile market, Zynga has focused mainly on acquisitions, a strategy that has largely failed. Last year the company paid $180 million for Draw Something developer OMGPOP, only to shut the studio down one year later. A sequel was released that failed to reach the incredible popularity of the original game.

As Zynga's own properties like FarmVille and CityVille fail to gain traction on mobile, acquisitions have been the company's main tool for cracking that market — OMGPOP is just the most expensive example. In January 2011, for example, the company acquired Drop7 developer Area/Code, rebranding it Zynga New York. The studio was shuttered in June of this year, in a round of layoffs that accounted for 18 percent of Zynga's workforce. Likewise, in 2010 Zynga attempted to piggyback on the success of Words With Friends by acquiring its developer, Newtoy, which is still operating under the Zynga With Friends banner, but has yet to have a breakout hit since becoming part of the social gaming company. As part of this strategy Zynga has released a huge number of games. Currently the company has 26 active titles on Google Play, for instance. King has just three.

This smaller lineup of games allows King to focus its resources on what matters most: keeping its players happy by regularly updating its games, and ensuring that they're available on the most popular platforms. And this slow but steady approach seems to be working: according to The Telegraph, which broke the news of King's impending IPO, the company could be valued at more than $5 billion. (King has yet to make a statement on the topic.) King has also reportedly been profitable since 2005, just two years after it was first formed. When it comes to game design, King and Zynga may not be all that far apart. But as far as businesses go, the company behind that candy-matching game is crushing its competition.