Gives a whole new meaning to the idea of interchangeable lenses

The rumor that once seemed too wild to be true has just become an official reality with Sony's announcement of the new QX Smart Lens series of smartphone accessories. These so-called lens-style cameras contain almost all the hardware you'd find in a Sony point-and-shoot — a zoom lens, image sensor and processing chips, a battery, stereo microphones, and even their own memory card slots — but omit the inclusion of a viewfinder. That role is to be performed by your smartphone, which connects via Wi-Fi and is used to control the Smart Lens and share the resulting images out to the world.

Today's introduction is led by the bulkier QX100, which will retail for $499 / £400 near the end of September. Lest that seems too steep a price, consider that this is essentially an LCD-deprived RX100M2, our favorite point-and-shoot camera, which costs $750 in its fuller form. The QX100 matches it with the same 20-megapixel, 1-inch sensor, same Carl Zeiss optics, and same BIONZ image processing. It's almost literally an RX100M2 attachment for your phone. Which might just be worth the high price.

Sony goes where no one's been crazy enough to go before

For more frugal cameraphone enthusiasts, Sony has the $250 / £180 QX10, which should be out on the market at the same time as the higher-end model. The QX10 has an advantage over the 100 in stepping up the zoom from 3.6x to 10x, but sacrifices image quality with its smaller 1/2.3-inch sensor and less prestigious Sony G Lens. It also has a lower maximum light sensitivty, topping out at ISO 3200 versus the QX100's ISO 6400 limit.

Both camera modules will pair with your phone via NFC, if you have it, and will then transfer data over Wi-Fi to Sony's PlayMemories app. The QX Smart Lenses are compatible with Android and iOS devices, will accept microSD and Memory Stick storage cards, include optional clips for attaching to the back of a phone, and also have tripod mounts for those users who want to get really serious with their mobile photography. 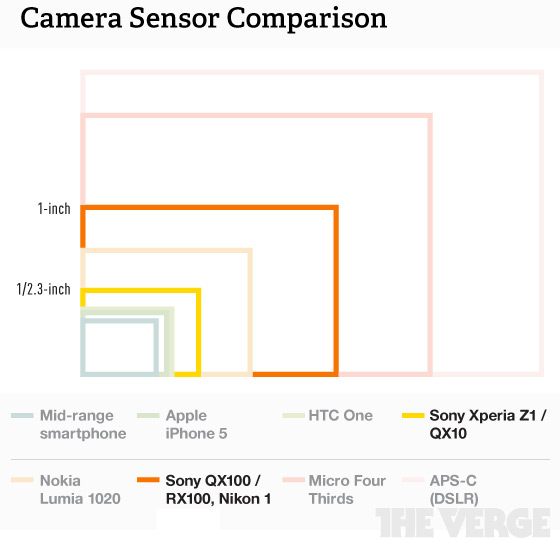 Although made out of simple plastic, both QX Smart Lenses feel precisely and durably built. They also have their own shutter triggers and zoom controls, allowing for operation while detached from a smartphone. I'll admit, strapping one of these onto a phone makes for a distinctly weird experience, and if you judge them as phone peripherals, they really make little to no sense. But viewed as cut-price point-and-shoot cameras that require a bit of smartphone help, the QX Smart Lenses seem like a win-win proposition for both Sony and its fans. My first experience with the QX100 was fun, though I couldn't help noticing a few extra delays in processing and transferring data relative to more conventional shooting. Apart from those niggles and the disorientation that results when you start waving the camera around, I can't see too many downsides to Sony's bold new product category. Maybe we can come up with a catchier name though, eh?

More from this stream Sony at IFA 2013: the Smartwatch 2, Smart Lenses, and more