Sony's three new VAIOs find ways to make tablets out of anything, even 21-inch desktops

Sony's three new VAIOs find ways to make tablets out of anything, even 21-inch desktops

At IFA in Berlin, Sony's taken the stage to announce three new additions to its lineup of VAIO PCs. They're three radically different devices for radically different users, but from their 1080p touchscreens to their shape-shifting form factors, one thing is clear: Sony can turn anything into a tablet.

The new VAIO Flip PC, part of the company's lower-end Fit line, joins a breed of laptops that use innovative hinges to twist, flip, and torque into other shapes. The Flip uses a fulcrum about half the height of the laptop itself, which normally looks like part of the lid. Push backward on the top of the screen, though, and the display rotates over the base, flipping over and docking again facing away from the keyboard. You can lay it down on top of the keys and use the Flip like a tablet, or use it display-out with the base as a stand. You get all the viewing options as a device like the Lenovo Yoga, but with a more complex (and slightly less sturdy) mechanism.

Acrobatics aside, the Flip PC is a fairly typical Windows 8 laptop. It comes in 13-, 14-, and 15-inch models, starting at just 2.6 pounds for the smallest model. It comes with Intel's Haswell processors up to Core i7, optional discrete graphics, and a 1080p touchscreen. I saw only a prototype, but it was well-made and sturdy, and thanks to a rigid locking mechanism there's no indication it's anything but a normal laptop — unless you want it to be. This kind of device appears to be the next mainstream model; it's not totally breaking the notebook mold, just adding useful features to the equation. 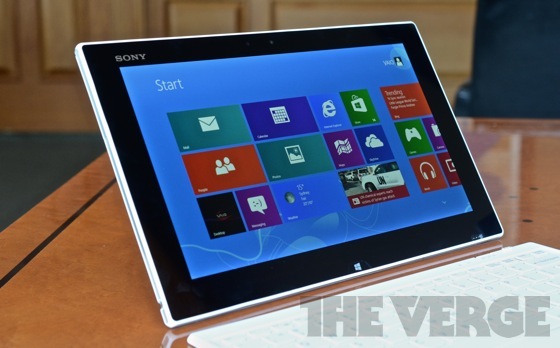 Windows tablets are getting more and more PC-like

The VAIO Tap 11 does the opposite circus trick: this 0.39-inch-thick tablet comes with a clicky, comfortable magnetic keyboard dock that helps it do a pretty convincing laptop impression. That's partly thanks to its spec sheet, too: it's a full-powered Windows 8 PC, with up to a Core i7 Haswell chip, a 1080p display, and a full spate of ports.

Its Bluetooth keyboard sits detached when you're using it, but docks on top of the screen when you stick them together and put them away. Even put together, it's still an incredibly thin device. The Tap 11 has almost no trackpad to speak of, but otherwise works just like any other laptop — including the awkward touchscreen problems caused by having such a small, high-res display. 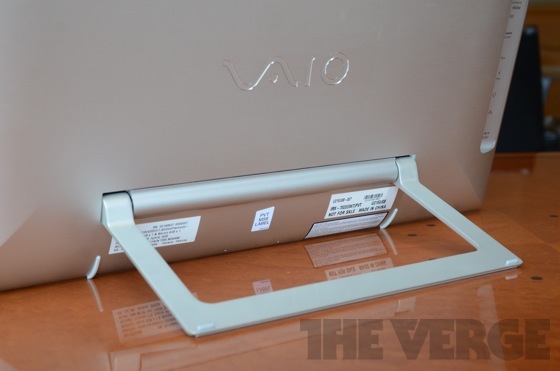 "Small" is not a problem Sony's Tap 21 has. It's the successor to the Tap 20, Sony's first "portable all-in-one," which you could either say is a desktop with a battery or just a really gigantic tablet with a kickstand. The Tap 20 was a surprising success for Sony; reps said they can't keep it on store shelves. The 21 offers better build quality, a larger 21-inch 1080p screen, a lighter body, and a cool self-adjusting stand that lets you lay the device flat, or prop it at almost any angle without having to fiddle with the hinge.

The 'portable all-in-one' is a surprise winner for Sony

Sony's not announcing pricing or availability for any of its models yet — IFA announcements are always global and usually vague on those details. But having spent a few minutes with all three devices, it's clear that Sony's committed to making premium PCs and experimenting with the best ways to do that. The Flip PC is one of my favorite convertibles so far, totally at home as a laptop and yet really easy to make a tablet. All three are variations on the laptop theme, and wagers that no matter what we want to buy, we also want a tablet. Even if it's a giant one.

More from this stream Sony at IFA 2013: the Smartwatch 2, Smart Lenses, and more