Samsung's Galaxy Gear is a smartwatch like no other

On sale for $299 in the United States from early October

The Galaxy Gear, Samsung's latest foray into the smartwatch category, is now official and it's quite unlike anything you've seen before. Yes, it's a smartphone accessory that can pick up notifications, control music playback, and keep time with a rich variety of watch faces, but Samsung takes it a few steps further by integrating a 1.9-megapixel camera, a speaker, and two microphones — allowing you to shoot short 720p movies and even conduct phone calls with the Galaxy Gear.

It's not a standalone phone, but you can use it to make phone calls

Importantly, the Galaxy Gear is not a phone in its own right — it relies on a Bluetooth connection to your Samsung Galaxy device in order to do most of its connected work. When it goes on sale later this month, the Gear will be compatible with the freshly announced Galaxy Note 3 and Galaxy Note 10.1 2014 edition, while software updates for the Galaxy S4, Galaxy S III, and Galaxy Note II are in the works to introduce compatibility there as well. That new software should begin rolling out from October, depending on local carriers. Given that Samsung's new Galaxy slates run Android 4.3, which supports the Bluetooth Low Energy standard, Samsung may well have just tipped its hand about when it intends to distribute the 4.3 upgrade to its older Galaxy handsets.

Returning to the star of the show, the Gear, you'll find a 1.63-inch Super AMOLED display with a thrifty 320 x 320 resolution, a single-core 800MHz Exynos processor, a metal face and buckle, and a selection of six different shades of adjustable wrist band. Samsung is using the colors to emphasize the role of the Galaxy Gear as a lifestyle device: the Wild Orange is aimed at sporty types while the Rose Gold targets a more feminine audience. The Korean company also claims the bands are very ergonomic, but in trying them on I found them less supple and flexible than the strap on the Pebble. Additionally, with all of its extra integrated tech, the Galaxy Gear is a fair bit bulkier than the Pebble, though Samsung's correct in saying its watch is lighter than it appears.

As usual with Samsung, the Galaxy Gear is a feature-rich device. Basic onboard apps include a pedometer and the ability to find your Galaxy (or, alternatively, an option to find your Gear via your Galaxy handset), but most impressive of all is the number of compatible apps. Samsung says there are over 70 to choose from — which can be installed via the Galaxy Gear Manager app on your phone — and I spotted some popular names like Pocket, Path, Evernote, RunKeeper, and Runtastic Pro. Samsung's S Voice is also accessible via the Gear, but got no direct mention in the company's presentation. It's either becoming a standard feature or is being deemphasized as a major selling point.

One thing the Gear has in common with other smartwatches: it's not terribly smart

There are a couple of significant downsides that temper my enthusiasm for the new Gear. First and foremost is the speed and intuitiveness of the user interface — or rather, the lack thereof. There's a tangible lag to anything you do with the Gear, while the swipe gestures are hard to figure out and do different things depending on where you are in the menus. Additionally, the speaker built into the buckle is too quiet and makes the old sci-fi action of conducting a phone call via your watch a possibility only in quiet areas; it also doesn't play back any music, it just controls output on your connected device. Most of all, however, I find it hard to justify spending the $299 asking price on an accessory like the Galaxy Gear. It's too dependent on its parent device for functionality — which will cost you a fair amount too — and, like all other smartwatches, fails to truly live up to the "smart" part of its name.

Also important will be the Galaxy Gear's battery life. It does use the Bluetooth 4.0 Low Energy standard to communicate, but at 315mAh its battery is decidedly small. Samsung promises "about a day" of endurance from the Gear, but by the end of our briefing with the company, the cameras on most of its demo units were refusing to turn on due to the watches running low on power. 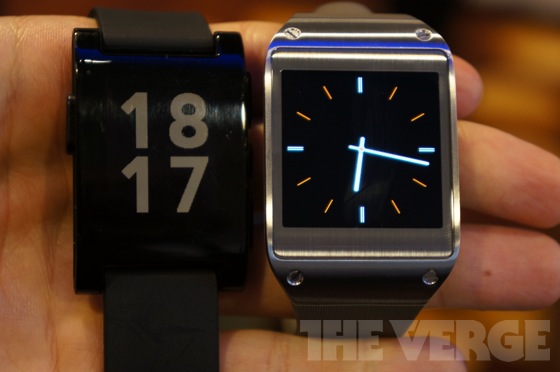 On the plus side, the camera built into the Galaxy Gear produces surprisingly decent pictures and there are 4GB of onboard storage to stash them on if you're away from your smartphone. Samsung has intentionally made it impossible to disable the shutter release sound, so you won't be able to sneak any improper spy shots, but the camera's definitely a fun little feature to play around with. That's the thing about the Galaxy Gear — if you think of it as a toy and a fun accessory, it can definitely be enjoyed, however Samsung just isn't pricing it like such a device. The Galaxy Gear will launch globally in late September and will be available in the United States for $299 in early October.

READ NEXT: SAMSUNG'S GALAXY NOTE 3 IS BIGGER, FASTER, THINNER, AND LIGHTER, BUT IS IT ANY BETTER?

READ NEXT: SONY'S XPERIA Z1 AIMS TO BE THE BIGGEST AND BEST ANDROID CAMERAPHONE YET