We've heard rumors that the new iPad will be styled like the iPad mini for a while, but a new video of what are claimed to be 5th-generation iPad parts has given us the clearest look yet at the new tablet. In the video, uploaded by Unbox Therapy, an empty iPad shell and front panel are compared to the current iPad. Assuming the parts are real, the new iPad will be significantly narrower — 15 mm, or two-thirds of an inch — than the outgoing model, with slim side bezels similar to the company's iPad mini. The narrator of the video is even able to hold the device in one hand like a smartphone. The device also appears to be thinner than the 4th-generation iPad, eschewing the previous model's tapered sides for a boxier look.

It's been argued that the full-size iPad's bezels were made thick by design, rather than necessity, in order to prevent false touchscreen inputs and make the device easier to hold. We'll have to see if this is indeed the final design, and what Apple's explanation for the change of heart is. 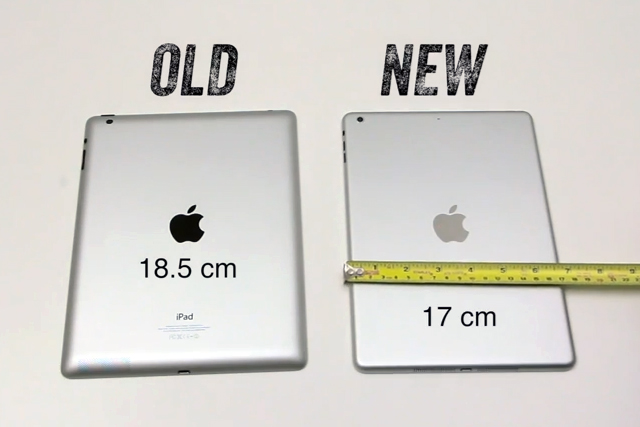 The overall aesthetic appears almost exactly the same as the image 9to5Mac leaked earlier this year, but without a plastic insert for radio antennas. While Apple announced a September 10th event yesterday, it's expected that the event will focus on new iPhones, with Bloomberg and the Wall Street Journal agreeing that refreshed iPads will arrive at a separate event later this year.

Update: Unbox Therapy is back with another video, this time comparing the alleged 5th-generation iPad rear case with what is claimed to be the latest iPad mini. Aesthetically speaking, the mini looks identical to the first-generation model, making it hard to gauge the authenticity of what we're seeing here. One interesting point: the "new" full-size iPad looks to be just as thin as the smaller iPad mini.