Sony's Action Cam is rugged and boxy, but unless you're in grave danger somewhere you might be better off buying the $299.99 Sony Music Video Recorder (HDR-MV1). Mostly because it's just gorgeous — a beautiful, weird black and silver box that looks a little like a futuristic weapon or something James Bond might carry. (Though he's probably not big into taking video.) It essentially pairs the Action Cam's innards with a dual microphone array, which captures 120 degrees of broad, dynamic sound. Sony's pitching it almost exclusively to YouTube musicians — thanks to built-in Wi-Fi and NFC you can shoot and share all on the same camera — but for all but the most active users this might make more sense than your average GoPro or Action Cam.

We got to see and hear the results from a Music Video Recorder next to devices like the Zoom Q3 HD and even Sony's own Action Cam, and the results are impressive. The video looks good without being overwhelmingly impressive — it shoots 1080p video at 30 frames per second — but the sound is dynamic, broad, and actually has a sound stage unlike nearly any other device this small. As he brought it out, Sony's rep told us "probably the only thing Sony's been making longer than audio products is rice cookers." Sony must, at the very least, make really good-looking rice cookers. 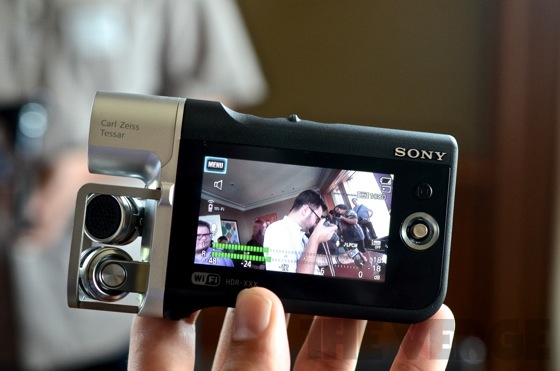