Scientists develop a literal window into the brain

Share All sharing options for: Scientists develop a literal window into the brain

Lots of breakthroughs are hailed as providing a "window into the brain," but a team of mechanical engineers at UC Riverside have taken the phrase literally, creating a transparent material that could be used to surgically replace patches of skull.

The breakthrough itself is relatively simple — a clear version of a common biocompatible ceramic used in dentistry and orthopedics — but project leader Guillermo Aguilar says that once doctors can give patients a transparent patch of skull, the resulting treatments could have a profound impact. According to Masuro Rao, another professor on the project, "as you start to look for the future, you're going to need chronic visual access to the brain."

"You're going to need chronic visual access to the brain."

The most immediate result will be more effective ways to monitor the brain, some of which the team have already tried out. An early study, detailed in an upcoming article in Nanomedicine, showed improvement in OCT imaging when the sensor was moving through clear ceramic instead of solid bone, and Aguilar and his team think imaging methodology will only improve.

Beyond that, the team envisions even more ambitious uses like laser-based treatments or photodynamic pharmaceuticals, dormant compounds that are activated by laser. "These techniques that are being developed show promise," says Rao, "but one of the major limitations is the need to keep opening somebody's head up to get access to the brain." Having a window to the brain would solve the problem, and potentially let doctors perform photodynamic procedures without any surgery at all. Beyond that, the team thinks the window could simplify optogenetic techniques, which have been used in recent studies for anything from modeling Parkinson's to treating cocaine addiction.

But before they can accomplish that, the team needs to figure out how to make a patient's scalp as transparent as his newly developed replacement skull. Aguilar's plan is to infuse optical agents into the scalp, rendering it temporarily see-through. The early results have been promising, but the team is looking forward to proving out the process on living tissue in animals and eventually humans. 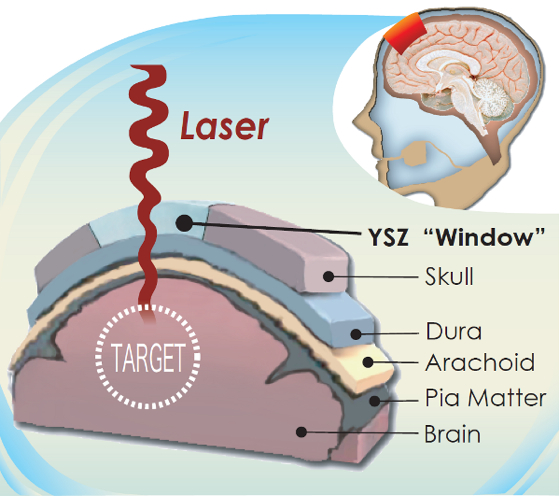 A diagram of the proposed laser treatment process