Congressman hitches a ride in a stealthy self-driving Cadillac

Congressman hitches a ride in a stealthy self-driving Cadillac

Google's not the only entity testing self-driving cars on actual US roads. Today, Bill Schuster (R-PA), the congressman who chairs the House Transportation and Infrastructure Committee, took a 33-mile trip in an autonomous vehicle built by Carnegie Mellon University and funded by General Motors. The 2011 Cadillac SRX ferried the Pennsylvania congressman from the town of Cranberry to Pittsburgh International Airport earlier this morning, while a cameraman broadcast his journey to the web.

The trick: unlike Google's self-driving vehicles, the Cadillac doesn't require a giant spinning array of lasers mounted on the roof. Except for a giant red "Emergency Stop" button in the center console, it looks like a normal vehicle. According to a press release, the car's computers are hidden in the floor, and its "automotive-grade radars and lidars" are "unobtrusively embedded" around the edges of the car. CMU says it can merge onto the highway, change lanes, detect and avoid obstacles and pedestrians, and navigate traffic lights. 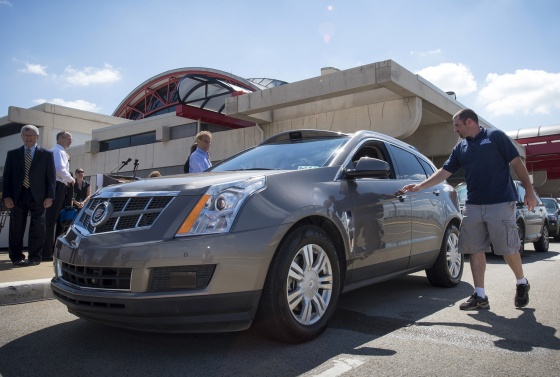 CMU project lead Raj Rajkumar told the Pittsburgh Business Times that the tech might add as much as $5,000 to $7,000 to the sticker price of a vehicle, but it might take a while to arrive: he estimated such a system could be available by the year 2020, as law allows. That's in line with automaker thinking, according to public statements from Nissan and GM, but Google's shooting to bring the technology to market in the next three to five years, even if it has to build its own car to do so.

There's a bit of a history between Google and CMU, by the way. In 2007, Rajkumar's team won the DARPA Urban Challenge to build a driverless vehicle. Stanford professor Sebastian Thrun's team came in second, and he went on to found Google's self-driving car program, among other things.

Pennsylvania State Police were reportedly unaware that CMU and GM would be testing the vehicle on public roads, much less with a congressman inside, but a spokeswoman admitted to Trib Total Media that Pennsylvania has no traffic laws regarding autonomous vehicles yet. For safety's sake, CMU kept a human in the driver's seat for the duration of the trip.

Upon arrival at the airport, the congressman seemed pleased: "Incredible, this trip down here," he said, according to the Pittsburgh Business Times. "This is our future."

Read next: Self-driving cars: Google and others map the road to automated vehicles

More from this stream Self-driving cars: Google and others map the road to automated vehicles