Snoop contains multitudes: testing every product in the Dogg empire

An ever-changing kaleidoscope of entertainment

Share All sharing options for: Snoop contains multitudes: testing every product in the Dogg empire

Like an ancient bottle of bourbon or a good abstract painting, the modern Snoop Lion (née Dogg) contains multitudes. But it wasn’t always that way.

In 1994, Snoop was a simpler creature: a gangster with a knack for showbiz. But then a crew of Bloods crashed the set of the "Gin and Juice" video, and two years later Tupac was shot dead in Vegas — he was playing video games with Warren G when he got the news. "I’m through with that game," he thought, hanging up the Genesis controller, washing blunt smoke down with Olde English from a Swarovski-encrusted chalice, "but I ain’t never done with that chedda."

In 1997 Snoop was the sole rap act on the Lollapalooza roster, cementing himself in the hearts and minds of notoriously white alternative rock fans. He began a transformation into a cartoonish impression of his former self: his growing audience didn’t want a Crip like the ones you see on Cops. They just wanted more Snoop, whatever that was, and he was happy to oblige. 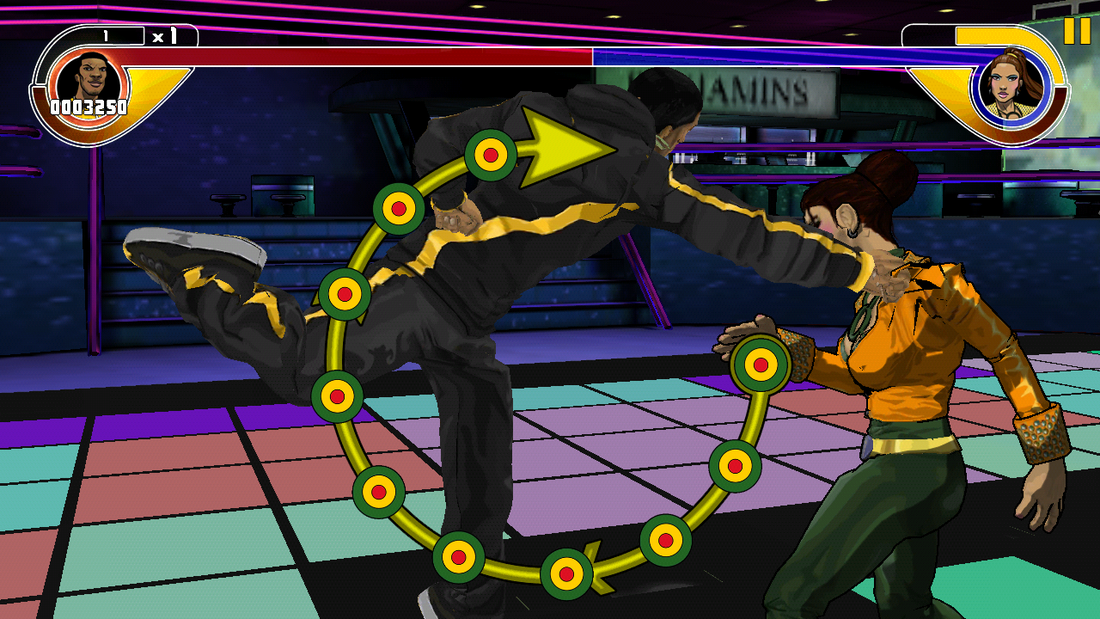 A minute ago she was trying to kill me with flying records, I promise

Prolific isn’t the right word for Snoop’s output — it’s more of an ADHD situation, fueled by an absurdist dedication to bringing stoned ideas to fruition and keeping tha Doggfather’s deep pockets lined. Over the past week I’ve been on something like the Master Cleanse, but instead of cleaning out my colon with cayenne and lemonade I’ve been filling my brain exclusively with weed and Snoop-generated content. Here are some highlights! 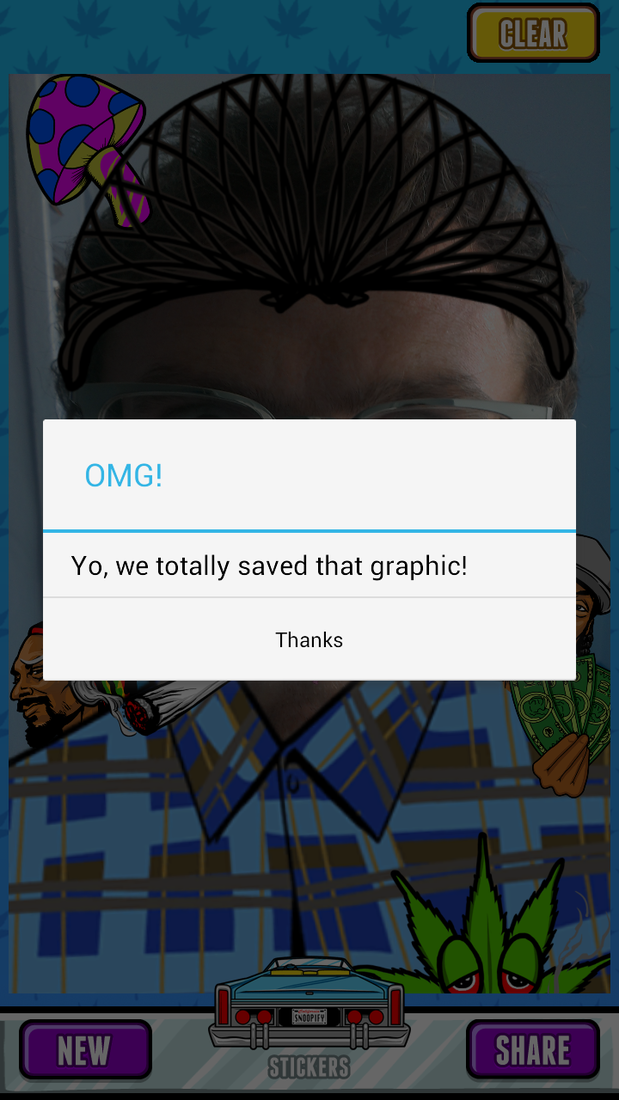 Way of the Dogg ($2.99 for iOS and Android) - This cel-shaded rhythm fighter, sitting somewhere on the metaphysical plane that exists between Elite Beat Agents, Jet Grind Radio, and Street Fighter II, is actually a lot of fun and didn’t completely choke like most fast-paced Android games do. As the mixed martial artist America Jones, I worked my way through a series of trainings with the Lion himself, in his own dojo, which I didn’t even know he had. About halfway through the game a thug kills your girlfriend Sierra. But did you know that Snoop is also the owner of a wristwatch that grants the user time traveling abilities? I won’t spoil the ending for you, but let’s just say that Snoop — who plays himself in the game’s myriad cutscenes — is a more sophisticated businessman than any of us would have thought. A big chunk of the game’s 223MB download size is made up of music, and it's super fun (and weird) to attack your enemies by tapping and dragging to PG-13 edits of "Gz and Hustlas," "Pump Pump," and "Who Am I (What’s My Name)?"

It’s a super-efficient use of Snoop’s licensing potential: he can presumably use the songs in-game royalty-free, and tying the gameplay to the beats themselves brings the player’s brain into a sort of addictive trance. One day, every commercially successful band will need its own infectious rhythm game to rise above the rest. But for now, Snoop sits on top of the interactive music market. If you’re more of a couch-and-subwoofer style gamer, consider the almost-identical $4.99 Xbox arcade version.

Snoopify (free for iOS and Android) is exactly what it sounds like: one of these hack job apps where you put "stickers" on a photo to make it look like you’ve spent too much time with Snoop. You can wear a hairnet, smoke a big J, have some grape soda and a ‘shroom or two; you know the drill. But you have to buy extra sticker packs ($1.08 in-app purchase) if you want even more fun stuff like a 40, a Long Beach football jersey, some Visine, or even a couple of cute little strippers. It’s perfect for reliving your sticker-filled childhood, but instead of being a child you’re just super-blazed and wondering why they didn’t include tax in the base price. 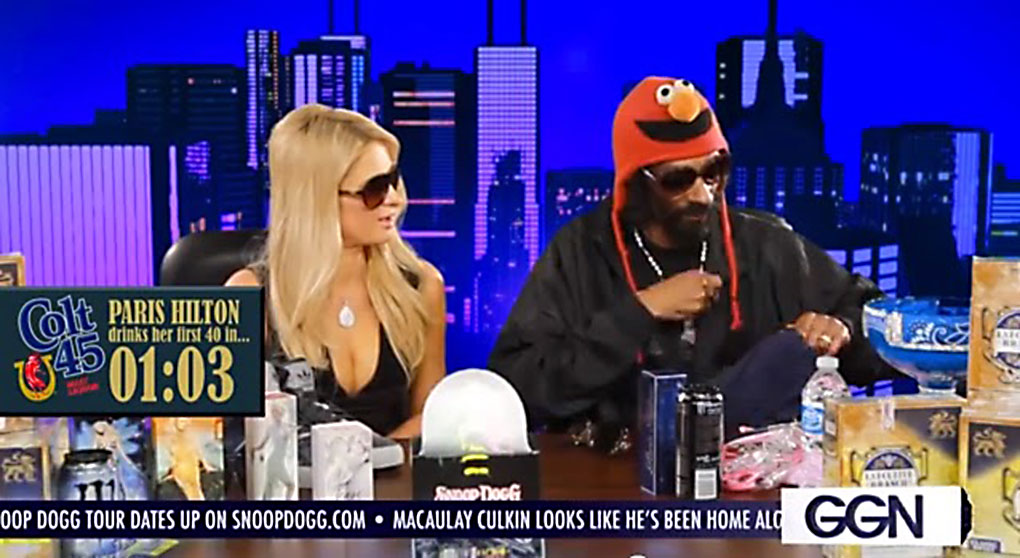 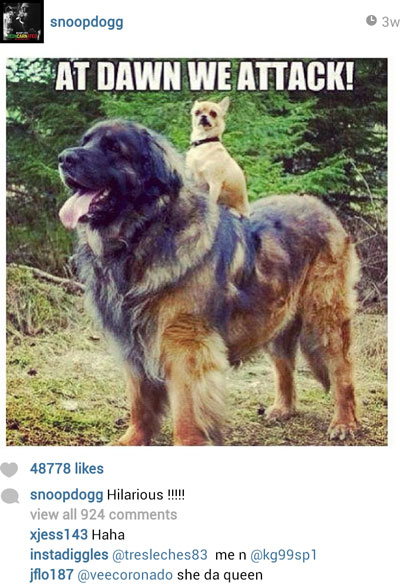 Double G News Network (YouTube) - Snoop has starred in TV shows almost continuously since the early 2000s, and most of them were exquisitely executed, high-budget affairs. But the GGN, a semi-weekly interview series (think The View on weed) hosted by a thinly veiled newscaster called Nemo Hoes, is his most poignant small-screen innovation to date. Last year Paris Hilton appeared to promote the release of her 15th fragrance, but more importantly to drink her first 40 — Colt 45 pulled my favorite advertising stunt of all time when it sponsored an on-screen countdown clock to Paris’ first sip. "You’re like me," Paris deadpans as Nemo sniffs her perfumed arm, "you’re a businessman." Also peep the two-part "Here Come The Kings" episode where Nemo teaches Larry King how to rap and the two men exchange glowing compliments with each other and then for Frank Sinatra with a level of sincerity most of America left behind in the ‘80s. If the interviews don’t suit you, there are always forecasts from weather-stripper Thunderclap to keep you glued.

@snoopdogg (Instagram and Twitter) - Snoop’s social media presence is nothing more than a good reminder that even he is human — more specifically, a human rapper, a subset of the internet population that’s almost universally infected with a severe case of digital diarrhea. His feeds, which appear to be run by him, are boring slices of life that rival the banality of the proudest parents: lots of selfies, photo-memes, and, of course, out-of-focus snaps of children and pets. Celebrities: they’re just like us! 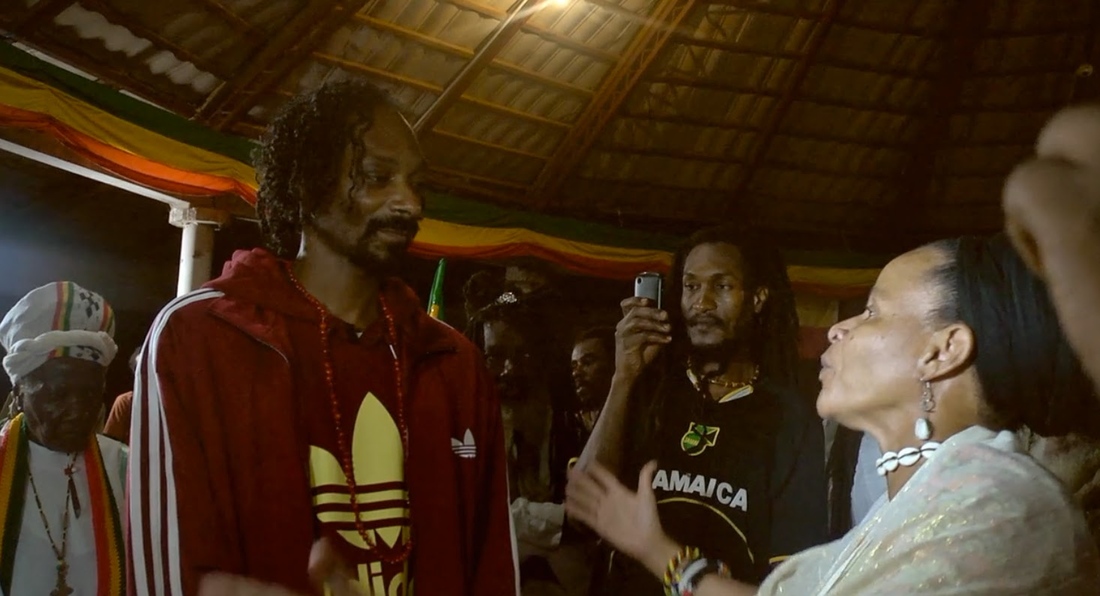 Reincarnated (Netflix) If you’re still confused about what Snoop is really all about, I don’t blame you — we’ll probably never know for sure. But this Vice-produced doggumentary is the closest we can get to a full picture. It reviews his lifelong journey from Compton to Jamaica, where he immerses himself for a month in the Rastafarian culture he considers himself a part of. He visits the Bob Marley museum, records a reggae album at Tuff Gong with Bunny Wailer, gets baptized in a Rastafarian church as Snoop Lion. It’s actually a pretty touching story — Louis Farrakhan compares his transformation to that of Malcolm X, implying that Snoop himself is capable of radical leadership. But when the movie’s over and the smoke begins to clear you remember that this is just one part of the Doggysystem. He takes time during the recording of "No Guns Allowed" with his daughter and wife to reflect: "If I didn’t have to do things to generate money, I would spend all day every day with my wife and kids. But I find myself spending all day with my dreams and my job and spending a few minutes with my wife and kids. So I wanna try to reverse that."

At its core, Snoop’s world is an ever-changing kaleidoscope of entertainment that prioritizes weed and money above just about everything else, and a complete reversal of that seems a little outlandish. But I get the distinct (stoned) feeling that he just might be making a move towards stay-at-home-doggfatherdom while remaining the businessman he is. And you can bet your last bud he knows how many ads he could sell on (another) reality series about that phase of his life.