Lenovo adds flexible hinges to even more laptops, including its best Yoga yet

Share All sharing options for: Lenovo adds flexible hinges to even more laptops, including its best Yoga yet

Lenovo is one of many PC manufacturers convinced that the traditional laptop form factor is on its way out — and the company is doing a better job than anyone at figuring out what's next. It's bet primarily on its rotating Yoga hinge, which swings seamlessly from a traditional laptop look to far more touch-friendly modes.

The Yoga 13 was one of our favorite Windows 8 laptops, and now the Yoga family is growing by two models: the Yoga 2 Pro and the ThinkPad Yoga. Both notebooks support up to the new Intel Core i7 Haswell processors, and feature displays that can flip a full 360 degrees. But there's plenty more to like about the new models.

The Yoga 2 Pro improves a laptop we already liked

The new, $1,099.99 Yoga 2 Pro has been refined in all the right places — it's thinner, lighter, and more powerful. Whereas the previous Yoga was still a little bigger and heavier than the MacBook Air or the ThinkPad X1 Carbon, the Yoga 2 Pro compares much more favorably to the lightest and most portable notebooks out there. There's also subtle improvements, like backlit keys and the power button moving to the side rather than remaining on the front. 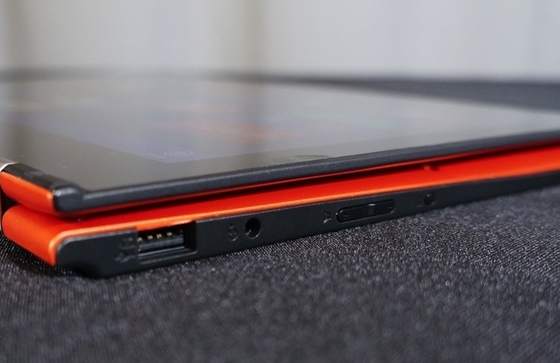 The upgrades make the Yoga 2 Pro look and feel really sleek, an even more modern design than last year's model. The display is still 13.3 inches but now packs an impressive 3200 x 1800 pixels, compared to the 1600 x 900 resolution of the previous model. Viewing angles were fantastic when I tried the device, and given how many different ways you can use the device a high-res screen is a huge advantage.

A flexible hinge for ThinkPad users too

It's not quite as thin or high-end, but the $949 ThinkPad Yoga gets business users in on the flexibility too. Its 12.5-inch screen is slightly smaller, and not quite as high-res, but can come as high as 1080p. It also goes up to Core i7 processors, 1TB of storage, and all of Lenovo's security features.

In at least one way, the ThinkPad Yoga is the best Yoga yet: its "Lift n' Lock" system for putting the device into tablet mode. The body of the notebook raises slightly to become flush with the keys when the display flips all the way around, so there's no more awkward exposed keyboard underneath your fingers. The Lift n' Lock system was apparently left off the Yoga 2 Pro for size reasons, but it feels great on the ThinkPad Yoga.

The Yoga brand is still reserved for premium devices, but the pliable hinge is coming to the lower end as well. The new Flex 14 and Flex 15 aren't quite as flexible — the lid only rotates 300 degrees rather than 360 degrees — but they still flip easily into a handy "stand mode." Lenovo said it found that Yoga users used that mode, where the keyboard acts as a stand for the display, far more than any other. We're assuming that doesn't include the traditional laptop mode, but stand mode is great for watching movies or TV shows.

Both the Flex 14 and 15 support up to 4th generation Intel Core i7 processors. They're not quite as sleek as the new Yogas, but still feel like solid notebooks with solid hinges and good displays — they're 1366 x 768 by default, but you can and should upgrade to 1080p. And we're still smitten with the Clementine Orange accents on the otherwise black device, too. At $629.99 and $829.99 for the 14- and 15-inch models, they're still not cheap machines, but they're far more accessible than your average Yoga.

There's also a giant version of the convertible: the Flex 20 All-in-One. The $899.99 machine has a 19.5-inch touchscreen and can used flat on a table or with the display tilted. Although it shares the Flex branding, it has a lot in common with the IdeaCentre Horizon we saw at CES.

We've been saying for a year that Lenovo did something right with the Yoga hinge, and we're happy to see it come to more and more varied devices. The Yoga 2 Pro is one of the best devices we've seen so far at IFA, and should keep Lenovo at the top of the PC pack for a while longer.