Will anybody ever get mobile payments right?

Hill Ferguson ordered a smoothie. Using a newly redesigned app for iOS and Android, PayPal’s lanky vice president of global product selected a peach concoction and paid for it with a couple taps on his smartphone. A few minutes later, he walked to a nearby Jamba Juice, strolled in, and was handed his beverage. No wallet, no credit card, and no waiting for anything: this is PayPal’s vision of the future, and it’s coming into focus today.

The new PayPal app, which reimagines nearly every part of the previous app and adds a raft of new features, is designed as a full-fledged digital wallet. "The people have spoken, and they’re very clear when they say they want to carry their phone," Ferguson says. "That’s the thing that matters the most to them: if you can replace all the utility that a physical wallet has in the cloud … that’s the goal for us. We’re by no means declaring victory on this. But we feel like we’re ready to make a big push and tell the world about it."

The most fully featured payment app to date

The app might be the most fully featured payment app to date. It can store your credit cards, send and receive money, and open a credit line on your behalf. It can find local deals, make purchases inside stores that use PayPal, pay for your bill at a restaurant, and order ahead, as Ferguson did, at Jamba Juice. About the only thing it can’t do is make any of that feel as simple as swiping a credit card. It’s the problem every mobile-payments app suffers from, in one way or another. Google Wallet’s struggles are legion; Isis, a solution created by the carriers, has been slow to launch. Why hasn’t anyone gotten it right?

Developers of digital wallets are forever promising to make our lives easier. In practice, though, using a phone to pay rarely improves on the experience of swiping a card. Square became an early leader in mobile payments by using phones’ GPS sensors to let users open tabs at their favorite shops and pay for things just by saying their name at the register. But in the year since it signed a deal to process payments for Starbucks, no other mass retailers have adopted it. 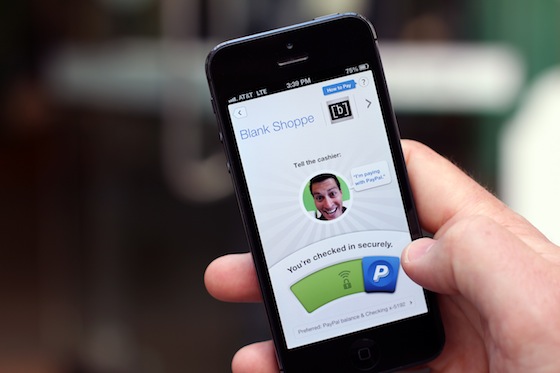 PayPal, which has more than 132 million active users in 193 countries, would appear to be in a position to crack the mainstream. The eBay-owned company has the financial resources, the software engineers, and the user base to push the digital wallet forward. And yet while the company is enabling tons of mobile payments — it expects $20 billion in transactions this year — the user experience has felt more like a website ported to an app than a futuristic way to pay. The heart of the old app, launched in March 2012, was account management: tracking purchases, sending and requesting money.

The new app turns that approach on its head. "We’re going to try to make sure people have a much better retail shopping experience," Ferguson says. "We’re really focusing on the parts of the experience around the payment — before and after — not really the payment itself." When you open the new app, instead of being asked to enter your PayPal password, you’re greeted with a list of nearby businesses that accept PayPal.

From there, though, things grow more complicated. For starters, the user interface is glaringly inconsistent across different uses. Some tabs have an older, skeuomorphic ledger reminiscent of the previous app, complete with fake stitched leather. Others embrace the flatter style of iOS 7, abandoning virtual textures in favor of bright colors and crisp typography. A navigation bar that explains the app’s four core uses has trouble articulating which tab contains what; if you wanted to pay your bill at a restaurant, would you tap ‘wallet,’ ‘activity,’ or ‘transfer’? (The navigation bar also comes and goes as you tap through the app, largely defeating the purpose of having one.)

And it’s frustrating, because the features all actually work. On a recent afternoon in San Francisco, Ferguson walked a reporter through the various new ways to pay, from buying socks at a clothing store to ordering fries at a restaurant. Paying was fast and functional at every stop. And yet it’s difficult to imagine many people taking the time to master the new PayPal’s many different features.

Recently on his blog, investor and former Twitter executive Satya Patel wrote about how apps succeed by doing a single thing spectacularly well. "WhatsApp, Instagram and Shazam are great examples of products and companies that expertly address a single, well-defined need in a simple way that satisfies a large number of people," he wrote. "A single-purpose app makes it easier for a user to remember why she should use that app at the moment that she has a specific need."

In praise of the humble credit card

We pay for things in so many different ways that it’s hard to devise such an app to handle our payments. Meanwhile, the humble credit card remains a tremendous single-purpose tool for spending money. Whether buying smoothies or socks or a restaurant meal, we use it in the same way each time: by handing it to someone to swipe. We might lose out on the ability to order ahead or pay for a bar tab without calling the server over, but we gain immeasurably in speed and ease of use.

The new PayPal app is powerful and forward-thinking. It does most of the things we say we want in a payment app. But until the developers who are building digital wallets can make them simpler than physical ones, most of us will keep buying our smoothies the old-fashioned way.