This is the IFA of Windows tablets. And for Toshiba, it's also the first time the company has decided to foray into the market at all. "We just didn't believe there was a robust experience to be had there," reps told us. But with Windows 8.1 right around the corner, the company's diving in with two different models: the 8-inch Encore tablet and the 13.3-inch Satellite Click, a detachable laptop.

Toshiba's clearly excited about the half-kilogram Encore — "smaller is where it's at," they told us. It's not quite a full-powered Windows PC, opting for an Intel Atom processor (the Bay Trail T) instead of the more powerful Core. That compromise let Toshiba make a fanless slate with long battery life; and from the plethora of ports to the bundled version of Office Home and Student it's still a versatile Windows PC. Toshiba's been working closely with Microsoft on the product, they said, enabling a device that's both Skype-certified and well-tuned for Windows 8.1. At $329 it's also one of the cheapest Windows 8 tablets we've seen, and it's not even that much more expensive than Office itself 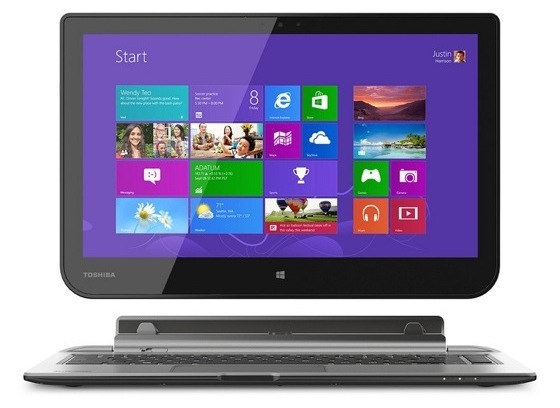 Price is a big deal for Toshiba this year — the new Satellite Click, they said, was purpose-built to reach its $599 price point. It's a 13.3-inch laptop with a detachable keyboard and touchpad, but even in tablet mode this is a full-powered PC. It's not at all a high-end PC, thanks to a 1366 x 768 display and AMD's A4 processor — but Toshiba promises to make up for the underwhelming specs with spectacular battery life. There are batteries in both keyboard and tablet, and AMD's new processors have impressive longevity; we've rarely seen full-fledged Windows 8 tablets get good battery life, and Toshiba could be the first. The Click brings detachable devices to a new price point, even if it's not a particularly impressive model itself.

For Toshiba, everything starts with price

In between the two models is the new Satellite NB15T, a standard 11.6-inch clamshell laptop that's designed to provide a mainstream alternative to the MacBook Air. It uses an Intel Celeron processor, along with a 500GB and 4GB of RAM — like the Click, it's certainly not the best laptop you can buy, but Toshiba's right in identifying a price point above Chromebooks but below ultrabooks where there are few good options.

While so many manufacturers lean toward the higher end of the laptop spectrum, Toshiba's looking to take over the price ranges others are leaving behind. If it can bring even some of the quality from devices like the Kirabook and even some of its lower-end laptop lines, it might be a winning strategy.