At $399, Ricoh's brand new Theta camera — which captures 360-degree spherical panoramas in a single shot — won't be for everyone. Even if that price were halved, we imagine many people wouldn't want to spend so much on a tool they'd likely only use in rare instances. But if you are looking for a camera that can record everything around it with a single press of the shutter button, this is among the more compact options we've seen. The Theta contains an "ultra-small" twin-lens optical system that captures any given scene around, above and below the device. 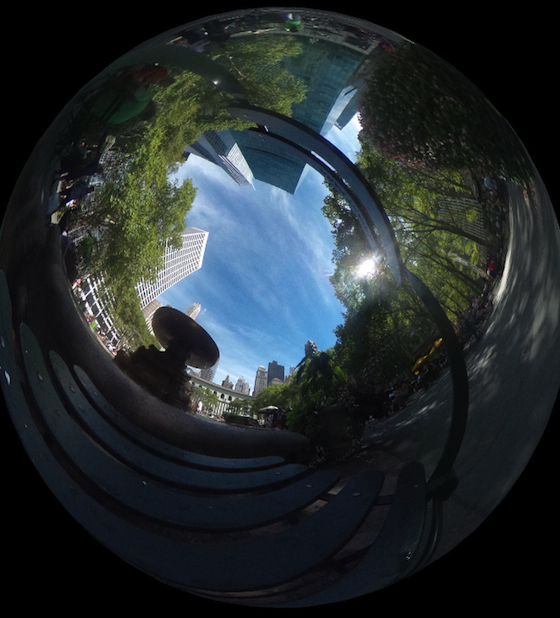 There's no display anywhere on this pocket-sized camera, but you can review any spherical images you've taken by way of an iOS app. (Android support won't arrive until later this year). The two are linked via an ad-hoc Wi-Fi network on the Theta, which perhaps contributes some to that high price tag. You simply join the network on your iPhone and can immediately use your phone as a remote shutter. This all worked perfectly in our brief test; just don't walk too far from the camera or your connection will drop. Don't expect stunning imagery from the Theta either. It does just fine in daylight conditions, but as our sample gallery illustrates, low light photos are terribly noisy. You can't adjust much in the way of settings with the Theta. An exposure slider in the iOS app is your only real means of influencing the final image.

Photos can be manipulated and recomposed with the mobile app, but there's no easy way to save these shots without taking a screenshot as we did above. When exported to your desktop, Theta's photos take on the flattened appearance you see below.

Your panoramas can be uploaded (in their original spherical form) to Ricoh's Theta website and then shared to Facebook, Twitter, and Microsoft's Photosynth. The use cases here are obviously limited, and there are also plenty of (far cheaper) smartphone apps that capture spherical photos, albeit none that can do so in one shot. If you're interested in this unique cam, Ricoh will start taking preorders in the United States, UK, France, and Germany this month.