Update: The LADEE spacecraft successfully blasted off last night, creating a fireball that could be seen down much of the Eastern Seaboard. You can watch NASA's launch video below, or look through a set of photos submitted by enthusiasts from Virginia to Massachusetts.

Original: A new NASA spacecraft that launches today for the moon seeks to answer a 40-year question about our nearest celestial neighbor. Back on the Apollo 17 mission, as the command module orbited the moon, Commander Eugene Cernan caught sight of what he described as "streamers" — an aurora borealis-like effect bursting from the lunar horizon. (You can see Cerman's sketch of the "streamers" below.) Now, today's planned launch of the Lunar Atmosphere and Dust Environment Explorer (LADEE) means that NASA will be able to closely investigate the lunar dust and thin atmosphere around the moon, an investigation that will hopefully yield clues on what the streamers were that Cernan saw all those years ago. 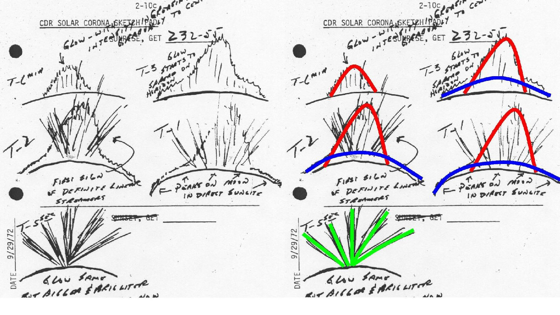 LADEE program scientist Sarah Noble spoke with Space.com to give more details on what NASA hopes the spacecraft will find once it enters orbit around the moon in approximately one month. Noble says that it's "an ideal time to go and take a look at [the moon] while it's still in its pristine, natural state." With increasing interest in visiting the moon from both the US and other international space agencies, Noble is excited to see what can be learned since there have been relatively few lunar investigations and landings in recent years.

LADEE will try to solve a decades-old mystery

As for the "streamer" phenomenon, Noble says that the common theory is that it was caused by "very tiny particles of dust getting lofted tens of kilometers up into the sky," but that's just a guess — now, LADEE should be able to find out much more. "This is finally an opportunity [for us] to go and follow this mystery that has been puzzling scientists for almost 50 years," she says. "We're very excited to finally get an opportunity to understand what the dust environment is going to be like around the moon."

The streamer investigation is hardly the only thine that LADEE will be investigating — NASA will also be testing a laser-based space communication system that will theoretically operate at the same speed as a top-tier broadband internet connection on Earth, but over a 238,900 mile distance. The data LADEE collects will also be used to help NASA with future manned missions to the moon — moon dust is a lot more "difficult" to deal with, so LADEE's tests could help the agency design future equipment that can stand up to the harsh moon environment. The craft, which is scheduled to launch tonight at 11:27PM ET, will orbit the moon for about three months once it arrives, after which it'll go into a controlled crash on the lunar surface.