There really are a lot of products announced each week, and that’s truer than ever when a major electronics show is happening. This week, that's IFA. So rather than diving deep into a couple of new devices, we're taking a look across a bunch of products that were shown off at the event to get a better picture of what the conference floor looked like. 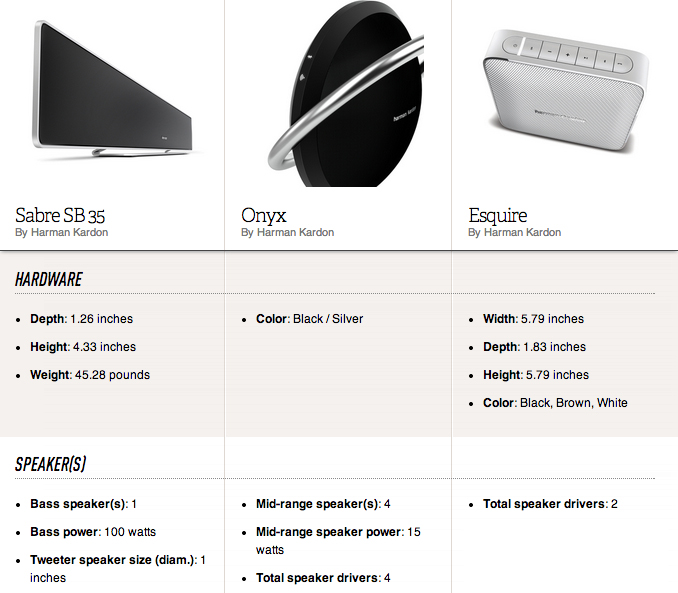 Harman Kardon announced three slick looking speakers at IFA. Two of those, the Onyx and Esquire, are small, portable sets meant for wirelessly playing music. They both connect over Bluetooth, but the Onyx also includes AirPlay, DLNA, and NFC. Aside from coming out ahead on wireless flexibility and sonic power, the Onyx also leads on looks: it’s a large black disc surrounded by a shining metal halo that works both as a kickstand and a grip for toting it around. The Esquire, on the other hand, is meant to be much more portable. Harman Kardon says that it has 10 hours of battery life — so much battery life that it's even included a USB port for charging a phone off of.

The company’s other big reveal was the Sabre SB 35 soundbar, which it says should be the slimmest sound bar you've ever seen — slimmer, in fact, than even your HDTV set. It’s an 8.1 channel set that also includes Bluetooth for playing music off of it wirelessly. It comes in at $999, but Harman Kardon is offering a lower-end and substantially thicker version with nearly the same name for $599 too. 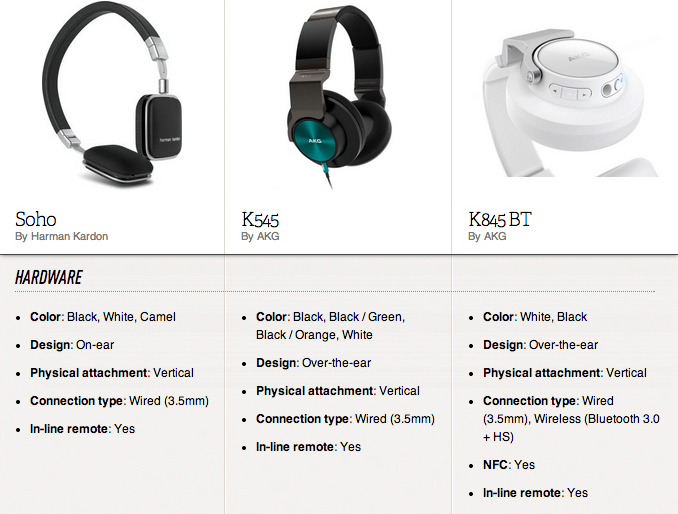 More than a few headphones made their debut at IFA too. For the most part, their manufacturers haven't detailed them in full, but they were still put on show for all to marvel at their style. And style mixed with substance seems to be a theme: AKG showcased two separate headphones, the K545 and K845 BT, and both come with stark, modern looks. The K845 BT is the higher end model — coming in at €299 (about $394 USD), just €50 more than its sibling — and is certainly the more enticing of the pair. It includes controls built into its earpiece, and it allows for wireless listening over Bluetooth or NFC.

Harman Kardon's headphone lineup is still small, but it introduced a brand new model this week that'll make it just a little bit bigger. Not by much in a physical sense, however: the new Soho headphone has a fairly trim build and a retro-styled look with square earpieces. It's set to come in white, black, and brown, and include playback controls along its cable. 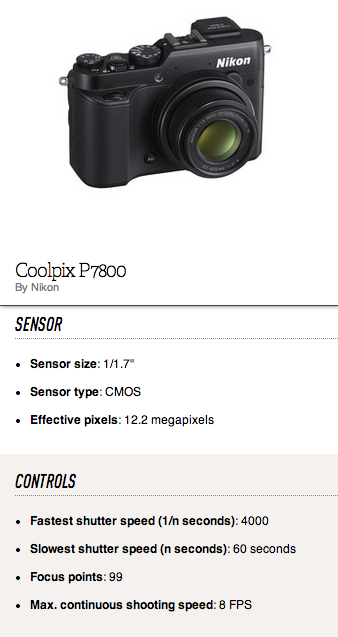 A few weeks ago, Canon unveiled the PowerShot G16. This week, Nikon detailed a new competitor for it, the Coolpix P7800, its successor to the P7700. The camera is aimed straight for photography enthusiasts looking for a portable point-and-shoot with plenty of controls and creative flexibility, but willing to live without the absolute finest image quality around. The P7800’s 1/1.7-inch sensor is among its weaker points — especially for a $549.95 camera — but its wealth of manual controls and flexible zoom range make for a clear appeal to certain shooters.

The P7800 also sees the return of a viewfinder to the camera series, but this time around it's electronic. The camera otherwise hasn't changed much: its lens has a range between 28 and 200mm and ranges between F/2.0 at its widest and F/4.0 at its full telephoto length.

There were a ton of other additions to the database this week, but here are a few others that stand out:

If you want to learn more about any of the products mentioned above, all of our information on them can be found through the database box located beneath the article. For more on speakers, headphones, and just about every product around, you can check out the full Verge Database right here.