Carnival games: my journey through 'Amnesia: A Machine for Pigs'

It's so dark in here

Share All sharing options for: Carnival games: my journey through 'Amnesia: A Machine for Pigs'

For years, Swedish developer Frictional Games has pulled off a difficult balancing act: creating gaming’s equivalent to clever and competent genre fiction. It has built its name doing horror better than just about anyone else, bucking the clichés of both AAA shooters and bare-bones indie games while drawing elements from both. In some ways, it does this by stripping gameplay to its core: after giving players a clumsy pickaxe in its first game, the studio quickly dispensed with weapons altogether, forcing players deeper and deeper into mysterious environments populated by enemies they were powerless to fight.

But the games have always been driven by the mechanics they leave in — traditional adventure game elements that force you to pay attention to the environment, penalties for looking at enemies that keep you from getting comfortable. Given this, its latest game, Amnesia: A Machine for Pigs, is an interesting beast. Though a sequel to Frictional’s Amnesia: The Dark Descent, it’s developed primarily by The Chinese Room, a small team known for its experimental narratives. Dear Esther, created first as a Half-Life 2 mod, asks players to walk around an island while hearing fragments of a story. Though it’s almost universally described as a moving narrative, there’s little for the player to do, and there’s an ongoing debate over whether it counts as a game at all. A Machine for Pigs is more interactive, but it raises a similar question: what do Frictional’s mechanics bring to these stories? And how far can you go in paring them down? 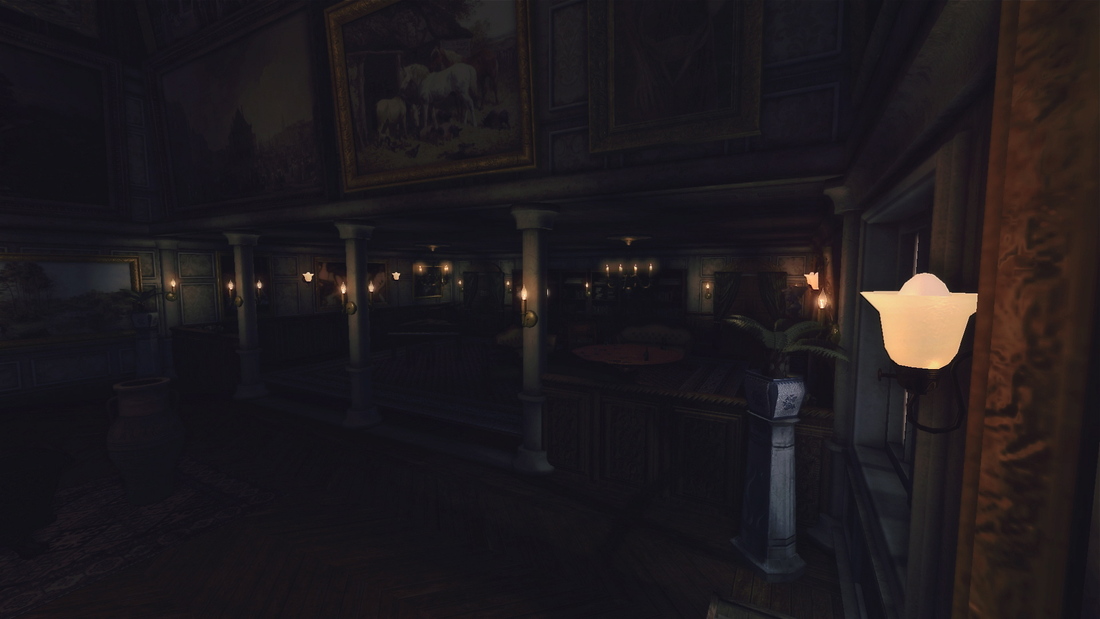 A Machine for Pigs draws its DNA from its predecessor Amnesia. Its aesthetics are those of a first-person action game, but controls are based on the unusual idea that your mouse is a hand — if you’re opening a drawer, you click and slide; if you want to spin a wheel, you start drawing circles. It’s atmospherically clumsy, driving home the panic of frantically dragging a door shut and blocking it before something can chase you down. Amnesia used darkness as both cloak and weapon: you could hide from monsters, but your nyctophobia would eventually make you lose control.

That darkness, though, was never as complete as A Machine for Pigs’. At times it’s virtually impossible to tell where you’re going even with your dim lamp, a device you’ll use sparingly for fear it will alert your enemies. Let your focus drift and you’ll be hopelessly lost, stumbling in circles through the shadows. Break into a run and turn on a light, and you may be dead before you find your way back. It’s frightening, disorienting, and terribly effective, all the more so because of composer Jessica Curry’s haunting score.

As 'A Machine for Pigs' takes out the small victories of gameplay, it becomes more focused on its own narrative win condition

More so than Amnesia, though, the game feels like it’s stuck between being a thing you experience and a thing you play. In the ongoing conversation over what constitutes a game, there’s sometimes an assumption that "serious" or immersive games are better off without traditional methods of winning and losing. The game "should not be played to win," says a card at the beginning of both Amnesia and A Machine for Pigs. "Instead, focus on immersing yourself in the game’s world and story."

Though Amnesia was never particularly puzzle- or action-heavy, Frictional used both elements to flesh out its world. If you weren’t in hiding, you were keeping yourself from going insane — as your sanity slipped, the game got harder to control — or solving increasingly morbid puzzles. These were sometimes ridiculous; at one point your character must inject himself with a makeshift vaccine found in a corpse’s blood. But they paced the game’s narrative, leading you to breadcrumbs of plot and giving tantalizing hints about the place you inhabited. 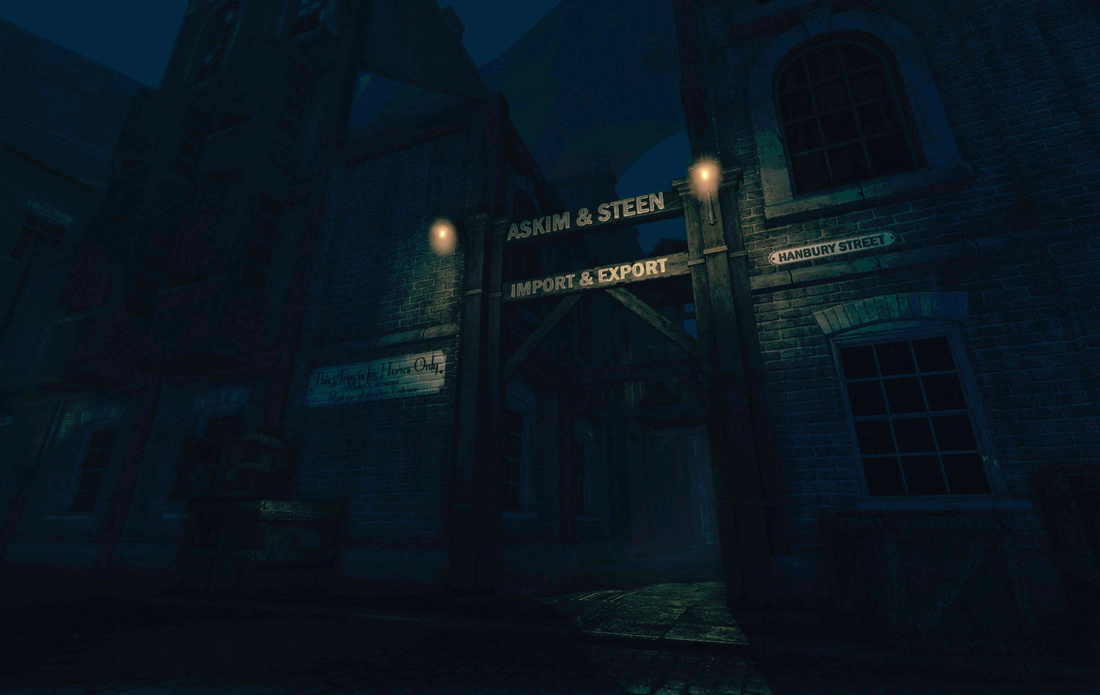 A Machine for Pigs keeps the hiding, and the sheer confusion it invokes does the series proud. At times, the map itself will shift, throwing you somewhere you’ve never seen or creating places that exist only while you walk through them. But despite this, I kept wanting more chances to explore and learn. The puzzles no longer seemed to hold interesting environmental details or give me an a-ha moment — I’d flip a switch, turn a wheel, and move on. I rarely felt like I’d found anything; if anything, I was being herded down a path I was only allowed to stray from for a few minutes at a time.

The story is paramount here, conveyed almost entirely through gramophones, diary entries, and a voice on the intercom as protagonist Oswald Mandus walks deeper and deeper into a factory to find his two sons. Set in 1899, it’s a tale of millenarianism and delusion, its characters enthralled by a techno-utopian terror of filth and weakness — and, by extension, humanity itself. The machine (for pigs) is every system that promises immaculate civilization while relying on the underclass it despises, a cleansing crucible literally sustained by offal and excrement. The credits end, unsurprisingly, with a quote from Leon Trotsky.

For all the narrative's grand import, it rarely rises above its clichés

But for all the narrative’s grand import, it rarely rises above its clichés. A Machine for Pigs plays on the same theme as the original Amnesia: the player character is on a quest for redemption after committing unspeakable acts they no longer remember. In Amnesia, the tormented protagonist seems genuinely overwhelmed by what he’s done, painted as a terrified naif manipulated by forces he can’t understand. A Machine for Pigs’ Mandus, though, is a cipher, the kind of man who will shout: "With only a small sacrifice we can hold the apocalypse!" and then wonder where it all went wrong.

It’s implied that Mandus too is manipulated by something, but we’re never allowed to see him lucid, leaving only a cartoon madman making speeches. His grandiose mechanical creation is described as a kind of god, but it’s neither mysterious nor awe-inspiring nor even particularly depraved — when he decides to stop it, you don’t feel either incredible relief or frustration at destroying something amazing. In fact, the game’s most sympathetic characters are its monsters, maybe the only creatures you see as more than symbolic figures. Late in the game, one throws itself at you from behind the bars of a cage. After jumping from the shock, you prepare for it to come back, but it's sat down heavily and buried its head in its hands. 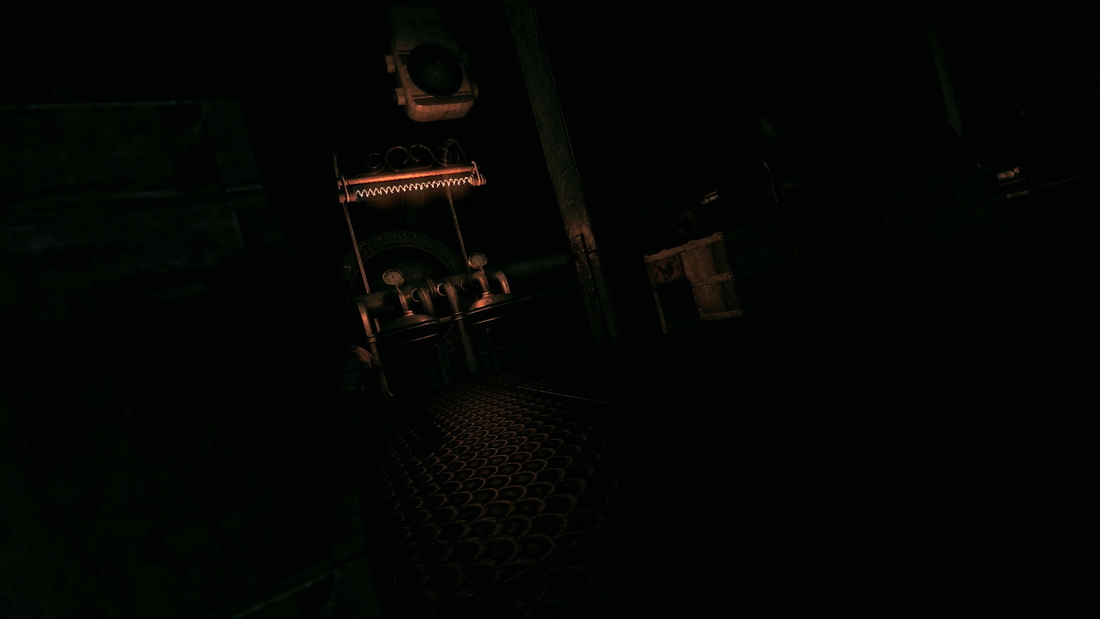 The game sets out to be frightening, and it is; it sets out to tell an engrossing story, and sometimes it does — you’ll find a great bit of prose, or a gorgeous level set off perfectly by Curry’s music. It’s just frustrating, because it could have been so much better. Plotlines could have been less obvious, prose less purple. More than that, though, the structure itself seemed flawed, focused on delivering a certain set of events in a certain order — and far too often by telling rather than showing. The beautiful, disturbing environments felt like window dressing, overwhelmed by the stream of journal updates describing things that just happened and things I needed to do. At one point Mandus writes a paragraph-long journal entry in perfect Lovecraftian prose, urging himself to run from something as it breaks down the door.

The scripted monsters that seem to disappear before you’ve escaped them, the doors that keep you on task by slamming shut seconds after you’ve passed, they all create narrative moments, but they also remove your feeling of agency — not power, but just the sense that your actions matter. I spent a lot of Amnesia: The Dark Descent running around like a maniac. I spent a lot of A Machine for Pigs getting to the magical door or staircase that would make my problems go away. Focusing too hard on arbitrary skills can kill an immersive game, but the opposite is also true — I don’t feel engaged when I’m in the equivalent of a haunted house carnival ride.

Not every interactive story has to be gamelike, but gameplay doesn't have to be cut to make way for story

I certainly don’t think every piece of interactive fiction needs to be traditionally gamelike. There’s a big space for purely aesthetic "notgames" like Dear Esther. A Machine for Pigs gets a long way on pure confusion, but the mechanics were there; they were just neglected or taken only halfway, so as not to distract from the story. It’s a bit like seeing a literary author attempt science fiction or horror poorly: they may know the elements of the genre, but they pay them little attention, assuming that going through the motions should be dead easy, formulaic.

But gameplay doesn’t necessarily need to be dialed back to tell a good story — and Frictional’s entire history proves it. Even after tracing months of Mandus’ life in A Machine for Pigs, I didn’t feel like I’d uncovered a mystery. I felt like I’d been handed something I was supposed to take seriously, but not something that cared enough about earning my respect.