For this spinning laptop design, the third time's the charm

Last fall marked a renaissance in laptop design. With Windows 8 on the horizon, manufacturers built truly exciting notebooks with high-res touch screens, clever back-flipping hinges, superb construction, and even displays on both sides. With touch screens as a focal point, it seemed that laptop manufacturers were finally ready to compete with Apple and offer premium laptops that were actually worth buying.

When those laptops actually arrived, though, they weren’t the winners we’d hoped. The primary culprit was battery life: gorgeous laptops like the Acer Aspire S7 couldn’t last more than a few lousy hours on a charge.

Now, with new battery-sipping Intel processors inside, those Windows machines are finally coming into their own. That same Acer Aspire S7 now clocks in at seven hours, and it’s not the only sharp tool in Microsoft’s shed. The Dell XPS 12, its screen-flipping counterpart, has the very same processor. Let’s see if a battery bump is enough to make Dell a winner.

Never mind airplanes: the XPS 12 is the perfect laptop for commuter rail. When I had to take Caltrain to San Francisco last week, two grippy rubber strips held the 3.35-pound laptop on my actual lap, instead of sliding off my wrinkle-proof pants and clattering to the ground like any number of wedge-shaped competitors. 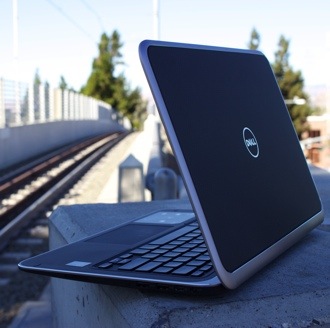 When I got stuck in a particularly cramped seat on the return trip, with no room to fully open the lid, I simply spun the screen 180 degrees, effectively turning the 12.5-inch display into a touch screen tablet with a strong folding stand. It’s a clever design that Dell’s been working on for years: simply push the bottom edge of the screen with your thumbs, and the lid and screen change places inside their rectangular frame like a revolving trapdoor.

That means you can lay the screen completely flat like a tablet, or stand it up vertically, which I find wonderful for browsing webpages or keeping track of TweetDeck. You can do the same thing with other folding laptops, even ones as inexpensive as the $800 Lenovo ThinkPad Twist, but the high-quality screen on the XPS 12 makes a world of difference. What you still can’t do, unfortunately, is flip the lid partway and type on the physical keyboard underneath it, like the Acer Aspire R7’s "Starship Enterprise" position. The machine’s clearly designed to be used with the screen fully open or fully closed, not anywhere in between, and that’s a bit of a shame. 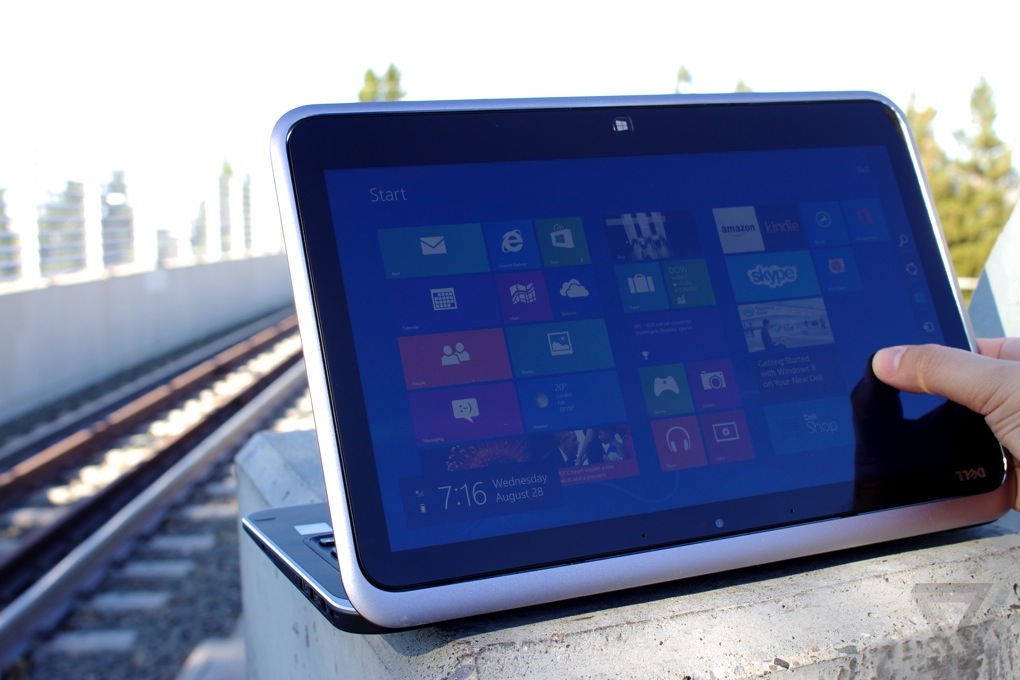 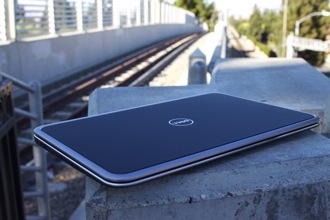 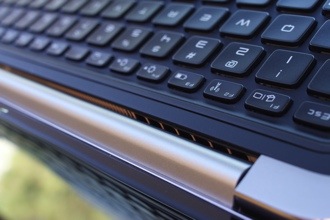 Dell products aren't always sleek, sophisticated tools, but the XPS 12 certainly looks like one. The two-tone black and silver construction might look simple on Dell’s website, but in person it’s immediately evident that the company built a quality product. The textured carbon-fiber weave, the beveled aluminum edges, and the smooth, black rubber surfaces look and feel fantastic.

And then there's that gorgeous 1080p screen, the center of the experience. It's simply clear and bright and crisp and colorful from any angle. The high resolution means it can be a little tough to stab at tiny icons (which is mostly Microsoft’s fault) and the glossy glass surface can pick up loads of glare, but both make particular sense in tablet mode. When you hold the machine up to your face, images stay crisp and fingers glide smoothly towards your touch screen targets on that glassy 1080p surface.

Some other tradeoffs for the tablet form factor don't make quite as much sense, however. It's nice to have a dedicated volume rocker, bump-resistant power switch, LED battery-life indicator, and particularly an orientation lock switch all accessible with the lid closed, but they come at the expense of other ports. The machine's two USB 3.0 sockets and Mini DisplayPort are all cramped together on the right edge, and there's still no SD card slot. The weight of the machine makes it prohibitive to use as a tablet for long periods, so it would have been nice if Dell focused a little more on the laptop experience. 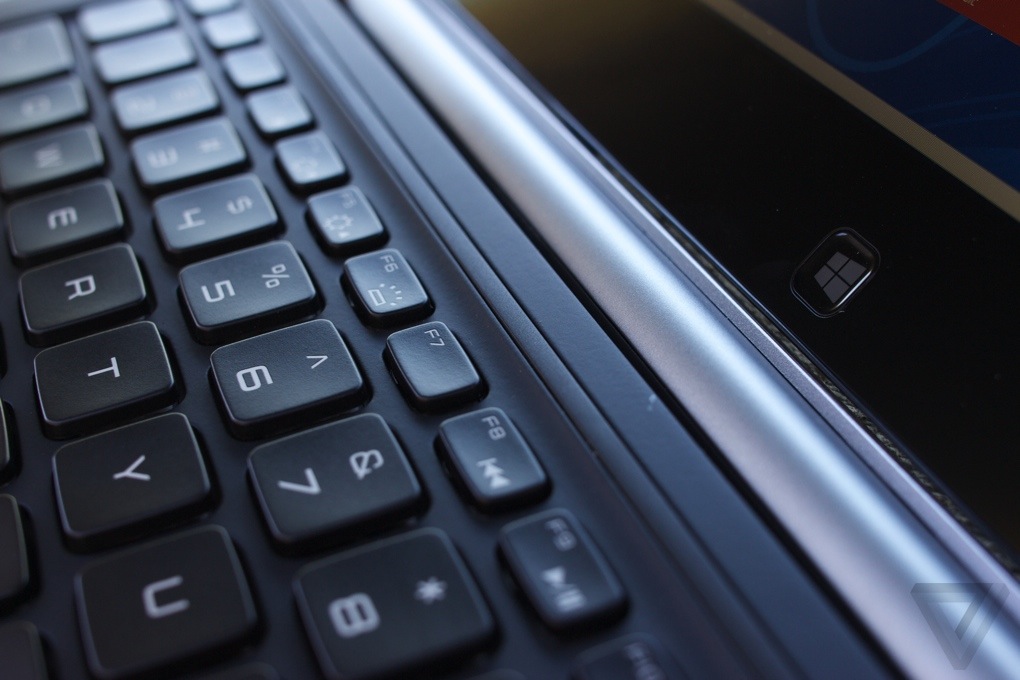 For the most part, the XPS 12 feels just as good as it looks, containing a strong frame and a comfortable keyboard with plenty of room to depress each key. I typed every word of this review on the XPS 12 itself, and my only complaint is that the keys feel like they need to be worn in. They're a little too springy. 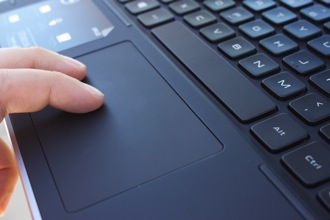 Incredibly, Dell also managed to eke some decent audio quality out of the fairly tiny laptop. It's surprisingly loud and full: I've been listening to Pandora Radio for hours during my testing, and have been consistently impressed with how well the tiny speakers perform. They’re perhaps the best I’ve ever tested on a machine this small.

The one major weak point is the touchpad, which just can't seem to reliably detect two-finger gestures at all. For every five times I managed to smoothly scroll through a webpage, another time I'd find myself instantly and inexplicably at the bottom of the site I was reading, or find the XPS 12 had decided to move my mouse cursor instead of the article. Slowly but surely, I found myself using the touch screen for such things. It’s not a dealbreaker, but it’s extremely annoying.

Just like Acer's Aspire S7, the Dell XPS 12 originally came out last year, and it's basically the same laptop except for a few tweaks under the hood. Dell added a slightly brighter 400-nit screen, faster 802.11ac Wi-Fi, a slightly larger 50Wh battery (up from 47Wh), an NFC module for tap-to-pair headphones and other such devices, and a Kensington Lock slot. Most of these aren’t terribly important additions (how many people have 802.11ac routers or NFC headphones?) but they’re all welcome.

One addition matters most: that battery-saving Haswell processor. Though today's XPS 12 feels just as capable as the one I tested last year — games like Borderlands 2 chug even at the lowest settings, but your standard array of programs runs like a charm — the new Intel Core i5-4200U processor gave me loads more battery life.

I saw 7 hours and 46 minutes of battery life in our Verge Battery Test, and the machine consistently delivered five to six hours of actual, honest-to-goodness work. My work involves dozens of auto-refreshing browser tabs, multiple push email accounts, and Pandora playing music in the background — not AutoCAD or Adobe Premiere — but compared to the piddling 4.5 hours maximum we got out of last year's model, it's the difference between a laptop we can wholeheartedly recommend and one that needs warning signs plastered on the box. Plus, the XPS 12 boots in a flash and stays as cool and quiet as ever. 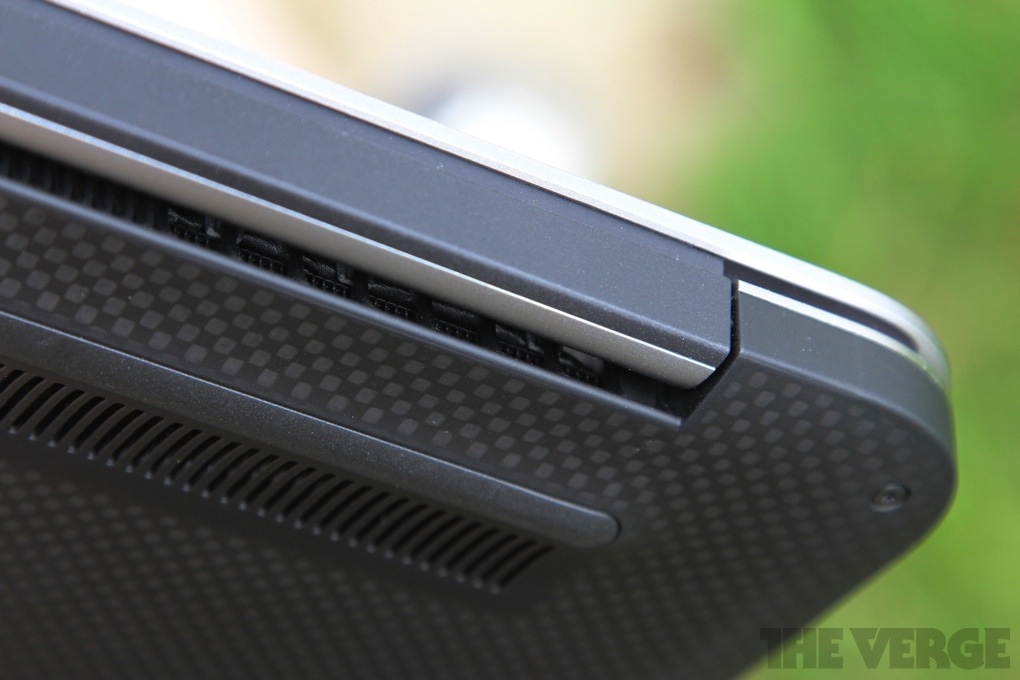 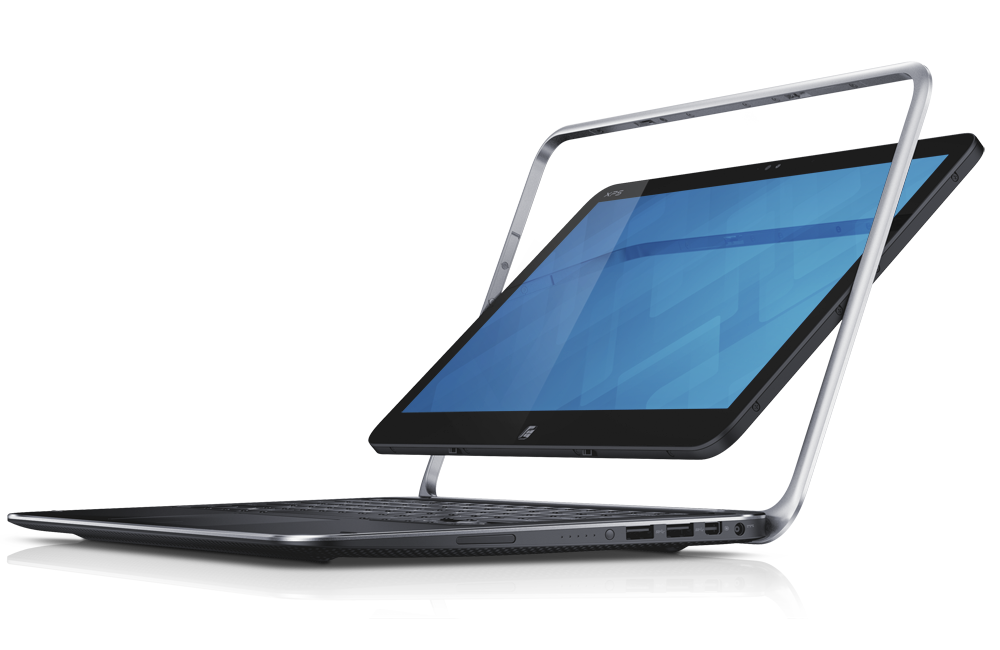 For the past two years, we’ve ended practically every ultrathin laptop review by suggesting that you should probably just buy a MacBook Air. That wasn’t always an option for Windows users, but for those who could, Apple offered an unrivaled experience. Those days are done: we’ve now seen two credible alternatives in a row, laptops which arguably outclass the Air in certain departments.

That said, if you're looking for the ultimate ultraportable laptop, there still isn’t an easy choice ahead of you. The new MacBook Air has insane battery life and a great trackpad, the new Acer Aspire S7 has an incredibly gorgeous design and a price to match, and the new Dell XPS 12 adds great speakers and a great keyboard to an attractive machine that doubles as a (hefty) tablet. If you're not automatically attracted to Mac OS X or one of the two Windows laptop designs, you might end up picking based on price: while a 13-inch MacBook Air starts at $1,099, an entry-level XPS 12 costs $1,199, and you'll pay $1,399 for an Aspire S7 with the latest battery-saving processors and a little more memory to start.

Perfection remains elusive, and Windows laptop manufacturers really need to figure out how to build a trackpad once and for all. We’re looking forward to seeing if the Haswell-equipped version of Lenovo’s IdeaPad Yoga turns out to be an even better machine, but you don’t need to wait to find out. There are three great portable laptops you can buy today, and two of them run Windows. One of them is the XPS 12.