Skype is starting 2014 with a security issue of its own. It appears the official Skype Twitter account has been compromised by the Syrian Electronic Army. The hacking group has taken over the account today, posting several tweets in what appears to be a classic case of phishing. The most recent fake tweet advises Skype’s 3 million followers to avoid Microsoft’s email services. "Don't use Microsoft emails (hotmail,outlook), they are monitoring your accounts and selling the data to the governments. More details soon #SEA."

The tweet in question has been retweeted more than 8,000 times, and has remained online and accessible for more than two hours. Another tweet posted earlier today, which has since been deleted, said "stop spying on people," in a message clearly related to recent NSA accusations. Syrian Electronic Army hackers also compromised Skype’s Facebook page and a company blog hosted at Skype’s website. Both issues have since been rectified, and it appears they're also related to account phishing rather than any wider security compromise of Skype's service. While previous high-profile Twitter account compromises have been dealt with swiftly, this particularly embarrassing breach comes on New Year’s Day, at a time when managers of the account are likely on vacation. We’ve reached out to Microsoft for comment on the Twitter hack, and we’ll update you accordingly.

Update: Skype has deleted the tweet after more than two hours.

Update 2: “We recently became aware of a targeted cyber attack that led to access to Skype’s social media properties, but these credentials were quickly reset," says a Skype spokesperson. "No user information was compromised." 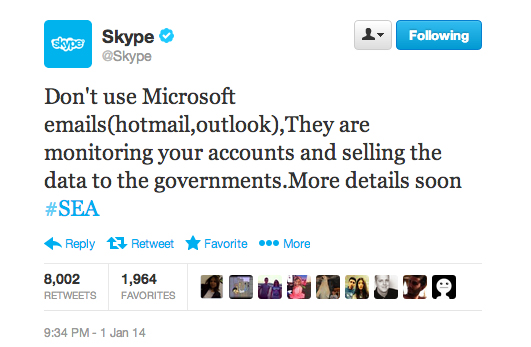