Automakers want to see through walls in the name of safety

Automakers want to see through walls in the name of safety

Your next car could talk to the cars around it

The cars we found parked on a closed course across the street from the Las Vegas Convention Center this week can't actually see through walls, but they come pretty close: Ford is here at CES demonstrating Vehicle-to-Vehicle Communication (V2V), a promising technology under development that could have a significant impact on road safety.

V2V has been in development for a number of years, using 802.11p — a simplified form of Wi-Fi geared specifically at the automotive industry — to beam bite-sized pieces of information between nearby cars. The specific mode that Ford is demonstrating is known as "Where I Am," which simply broadcasts your car's position, direction, speed, and other bits of situational information ten times per second to any other car close enough to listen.

Why would you want to do that? It paints a complete picture of the traffic around you, which can help you avoid a crash with cars you wouldn't normally see (or see in time). Ford's series of rather terrifying tests at the show demonstrate some of those scenarios, like a driver running a red light at an intersection — your car can detect that the other driver is approaching the intersection too quickly and sound an alarm. Another example puts a hard braker two cars ahead — you get an alert that a vehicle ahead of you is laying on the brakes even before the driver immediately ahead of you reacts. In other words, V2V sees around cars, blind corners, and walls.

Regulators are deciding now whether to move toward a mandate

If V2V was a slam dunk, it might have been implemented by now, but there are still challenges that need to be solved. Extremely dense traffic (take rush hours in LA, for instance) can over-saturate the system, preventing it from working correctly — there are just too many cars in close proximity broadcasting their position at the same time. Also, the security and privacy concerns around a system like this are more prevalent than ever: a hacker spoofing a "Here I Am" signal could cause real cars on the road to behave erratically. Ford notes that real V2V signals would be "signed" by a trusted authority, not unlike an SSL certificate on the internet, so that cars would know to reject incorrectly signed data. As for privacy, the data is anonymous without any identifying information like a VIN, and — this is important — Ford says that the MAC addresses cycle every five minutes. In other words, you shouldn't be able to identify the source of a signal for more than a few minutes at a time. 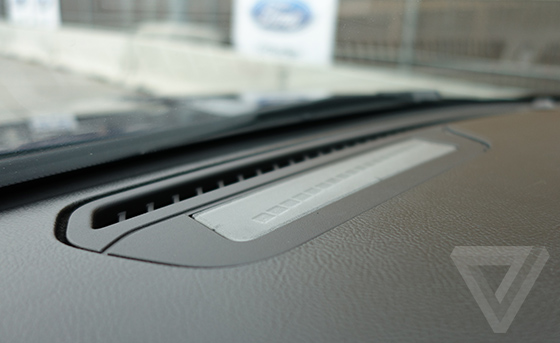 The bar of red LEDs Ford uses to warn the driver of an impending collision in its V2V test vehicles.

That's probably cold comfort for many right after a year where the NSA had been exposed to overcome and undermine effectively every privacy and security measure thrown in its way, but the safety benefits with V2V are very real — the question is whether automakers will be able to convince regulators that it's good enough to standardize. The National Highway Traffic Safety Administration (NHTSA) is expected to rule this month on whether to begin the rulemaking process that could eventually lead to an industry-wide mandate.