Robotic exoskeletons are a staple of sci-fi, pointing to a future where technology can overcome serious injury and bestow superhuman powers on people. But that future is here today for Paul Thacker, who uses an exoskeleton about once a month to stand up and walk around — no small feat, considering he's paralyzed from the chest down.

The 39-year-old Alaska native and snowmobile enthusiast lost the use of his lower body in a training accident in 2010 and was told he’d be confined to a wheelchair, potentially for the rest of his life. But while in physical therapy at a Colorado hospital in 2011, he stumbled across the Esko, a full-body, powered exoskeleton that is the signature product of Ekso Bionics, a Bay Area-robotics company.

"It’s basically a wearable robot," Thacker says after taking a walk in the Ekso this week at CES 2014 to promote the system. Ekso just unveiled its fourth and latest variant — the more adaptable Ekso GT, last month. "It’s just an incredible piece of technology." Thacker controls the suit's mobility through buttons on his crutches, and then sensors and battery-powered joints do the rest. The suit takes about an hour to charge and offers three hours of battery life for walking around and standing upright. And while Thacker can't exactly run in it and uses crutches to maintain his balance, the suit allows his normally motionless legs to propel him anywhere he wants. For Thacker, it's as much a form of mental therapy as it is physical.

Thacker's not the only one to benefit from the life-changing device. Over 2,000 people with varying degrees of lower-body paralysis across the US have suited up in the Ekso and taken a collective 4 million steps, according to the company. About 50 of the devices have been sold to hospitals and rehabilitation centers at a cost of over $100,000 per suit, and Ekso has a backlog of 18 orders that it's in the process of fulfilling. Not bad for a once far-fetched technology that just began taking orders in February of 2012. "We’ve made a commitment to get a million people walking by 2022," says Paul Harding, CEO and co-founder of Ekso Bionics.

"We’ve made a commitment to get a million people walking by 2022."

Ekso was founded in 2005, but the company’s origins actually go back over 20 years. In 1991, when Harding was a graduate student at Berkeley's Human Robotics and Engineering Lab, his professor was building exoskeleton prototypes for the US military (specifically DARPA). Harding wasn't initially convinced of their potential. "I thought they were a little crazy at the time," he says. Instead, after he graduated, he founded a robotics company focused on developing machinery for laying optical fiber. 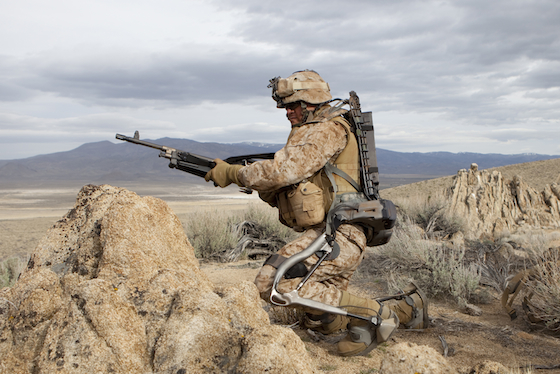 After the market for optical fiber crashed in the early 2000s, Harding reunited with his old professor, who was still designing suits for the military — specifically ones to help soldiers carry more weight. It was during this time that he and his colleagues made the mechanical efficiency breakthrough that would lead to the Ekso by reducing the amount of power needed to operate to the suit from 5,000 watts to just 5 watts for an entire charge. "That was a really big breakthrough," Hading acknowledges. After that, his team began applying for patents to bring the device to market.

After his injury, Thacker was optimistic he would walk again under his own power. He still is to this day. But the reality of his injury is severe – Thacker is a paraplegic. He has what's called an SCI complete, or a severance of the nerves in his spinal cord, which results in no motor ability below his torso. "You don’t really realize the things you take for granted until they’re taken away," Thacker says. He was able to test the Ekso at a hospital in Denver, Colorado, and loved it so much he reached out to the company and volunteered to become one of their reps. The company flies him around to events like CES to demonstrate the technology. "I was like, 'I'll be your crash-test dummy,'" he recalls. Even after his accident, Thacker remains an avid athlete. He's competing in the 2014 Winter X Games in two weeks, as an adaptive snowmobiler.

"Paul, he's kind of a vision of the future, where a complete paraplegic could use an Ekso for part of their daily life," Harding says. He and other Ekso employees point out that the thin field of competing medical exoskeletons – Israeli-based ArgoWalk among them – take longer to suit up than the Ekso. The company’s short-term goal is to move the Ekso from hospitals and therapy centers into peoples' homes. But in order to do that, Esko needs to bring the cost down and increase manufacturing efficiency.

"he's kind of a vision of the future."

Along with that, Ekso Bionics continues developing devices for heavy industry and the military, including one called HULC for the Navy's ship-rehabilitation workers, and one for the Defense Department that Thacker readily compares to science fiction. "We're the first company in the world to get a contract from the TALOS program," he says, "which is the Special Operations Command's effort to get as close as possible to Iron Man."