Meta wants to augment your world with the 'Iron Man' interface

Share All sharing options for: Meta wants to augment your world with the 'Iron Man' interface

When someone tells you they have a pair of augmented reality glasses with an interface designed by the same Hollywood staple who created the Iron Man suit's UI, you listen. Then, you ask if you can put them on.

The glasses come from Meta, a small company with huge dreams that's already comparing itself to tech heavyweights like Apple, even though it doesn't even have a consumer product on the market yet. Its goal is to get our devices from the super-slim state they already exist in down to absolutely nothing: in Meta's vision of the future, our augmented reality glasses project holograms onto the world around us, letting us play with a nonexistent phone in our hand or use a mirror of a computer we have in another room.

"He's literally copy and pasting those ideas into our interface."

By all means, Meta has the names it'll need to start down that road. Wearable computing pioneer Steve Mann signed on as the company's chief scientist, and augmented reality pioneer Steven Feiner is one of its advisors. Perhaps more immediately captivating, it's also hired Jayse Hansen, the designer behind Tony Stark's incredible holographic interfaces in the first and third movies, to create a UI just like the Iron Man suit's for Meta's glasses.

"He's literally copy and pasting those ideas into our interface," Meron Gribetz tells us. Gribetz is the CEO of Meta, where he puts to work the skills he picked up as a self-described Kinect hacker. His first consumer product, the Meta Pro augmented-reality glasses, is getting ready to ship just six months from now, and its descent from the Kinect feels obvious as soon as you see it in use.

The Meta Pro looks like an oversized pair of aviators, but with a few notable additions: a wire dangling from its rear and cameras concealed over the bridge of its nose. That wire connects to Meta's portable Pocket Computer, and it has to stay connected if you want the glasses to run; the glasses' cameras are what allow the Meta Pro to scan the world around it and figure out what its wearer is doing with their hands — not entirely unlike a head-mounted Kinect.

The key difference is that the Meta Pro can project a 3D display right in the center of its wearer's vision. Unlike virtual reality headsets like the Oculus Rift, the Meta Pro still leaves its wearer with all of their peripheral vision — you can even see right through the projected screen if you shift your gaze, as it isn't entirely opaque.

In a demo using a prototype of the Meta Pro, I was able to push virtual buttons and move around virtual objects just by grabbing at the space in front of me with my hands. It worked fairly well for a prototype, though it was often difficult to gauge exactly how far away I was from objects and buttons that I needed to grab or touch. The world wasn't beautiful either — imagine looking into a diorama where the walls are just a black-and-white grid — but Meta says the demo is only meant to showcase the glasses' tracking abilities, and that coding something beautiful is the easy part.

One major piece of Hansen's design made it into the demo: a thin line that shot out from your fingertips toward a target you needed to touch, effectively leading you toward where you need to go. Gribetz says there's a ton more where that came from — Hansen apparently writes a book worth of sketches on every fictional interface he creates just to ensure consistency — but Meta's full Iron Man-inspired UI wasn't live on my prototype device. 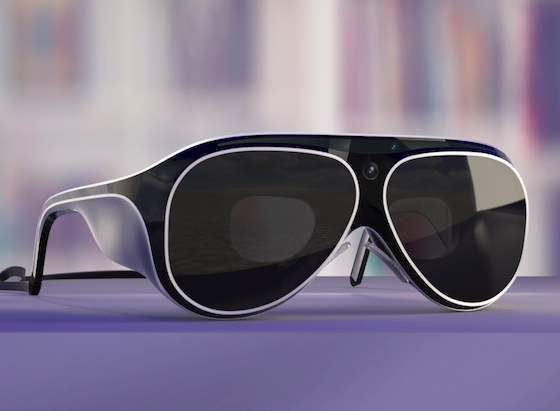 The Meta Pro's shipping model hides its cameras above the nosepiece.

A better idea of the end product is show in Meta's promotional video. The video is said to be shot directly through the glasses and shows it displaying a stylish virtual grid of dots across a desk as a holographic Windows 8 laptop appears; later, its user manipulates rocket parts in a way that Elon Musk must dream of. Altogether, it's every bit as cool as what a usable version of the Iron Man UI should look like.

That's far, far away from what I saw though. Meta wasn't set up to show me much of what its glasses are capable of, though it says that back at its office, it has working demos that can actually project a virtual version of your iPhone straight into your hand. In fact, it's not very clear what the Meta Pro will be able to do out of the box when it starts shipping in July (right now you can preorder it for $3,650, though Meta tells me the ultimate price will be $3,000).

Meta Pro could create the workspace of your dreams

Much of the Meta Pro's use could come from apps. A less expensive version of the glasses is already in developers' hands, and Meta says that it expects some to have apps prepared for its launch. Meta also has plans to make a few of its own apps, including a way to play virtual laser tag, and a virtual Tamagotchi-style pet.

More likely, its main use will be a far less thrilling one: acting as a series of virtual monitors so that programmers can have extra screen space. Right now, Gribetz says the Meta Pro isn't meant to be used outdoors, making its ideal use the creation of the ultimate virtual work environment, be it an office or an artist's loft.

Regardless of what it can actually do at launch, there's clearly a lot of momentum behind the Meta Pro. It hopes to augment your world in a way that the current Google Glass never can — and that's something worth watching out for.