A major protest organized by French taxi drivers turned violent Monday, as demonstrators attacked Uber cars outside Paris' two main airports. As Le Monde reports, the nationwide demonstrations were organized by five major taxi unions, which are protesting the "unfair competition" that Uber and other chauffeur services pose. Kat Borlongan, co-founder of consulting firm Five by Five, was traveling from the Charles de Gaulle airport Monday morning when her Uber car was attacked by protesters. The assailants threw rocks and paint at their van, before smashing a passenger window and slashing one of its tires. Uber confirmed the attack in a statement, and an eyewitness corroborated Borlongan's account to The Verge.

Attackers tried to get in the car but our brave @uber driver maneuvered us to safety, changed the tire on the freeway and got us home.

Renaud Visage, photographer and CTO of Eventbrite, was traveling in the car with Borlongan, and corroborated her reports in a phone interview. Visage says taxis blockaded one of the main highways from the airport, forcing cars to file through a single lane. When their van passed through the checkpoint, "three or four" men on each side started throwing rocks and paint at them, shattering the back window and leaving the passengers with cuts on their hands. At a second blockade, an assailant slashed the back tire, forcing them to pull off the road a few minutes later. 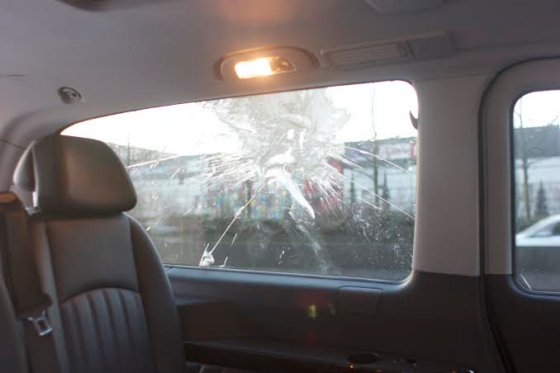 "They also tried to open the doors, but fortunately our driver had locked them," says Visage, who was returning to Paris from a trip to the Philippines. All told, it took them about two hours to reach their destination, leaving Visage in a state of "emotional trauma."

Visage says their van didn't have any Uber signage or logos, though the protesters clearly identified it as a chauffeur service, and were attacking vehicles from other independent operators, as well. He says law enforcement was on hand, though no one intervened to stop the violence.

"The police were there, but they were just watching."

"The police were there, but they were just watching," he says. "They were not actively doing anything."

As many as 5,000 taxi drivers are striking today across several French cities, in protest of new regulations that allow Uber and other smartphone-based cab services to operate in the country. A decree issued in December allowed independent operators to offer their services in France, as long as they wait for at least 15 minutes before picking up a passenger. The provision was intended to appease taxi unions, who describe Uber and similar services as "multinationals," but they're now calling for tighter restrictions, including a minimum 30-minute delay. Uber and other cab-hailing services have faced resistance from taxi groups in the US, as well, forcing regulators to carve out new rules for their use.

Uber, meanwhile, has responded rapidly to today's events. A representative from the company's Paris offices contacted Visage shortly after the attack, and offered to compensate him for the cost of his trip.