PreCheck unchecked: why the TSA is putting more people in the fast lane

PreCheck unchecked: why the TSA is putting more people in the fast lane

Agency says it's trying to speed up airport security lines, but details on its selection process remain murky

You arrive at the airport and the security line is huge. You're nervously glancing at your watch and the snake of people in front of you, when an employee from the Transportation Security Administration (TSA) suddenly pulls you aside. You've been selected for the PreCheck line, which means you won't have to take off your shoes, remove your computer, or sweat through the tedium that normal security lines entail.

You waltz past the checkpoint and arrive at your gate with time to spare, and everything seems great — except for the fact that you've just breezed through a security procedure typically reserved for thoroughly vetted passengers. You never applied for the PreCheck program, never submitted fingerprints or filed paperwork, but for some reason you've been deemed "safe" enough for the express lane.

It's a scenario that many passengers have experienced in recent months, and one that has raised concerns over how the TSA is rolling out PreCheck — an expedited security program that launched more than two years ago and has since expanded to more than 100 US airports with nine partner airlines. Subscribers who submit to a background check, provide fingerprints, undergo an interview, and pay an $85 fee can pass through security with minimal safety checks. They're also allowed to pass through standard metal detectors, rather than the full-body scanners that have drawn so much controversy in recent years.

"This is TSA's biggest secret of all, and it should be."

The idea is to speed up the screening process by moving away from a "one size fits all" approach to airport security, though the program has since expanded to include passengers who haven't been pre-vetted. Last year, the agency began incorporating non-enrolled travelers into PreCheck lines as part of a policy known as "managed inclusion." Under the program, behavior-detection officers — some accompanied by bomb-sniffing dogs — analyze passengers' behavior as they wait in security. If they display no anxiety or other high-risk behaviors, they may be invited to go through the PreCheck line.

TSA administrator John Pistole has defended the program before Congress, arguing that the methods deployed are "scientifically validated," though the agency has revealed few details on the criteria it uses to select passengers — whether from the security line, or during the application process.

"This is TSA's biggest secret of all, and it should be," says Jeff Price, an aviation security expert and professor at the Metropolitan State University of Denver. "Part of the success of the program is to not let people know how they are selected or the criteria." 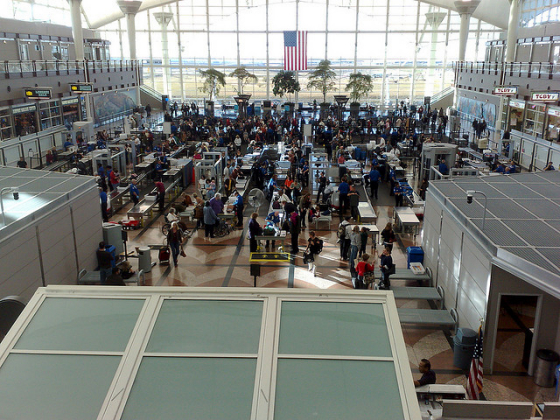 The TSA says it selects some passengers for PreCheck in order to speed up security lines. (Wayan Vota / Flickr)

Doing so, some say, would make it easier for criminals to slip through PreCheck, though privacy groups argue that the TSA should be more transparent about its standards. The PreCheck application program is exempt from some provisions of the federal Privacy Act, in order to protect information that could compromise criminal investigations, but privacy advocates say there should be greater oversight.

"That's a problem because it can be quite subjective," says Khaliah Barnes, administrative law counsel at the Electronic Privacy Information Center (EPIC). "It's not exactly clear how the TSA is leveraging all the information that is amassed to make determinations about individuals."

EPIC has urged Congress to implement stronger oversight and privacy protection over the PreCheck database, pointing to factual inaccuracies and the sensitive information that the database contains — information like fingerprints, social security numbers, and birth certificates. The TSA has dismissed allegations that PreCheck invades passenger privacy, noting that the program remains voluntary, and has said that it does not tolerate ethnic or racial profiling. Yet EPIC fears that citizens won't have legal recourse to challenge the TSA's decisions if the agency's database remains sealed, and lawmakers have so far been reluctant to take action.

"The underlying premise of PreCheck, I think, is wrong."

There are also doubts over whether the TSA's behavior-detection methods are even effective at identifying potential threats. A November report from the nonpartisan Government Accountability Office (GAO) found that behavior-detection techniques work only "slightly better than chance", and that they may be applied on inconsistent or subjective bases. The report was especially discouraging considering that the TSA has spent an estimated $1 billion on implementing behavior-detection protocols since launching the program in 2007. The TSA later contested the report's findings, saying they were based on a survey of academic studies focused on identifying liars, rather than the suspicious behaviors that its agents are looking for.

Jim Harper, director of information policy studies at the Cato Institute, says it's equally futile to sift through mountains of personal information in the hopes of uncovering potential terrorists. Recent attacks, he notes, have been executed or attempted by "lone wolves," such as the suspected Boston Marathon bombers and Umar Farouk Abdulmutallab, who tried to smuggle a bomb onto a plane in 2009.

"The underlying premise of PreCheck, I think, is wrong," Harper says. "That is the idea that you can go looking through a person's biography and figure out whether they're a threat or not."

"I don't think the government should be in a position of segregating society."

Yet Harper and security experts see value in PreCheck's unpredictability. TSA agents select passengers to pass through PreCheck at irregular times and locations, usually depending on queue length, and some eligible travelers are randomly selected prior to going through security. That makes it harder for would-be terrorists to exploit the system, but Harper still has reservations about a two-tiered approach to airport security. As the program expands, he argues, it's not hard to imagine a situation where affluent passengers whisk through PreCheck, while poorer or less experienced travelers remain trapped in longer lines.

For the moment, however, the TSA has shown no signs of scaling back or reforming the PreCheck program. Since its launch in October, 2011, more than 30 million people have used the expedited service, and the agency plans to expand it to more airports over the coming year. The response from randomly selected travelers has been largely positive, as well, though there have been some growing pains.

"The problem now is that some frequent flyers are selecting the normal line because the PreChecks line are backed up with people who don't understand the process," says Price. "I think this is going to hurt the program in terms of enrollment, but we'll see what happens in the long-term."