In December of 1989 Roger Ebert ended his review of Nintendo-produced Fred Savage film The Wizard thusly:

The studio may have targeted kids who are Nintendo fans. But here the problem is that the movie doesn’t have much Nintendo in it, and some of that is wrong (when it’s announced, for example, that the third level of Teenage Mutant Ninja Turtles has been reached, the movie screen clearly shows the first level). “The Wizard” is finally just a cynical exploitation film with a lot of commercial plugs in it…it will disappoint just about everybody and serve them right for going in the first place.

If Ebert had spent a fraction of the time he did investigating TMNT pagination errors researching the average American kid below “the age of reason” a quarter-century ago he would likely have found that the underage, NES-worshipping public couldn’t have smelled a continuity error if it sat on our peach-fuzzed upper lips during The Wizard. We were too busy picking our jaws up off the floor as feather-haired antagonist Lucas Barton lifted the first-ever mass-marketed virtual reality device out of a military-grade aluminum case:

“I love the Power Glove,” the prepubescent megalomaniac cooed softly, flexing his digits with a satisfying latex crinkle. “It’s so bad.” I never wanted to simultaneously kill someone and be somebody so bad in my entire life.

And he was right: the Mattel-designed, Nintendo-licensed controller was Michael Jackson Bad.

NO GLOVE, NO LOVE 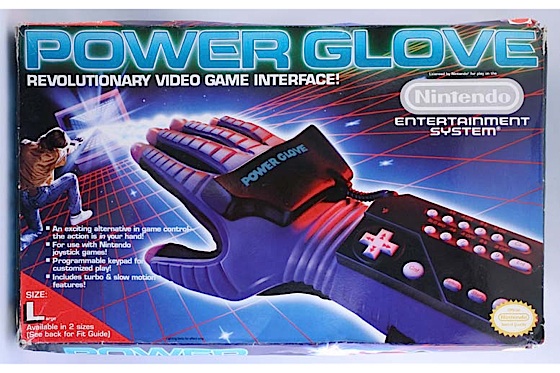 For a kids’ product, the Power Glove had quite an impressive pedigree. The engineer Thomas Zimmermann had worked with virtual reality pioneer Jaron Lanier to develop its predecessor, a robotic surgery-oriented wearable called the DataGlove that provided 256-point resolution to measure flexion of each finger, as well as the ability to detect the yaw, pitch, and roll of the entire hand. To get the MSRP down to $99 when it hit shelves in the summer of 1990, Mattel ditched all but 2 bits of digital (get it???) resolution and two dimensions of rotational analysis. This meant the Power Glove could only detect rough “trigger-pull” finger movements for button-presses and single-plane wrist-rolling for D-pad emulation. It worked in tandem with a set of three ultrasonic sensors — much like the Wii sensor bar, the onerous Velcro-on-TV-mounted setup signaled that the resident gamers took their screen time seriously, even when the screen was dark.

From a design perspective, there is simply nothing that comes close to the 1990-ness of the Power Glove. In 2013 we often look for ways to integrate tech seamlessly into our lives; back then, it was all conspicuous futurism — nothing said “I’m probably a robot” better than strapping a molded-plastic-and-spandex game controller onto your primary appendage. NES-style controls (accompanied by a peculiar numpad) rested permanently on the forearm, connected to dual ultrasonic transmitters on the knuckles by an overly complicated conduit. An extra-long cable plugged right into the port of your Nintendo, which was the closest you could feasibly come to shaking hands with Mario himself.

The box art is vaguely reminiscent of Tron’s game grid on a stormy night. The massive bolt of lightning shooting from those fingertips over neon ray tracing became an unforgettable allegory for the unbridled power that was presumably bestowed on the user upon donning the Glove; last year’s ‘90s-drenched AAA title Far Cry: Blood Dragon steals unflinchingly from Mattel’s vintage design template.

And as if Lucas Barton wasn’t a bad enough evangelist in his own right, he had a legion of sunglasses-at-night lookalikes spreading the gospel in print and on TV. 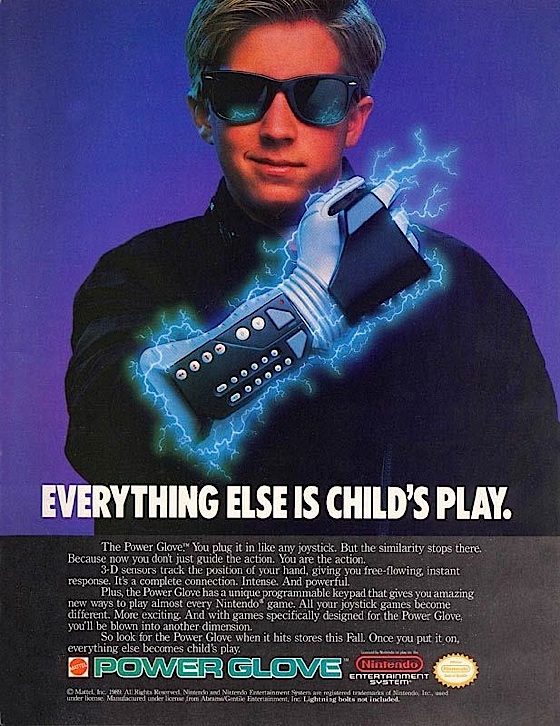 This was the rhetoric of technology in the early ‘90s, long before iMinimalism steamrolled popular maximalism. We will not just make your life better. We will transform your brief, miserable shitstain of an existence into something worth living… for just under a hundred bucks.

So… yeah. I forced my daddy to buy me one. I wore sunglasses into Toys “R” Us — I was on a mission for digital / intergalactic self-empowerment funded by the First National Bank of Dad. For the duration of the car ride home I felt like I was really part of something, like I had instantly evolved into a member of an exclusive club whose primary activities were kicking futuristic ass, being cooler than all my friends, and french kissing girls with my lightning tongue whenever I wanted.

And then I tried to play the first level of Rad Racer with just one hand.

Controlling sprites with a virtual-reality glove turned out to be far less intuitive than Lucas made it seem during his brief onscreen demo in The Wizard. There were only two (bad) games that actually exploited the finger-sensing potential, Super Glove Ball and Bad Street Brawler. To use the Power Glove with any other title you had to enter in a special code on that awkward numpad to “program” the glove for use with the game. For a brief moment it did feel powerful to direct car movement by rotating my wrist, and to control acceleration by curling a finger… but it was a far cry from the precision of using the stock NES controller. It was also way too easy for the TV-mounted sensors to get out of spatial sync with the Glove, requiring constant resetting of the unit via the on-dash “center” button.

After only a short time in-glove it became apparent that this premium slice of the future wasn’t going to turn me into a cyberwarrior — in fact, if you were at all serious about gaming, the Power Glove was ushered back into its lasery box almost as hastily as it had been rushed into the living room. It was a good thing I was wearing sunglasses when that happened, or the whole world would have seen the bitter tears of disappointment welling up in my spoiled little eyes. 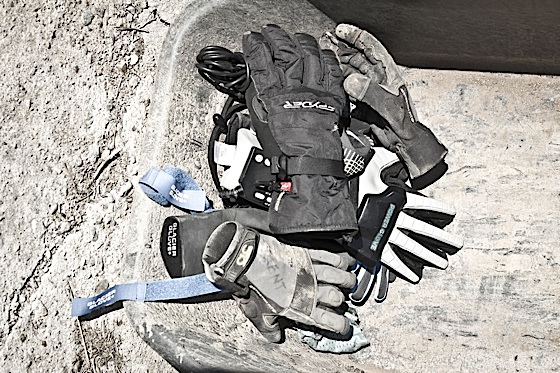 I would love to report that my experience with the Power Glove humbled me; that I became a wiser and more media-savvy eight-year-old. Instead, my obsession with video game peripherals metastasized, leading to a lifetime of gimmicky lust defined by the Sega CDs, Neo Geos, and Virtual Boys of the world.

Roger Ebert, it turned out, had been right as usual

Roger Ebert, it turned out, had been right as usual. The Japanese puppeteers behind Fred Savage and Jenny Lewis had taken me for a ride, had exploited my fandom for long-term corporate sustainability. But that’s what makes the world go ‘round, right? No matter how pathetic the Power Glove might have been, it grabbed onto a part of the popular conscious that binds early-'90s gamers around the world together for eternity, and I wouldn’t wanna live in a world where that shitty version of virtual reality never existed.

Thanks to GamerDoc in Pasadena for the loaner glove.