A new DNA supercomputer is promising to deliver radically cheaper genome sequencing, a shift that could spur research and broader adoption of the tests. Illumina's latest model is designed to process 20,000 samples a year, with costs potentially as low as $1,000, a milestone the genetics industry has long sought to break. Unlike consumer-grade DNA tests like 23andMe and GeneLink, Illumina's test will sequence every single base pair in a person's DNA, scanning huge quantities of genetic data that are not currently understood.

Cheaper sequencing is seen as particularly important since each additional test provides geneticists with more data to study, especially for the huge swaths of genome that have no clearly understood purpose. More research allows doctors to infer more from the data, making each subsequent test more valuable. The movement for cheaper sequencing has also seen enormous success, as costs have plummeted since 2007. Over the following five years, the cost of a full genome dropped from roughly $10 million to only $10,000, as illustrated by the NIH chart below. Illumina's previous model, released last year, performed sequencing for as little as $3,000. 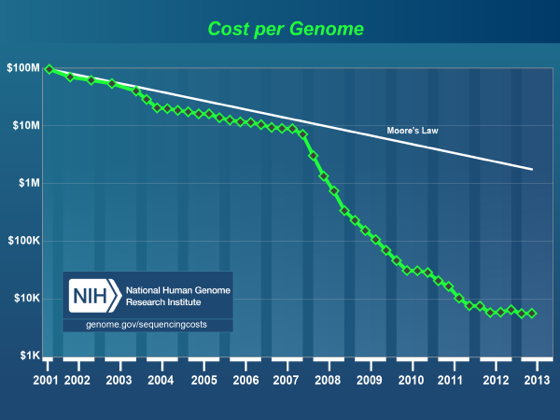