A smart fork in search of a health movement

I’m a fast eater. I’ve tried to become one of those people that takes more than ten seconds to eat a slice of pizza, but I’m still usually done before my friends have even made a dent. I need to slow down, though, and not just for my own peace of mind. A 2010 study published in The Journal of Clinical Endocrinology & Metabolism found that people who were given identical meals released more hormones that made them feel full when they ate the meal in 30 minutes rather than five. That was enough to make me at least want to try to slow down, and maybe appreciate one or two of my daily meals.

But it’s annoying to be so conscious of how you eat all the time. There are gadgets that passively monitor everything that happens when you exercise, but there aren’t many that do the same with food. Apps like MyFitnessPal and LoseIt! rule dieting, but tracking everything you eat is just as much a burden as it is a perk. Unlike fitness tracking, which the FitBit Force and other devices do passively, inputting food data isn’t mindless enough to be convenient or enjoyable.

The Hapifork, the surprise darling of CES 2013, promises a quick and intelligent way to help you eat more slowly. (It also says it will help you “eat healthier,” “lose weight,” and “cut calories.”) The fork passively monitors how fast you eat, vibrating and lighting up to let you know when you take too many bites too quickly. It claims to be the answer to all your bad eating habits, with one simple tweak.

The device looks more or less like a regular fork, but its base is wider, almost like an electric toothbrush. It’s weird to use such a big fork at first, but it’s not so large that you can’t get used to it. At the bottom of the base are two lights: a small bar that indicates how charged the battery is, and a circular indicator of your eating speed. In addition to vibrating every time you take a bite too quickly, the circular light will turn red. If you’re eating at a good speed, which means waiting 10 seconds between each bite, the light glows green.

Before using the Hapifork for the first time, you have to do a few things: connect the fork to your computer via its Micro USB port, install the software on your desktop, and leave it connected to charge for about four hours — that gives it about a week’s worth of power. While it charges, you create your profile and set the preferences on the Hapifork’s web dashboard.

Here’s where things get tricky. You tell Hapifork how you eat in one of three ways: piercing food with the fork at nearly a 90-degree angle (the Picker), scooping food onto the fork (the Scooper), or a mix of the two (the Data Lover). In a perfect world, the Data Lover setting would be the best for someone like me who has no idea how they eat, but it falls dramatically short. It only works with a non-conductive knife, which won’t interfere with the fork’s sensitive prongs — they use capacitive sensors to detect when the fork touches your mouth. Data Lover was way too sensitive, vibrating incessantly as I used it, mistaking accidental knife and plate taps for my next bite. Sometimes I would just shift the fork in my hand and it would vibrate angrily at me. It’s a weird feeling, being angry at a fork.

I had to stab food from a perfect 90-degree angle

I chose Picker mode instead, but initially didn’t get very far. Using its motion sensors, Hapifork can tell how you’re moving your fork, and the capacitive sensors register a bite when the prongs touch your mouth. At first, I apparently wasn’t moving the fork exactly right for the Picker’s setting, so it missed many of my bites. Once I exaggerated my movements a bit — stabbing food from a perfect 90-degree angle — Hapifork started to come to life. Eventually, eating the proper way becomes less cartoonish and more routine, without feeling forced. All it took was the initial understanding of how you’re supposed to move the fork during each bite to get the hang of it.

Yet even in my preferred mode, Hapifork did lag sometimes, missing some of my bites or overzealously counting a sudden fork movement around my plate as my next bite. Thankfully only the handle of the fork vibrates, so my teeth didn’t rattle when I (or it) made a mistake. At medium intensity, the vibrations were enough to make me notice, but not so much to bother me. You can turn off both the vibrations and the light indicator and monitor your eating with no interruptions, though this somewhat defeats the purpose: the Hapifork is essentially your mother constantly telling you to slow down. Still, you do have the option to eat first and face your data later.

After a few meals, I was surprised to find myself being more thoughtful with my eating, placing my fork down between bites. It didn’t always stop me from wolfing down dinner after a long day at work, though â I was hungry. When my hunger outweighed my concern for my eating speed, I ignored the Hapifork’s vibrations and its disapproving red light.

Why do health apps always follow the cutesy green-blue-orange cliché?

After your meal comes the most annoying part of the entire process: plugging your fork into your computer and syncing the data. It’s a simple task that you shouldn’t have to do after every meal, and most of the time I waited until the end of the day. The other possible way to sync your data is through the Hapifork mobile app — you connect your fork to your phone via Bluetooth, and it will track and sync your data as you eat. It’s great, when it works — the HAPI Lite app would see my Hapifork as a Bluetooth device it could connect to, but wouldn’t let me pair it up at first. Even when I did manage to pair it, the app would disconnect from the fork randomly, forcing me to turn it off and back on again in the middle of a meal.

What’s noticeably absent from the data is what you’re actually eating. Sure, there’s a place for you to upload a photo of your meal, but there’s no nutritional breakdown. You could be shoveling forkfuls of broccoli or bacon and Hapifork would still only care about how fast you’re doing it. And forget about the foods you don’t eat with a fork — anything that can’t be stabbed with those little prongs simply doesn’t exist. Hapifork wants to make you better at eating, not change what you eat. It’s banking on the idea that eating slowly will lead to satiation — but eating slowly and feeling full do not equate to healthy eating.

And just because you feel satisfied doesn’t mean you won’t eat more food. A 2011 study in The Journal of Nutrition looked at a group of people eating a leisurely two-hour meal and a group eating a 30-minute meal. While those who ate more slowly felt fuller longer, both groups consumed similar numbers of calories when tempted with junk food after the meal. It truly boils down to self control and the benefits of eating slowly for your body. Since I eat fairly healthily most of the time, I didn’t feel like I was gaining anything from eating slowly, and I certainly wasn’t gaining enough to bring Hapifork around with me to eat socially. If I want to watch my eating when I’m out, I’ll be that girl who orders a salad rather than the girl who brings her own fork to a restaurant. 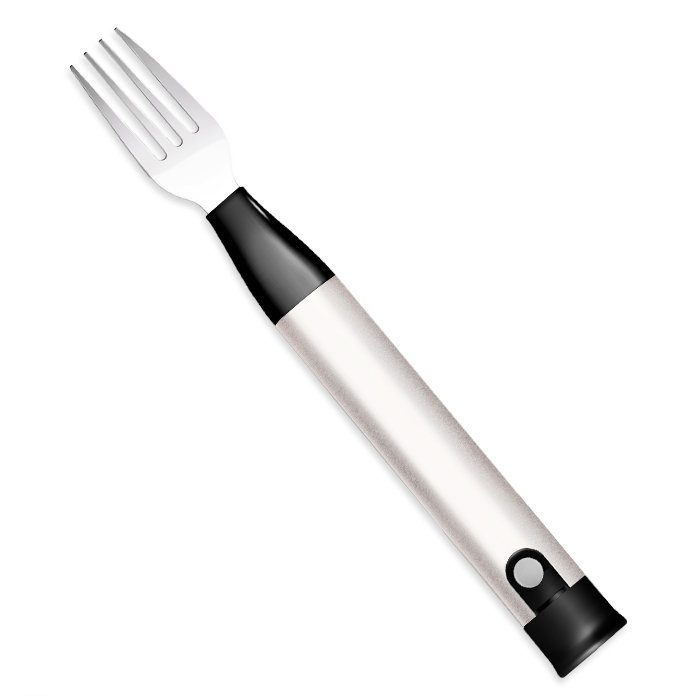 Monitoring your diet should't be an arduous task, but it still is.

As much as I wanted to like Hapifork, it promises too much and delivers too little. Ultimately it’s a utensil that will slow you down and make you more aware of how fast you were eating; if you're content spending $99 on a product that does that and only that, the Hapifork is mostly great. But I’m still skeptical that carrying a strange fork around will revolutionize my health. It is a shame that health trackers have to be sold on the idea that they will instantly help users lose weight! cut calories! and be superhuman! because the Hapifork does the one thing it was made to do and does it well — however boring or simple that action may be. It just won't help you lose ten pounds in a week or skip that second slice of cake after dinner.

But by tracking speed well, Hapifork is on the cusp of doing something bigger: proving that monitoring your diet doesn't have to be an arduous task. What would have taken the Hapifork to the next level would have been meal tracking or nutrition calculation without needing to input any information. A product that can do that and track how fast you’re eating would blow all others out of the water, because what and how much you eat means just as much to your body, if not more, than how quickly you eat it. Speed is only one factor of healthy eating, but if it can be conquered with passive tracking, that means other factors like calories and quantities can be too. Someday.