Inside California's $25 billion plot to save its water supply

Inside California's $25 billion plot to save its water supply

The state's key estuary is in serious jeopardy, but can a bold new plan solve the problem?

Behind many of the shiny fruits and vegetables in the produce aisle, there's a decidedly ominous backstory: California, supplier of much of our domestic produce, is just one earthquake away from drying up.

The problem is that most of the state's agricultural water, as well as drinking water for large parts of Silicon Valley, Los Angeles, San Diego, and other major metropolitan areas, comes from a vast estuary northeast of the San Francisco Bay. It's an estuary that's about to collapse. The Sacramento-San Joaquin River Delta, or more simply, the Delta, relies on old levees that will crumble in an earthquake or buckle under pressure from rising sea levels, say experts, and in fact already do crumble on a regular basis. A large-scale collapse would put the state's water supplies in grave jeopardy, and in turn impact the entire country, which relies on California both economically and for a large amount of its food.

A controversial new plan, developed by California's Governor Jerry Brown in conjunction with various state agencies, offers a potential solution. Dubbed the Bay Delta Conservation Plan (BDCP), it suggests boring two massive tunnels to subvert the levees entirely, while simultaneously attempting to help endangered species through large-scale habitat restoration. Critics of the plan say it throws small Delta family farms under the bus by cutting off their freshwater supply, and, in fact, further imperils the estuary's tottering ecosystem in order to satisfy the needs of big ag in the Central Valley. But supporters say it's the best solution to a problem that, if not addressed, could severely impact the state's $1.8 trillion-economy and leave up to 25 million people in the state without drinking water. What both sides agree on is that something must be done before it's too late. 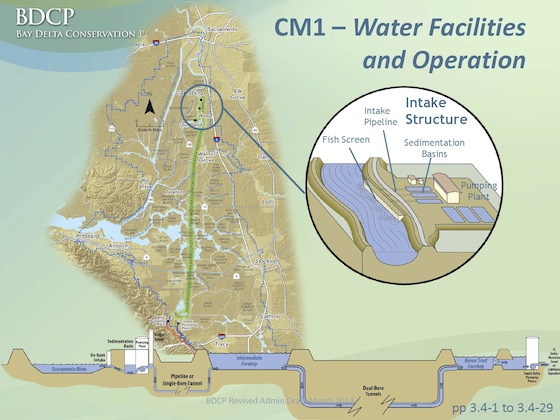 A diagram of how the BDCP would transform California's water infrastructure. The proposed tunnels are shown in green. (Bay Delta Conservation Plan)

Once upon a time, the Delta was a big, impassable tidal marsh. It was fed on one end by ocean water, via the San Francisco Bay, and on the other by the confluence of the state's two largest rivers, the Sacramento and the San Joaquin. Chinook salmon ran along its waterways, and the area was rich in native species that flourished in its unique saltwater–freshwater habitat.

When gold was discovered in the Sierras in 1849, new settlers dredged much of the Delta to make farmland to feed the miners. Chinese immigrants, who had moved in to build the Transcontinental Railroad, constructed levees to confine the water to a maze of canals that still exists today.

Reachable only by small highways, the Delta, which extends from about an hour northeast of San Francisco all the way to Sacramento, has a sleepy, run-down, stuck-in-time feel. Agricultural land gives way to hundreds of miles of murky channels and small islands that are underwater at high tide, covered in wavering tule reeds. It's referred to by some as the "Redneck Riviera", popular with water-skiers and bass fishermen, and lacking in any of the Bay Area's bourgeois trappings. In the handful of tiny towns along its banks, you won't find Starbucks or cute bed and breakfasts. There is, however, a spam festival, a crawdad festival, and a meth problem.

Currently, water flows through canals in the Delta before it's diverted to Silicon Valley, the Central Valley, Los Angeles, and the surrounding areas via pumps at the southern end of the Delta. The BDCP would instead siphon off a majority of the estuary's freshwater supply earlier — directly out of the Sacramento River and at the northern end of the Delta — then run that water underground for some 35 miles in twin 40-foot diameter tunnels. From there, the water would enter holding reservoirs, then be pumped out towards central and southern California. The estimated cost of the BDCP is $25 billion, which will supposedly be covered by the residential and agricultural customers who'd consume the water.

"The great fear is if for whatever reason, flooding or earthquake, you get multiple islands that flood in the central Delta from levee collapse, and that creates a sucking in of salt water from the bay," says Nancy Vogel, director of public affairs for the California Department of Water Resources. This would be bad, because it would mean the water would be contaminated by salt, and the pumps would have to be shut down. "If you have a system that takes water from the Sacramento River and North Delta and it's underground and seismically safe, you don't risk the disruption."

"This would be bad."

There are 300 species of wildlife in the Delta, 29 of which are threatened or endangered. The plan makes additional provisions for 145,000 acres of habitat protection and restoration, and construction of new fish screens that will keep salmon and smelt and other creatures from being sucked into the intakes and reservoirs the way they currently are. It includes reconnecting floodplains and rivers, and restoring riverbanks to a more natural state.

Not surprisingly, however, locals aren't exactly embracing the idea of 90 percent of the Delta's freshwater supplies being siphoned off. Seven members of Congress representing Delta districts oppose the plan, as does much of the local farming community, which stands to lose the most. Although not as big and productive as the Central Valley region, Delta farmers supply significant amounts of certain crops such as wine grapes and asparagus. Opponents have protested Brown's plan — "Stop the Tunnels" has become their rallying cry.

"It's a horrible concept — absolutely horrible," says Tim Neuharth, a Delta farmer whose ancestors have been growing in the area since the Gold Rush. "If the Delta's already in a bad way, I don't see how taking more water out of the system before it even gets to the Delta is going to improve the health of the Delta."

"It's a horrible concept — absolutely horrible."

Proponents say the plan is better than the current water system, which artificially maintains a high proportion of freshwater in the estuary, compared to what it was, say, 100 years ago. Although that freshwater is better for Delta farms, salmon and smelt populations have suffered and are now at historic lows. "The way we pull the water through the Delta now is really bad for the ecosystem — it's really unnatural," says Ellen Hanak, a senior fellow at the Public Policy Institute of California, a non-partisan think-tank that has studied Delta water policies. "We do that to maintain a much more stable water quality in the Delta than you would if it was more naturally flowing."

Despite ongoing controversy over the BDCP, this plan is only the latest in a series of ideas to better extract water from the Delta. Most recently, a plan to build what was known as the Peripheral Canal, literally a long canal that syphoned off freshwater from the Delta and circumvented the troubled region, was defeated by voters in 1982.

"If you can just build a big enough project, you can solve it."

"Tunneling technology over the last 10 years has really taken off," says Gordon Enas, principal engineer for the California Department of Water Resources. "Several years ago, when we first embarked on this project, we hadn't really considered it."

The BDCP, which runs over 40,000 pages, has been released to the public for comment until April. If the plan goes into effect as is, it'll take an estimated 50 years to implement — not that such a lengthy process is thwarting Californians backing the project. "There is an obsession that Americans in general and California in particular have about technological solutions," says Matthew Booker, an associate professor of history at North Carolina State University who's written a book on the Delta. He cites Elon Musk's Hyperloop project, which would transport riders from San Francisco to LA in 30 minutes via pneumatic tube, as just one example. "Here is this unbelievable, maybe unsolvable, problem of the Delta. And if you can just build a big enough project, you can solve it."