A smartwatch veteran seeks to re-engineer the pre-order

Share All sharing options for: Can Prelaunch recreate Kickstarter's vibe for bigger companies?

Best known for making printers and other staid office equipment, Epson is this year entering a new field of consumer electronics with the introduction of its Pulsense fitness trackers. Joining the horde of wearable tech purveyors at CES, the Japanese company debuted the $199 Watch and $129 Band, and — in another break with tradition — directed anyone interested in pre-ordering them to a new web service called Prelaunch. The brainchild of former Fossil Tech VP Donald Brewer, Prelaunch wants to apply the winning formula that’s made Kickstarter such a success to the pre-order process employed by established brands.

The popularity of Kickstarter and other crowdfunding websites is built on a sense of authentic human interaction between the buyer and seller. While its core function is to facilitate commercial transactions, Kickstarter dresses that activity up in a language of "backers" and "pledges" and enhances it with intimate information about each project and personalized incentives for larger contributions. Backers spend money on both the project itself and on the experience of funding it. The unpredictability of whether a proposed product will get funded is part of the overall appeal.

Contrast that with the typical pre-order page from a big company — clinical and impersonal, substituting tanned models for real users — and you begin to see the chasm of difference between the way people enjoy spending their money online and the way most brands expect them to. That’s the space Brewer’s Prelaunch wants to occupy.

At the moment, says the Prelaunch CEO, "Companies tend to have two separate streams: one is the store where transactions are handled, the other is the Facebook page where they actually socialize." His idea is to meld the two, turning the landing page for a new product into an informative and interactive early adopter experience. Buying something from Prelaunch will get you access to production milestones, behind-the-scenes insights, and sometimes even the opportunity to test out gadgets ahead of release.

If that all sounds terribly ambitious, that’s because it is. Donald Brewer has a storied résumé, having developed Microsoft’s SPOT smartwatch and founded the Phosphor E Ink watch brand, but his name recognition alone won’t be enough to attract companies to join Prelaunch. As if to illustrate the point, his first and biggest client, Epson, is a firm he’s already worked and consulted for in years past — how does Prelaunch hope to get the rest of the tech industry on board?

For a company like Epson, whose biggest challenge is to swap its unexciting image for a more personable one, outsourcing the pre-order process to Prelaunch is a calculated risk. It eats into the company’s eventual proceeds, but it also gives it a chance to redefine its brand and identity in consumers’ minds. Assuming Prelaunch takes off, one of its additional strengths would be its centrality and ability to act as a hub for discovering cool new tech products coming up for release. 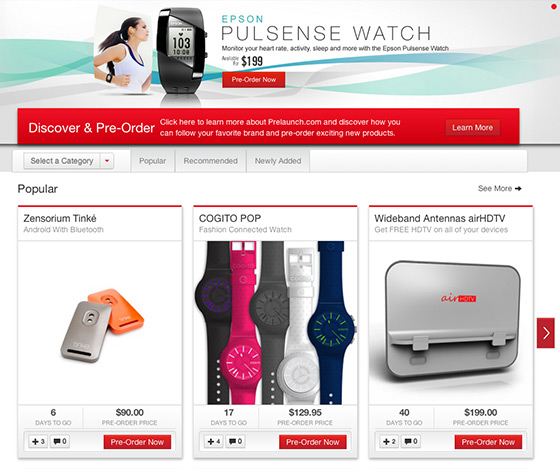 Discussion forums will be at the core of Prelaunch's social ambitions

You’re certainly more likely to find and consider buying the Pulsense Watch at a gadget compendium like Prelaunch than you would be while browsing Epson’s projector portfolio. Brewer hopes to amplify this effect through a series of partnerships with hardware discussion forums as well as the creation of a forum on the Prelaunch site itself. To that end, he’s working with AVS Forum founder David Bott to build out the networking side of the business.

Added product exposure and the humanizing effect of speaking directly to consumers are the two big selling points that Prelaunch has for electronics makers looking to sell their gear online. Of course, the big players like Sony and Samsung are capable of recreating those beneficial effects themselves, but smaller outfits like Scosche, AfterShockz, and Cogito stand to gain from uniting around a central gadget pre-sale hub. Prelaunch counts them among its early participants and will charge each of them between 15 and 20 percent of the final transaction price for any sales they make through the website. As part of the service, Prelaunch will also provide them with detailed analytics, A/B testing to perfect the right marketing message, and even order fulfilment should they lack the infrastructure to process orders themselves.

While still in beta today, Prelaunch presents an intriguing model for the multitude of small tech companies occupying the space between homebrewed amateur productions and CES-headlining juggernauts. Some of them, like Modular Robotics, already set up shop on Kickstarter in spite of not needing the funding to ship their product — they’re there purely to collect pre-orders and generate buzz. Whether you believe Donald Brewer when he says he can fill that void or not, the business need is evidently there. As for consumers, Prelaunch aspires to give them another avenue for sating their appetite for early access to the latest gadgets, while also making the producers more relatable. Much like a Kickstarter project itself, Prelaunch appears more hopeful than pragmatic, but if it finds enough support, perhaps it too could surprise and move into the mainstream.