The chocolate in the candy aisle could soon begin to look a lot weirder. 3D Systems announced today that it will partner with the Hershey Company to develop "innovative opportunities" in 3D-printed food. The multi-year agreement will have 3D Systems working with Hershey to come up with new ways of delivering 3D-printed food to consumers.

Hershey is the first big food company to jump on the 3D-printed confection bandwagon, and 3D Systems gains a lot from it. The company will get its products like the ChefJet into the hands of the largest producer of chocolate in North America, which can easily shell out the money to pay for the machines and invest in developing and testing different kinds of 3D-printed food. As far as Hershey goes, the spoils will come over time. If the partnership produces something desirable to consumers, Hershey could gain name recognition as the first 3D-printing confectioner giant.

Could 3D-printed Hershey Kisses be just as good as regular ones?

We've seen other kinds of 3D-printed chocolate in the past. MIT Media Lab's David Carr created the peculiar "Eat Your Face Machine" back in 2011, which uses a computer to take a model of a person's face and then carves that face in a block of chocolate. Instead of becoming a universal hit, it ended up teaching Carr more about the social implications of eating a 3D model of a person's face — as it turns out, people weren't too thrilled about it, even if it was made out of chocolate. 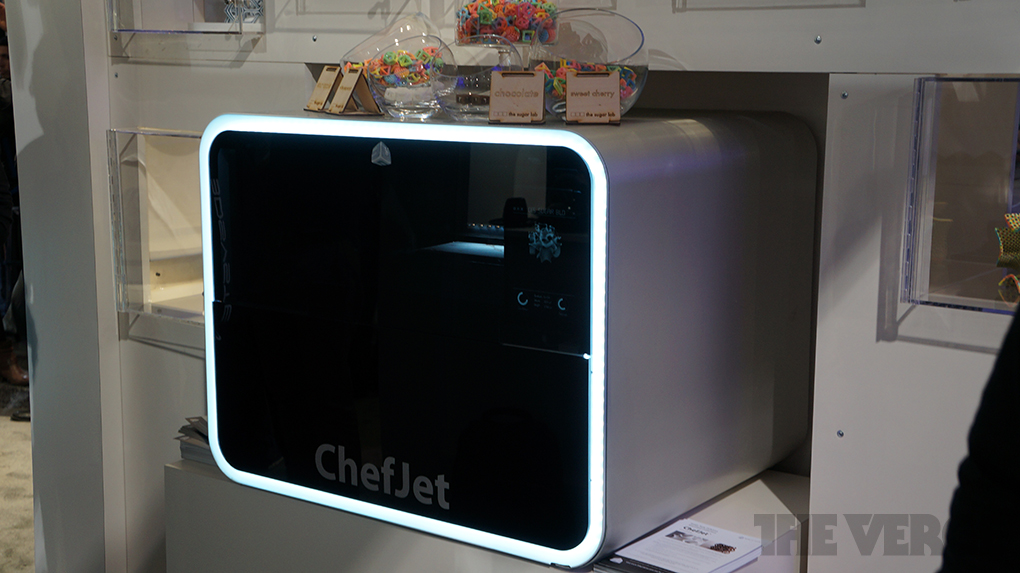 But since the technology is there to make a 3D-printed chocolate face, there's no reason why we can't have 3D-printed Hershey Kisses. We saw some 3D-printed candies at CES 2014 made from 3D Systems' ChefJet that looked much more like traditional confections, and they actually tasted good, too. However, those candies are very fragile — the ones made of chocolate hold up slightly better than the ones made of sugar, which crumble to sweet dust in your mouth immediately — and only people in California can order bags of them from Cubify. Currently, 3D-printed candy is localized to where companies like 3D Systems are, and with the ChefJet models priced between $5,000 and $10,000, consumers are not going to run out and buy one any time soon. If 3D Systems and Hershey can develop a way to make stronger, more portable 3D-printed chocolates, it'll be one more step toward making 3D-printed food more accessible, and acceptable, to everyone.