Share All sharing options for: Google Research project turns 64 years of music into a rock rainbow

Google has compiled the last 64 years of musical history in a large, rainbow-colored chart for both education and the hope that you might buy some of it on the company's store. Today Google's Research group put out a new project called Music Timeline that tracks the popularity of musical genres dating all the way back to 1950. Users can track each individual genre as time goes by, and both view and buy key albums along the way.

No classical music, but there's a reason

Instead of tapping Billboard charts, Google says the data is derived from artist and album information compiled from its Google Play Music service. The prevalence of any given genre is determined by the popularity of artists found in the libraries of Google Play Music users.

From the chart, it's easy to tell which genres have fared better than others. Easy listening and jazz, for instance, now make up just a small part of what they did in the 1950s, while pop and rock have remained mostly the same over the past 30 years. Not included on the chart is classical music, something Google says it's excluded given that it's typically cataloged by composition date, and not when it's recorded. 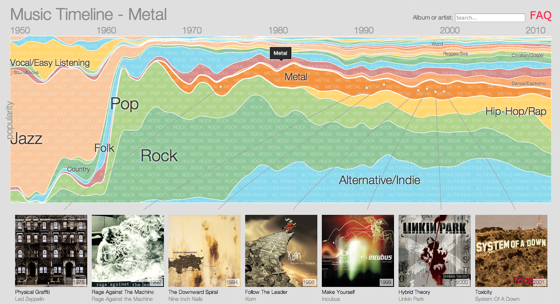 Google says the project is just the first of many with its music discovery group. It joins similar visual examinations, such as one that tracks denial-of-service attacks, another that shows visitors on YouTube, as well as one identifying social sharing on Google+. Many of those are still kept up to date; Google says it plans to keep this particular project updated every week.