Every January the Sundance Film Festival takes over Park City, Utah, but since 1995 the town has also played host to the festival's younger upstart sibling: Slamdance. Initially founded by a group of filmmakers who weren't accepted into Robert Redford's showcase, the Slamdance Film Festival has gone on to become a vital event in its own right — and one of its early discoveries was Christopher Nolan.

Nolan's first feature Following was a black-and-white mystery shot over the course of a year for around $6,000. It screened at Slamdance in 1999, and tonight the festival honored the director with its inaugural Founder's Award. Nolan then sat down to talk to the audience of filmmakers and fans about the lessons he learned as an indie filmmaker, his frequent collaborations with brother Jonathan, and how Brad Pitt helped Memento get made.

Christopher Nolan: Truthfully he did read the script, I mean that’s where the story [about Pitt being the first choice for the lead role] comes from, is he read the script and he met with me about it when he didn’t have any reason to know who I was or anything about it. And nothing came of it. Other than him being interested in it, I think within the sort of [talent] agency world where the script was circulating, just sort of perked up a bit of interest in what was a very obscure project, otherwise. And I think really that’s how it came to Guy Pearce’s attention, and you know, he sort of got the ball rolling. ... It was a very nice thing that he liked it.

CN: Jonah’s my brother, as most people probably know, so we’ve worked together on a lot of different projects for a long time. Really the process has been different on different films. Sometimes we’ve written completely separately. You know, he’s done a first draft, and then given it to me and I’ve done a second draft and given it back to him, and he’s done a third draft. Sometimes we’ve been a little more together in that process.

"We don't tend to sort of write together in the traditional sense."

Generally the way it works is we’ll get in a room together, throw a bunch of ideas around — a lot of arguments, a lot of fights, that kind of thing — and then he’ll go off and write something and then I’ll take it and write. We don’t tend to sort of write together in the traditional sense, and that’s been a very productive way of working for us. Particularly because it allows both of us to work on other things at the same time. But you know, he just gets busier and more expensive so it gets harder to get his attention, but it’s really been terrific having a brother to work with on these projects. It’s been an important part of why they’ve been any good, if they’ve been any good. 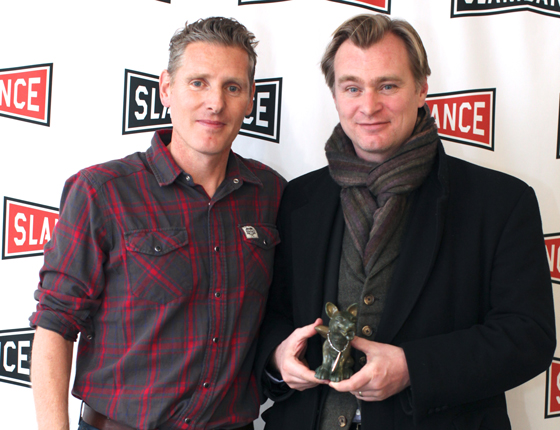 CN: Every film is a little bit different. I tend to start from scratch in the edit suite. My editor will do an assembly as we shoot, but I might never watch it fully. We’ll watch a scene at a time, and then we go back to dailies and review the dailies and we start putting it together. So the first few weeks when I cut the film is a process of discovery. And there are things that you’re thrilled with because they work better than you thought, and there are other things that you realize are going to be very difficult.

Cutting Inception with Lee [Smith], my editor, I remember we got to reel three and watched it. It was completely incomprehensible. And it took several weeks of sleepless nights of really trying to figure it out. Weirdly though, when I look back at the script compared with the way that section of the film turned out, it’s not that different. But it can be very hard to find those things. One of the reasons I don’t watch the assembly as a lot of filmmakers do, is it’s four hours long and it’s a terrible film. So I just don’t want to start from that place. I’d rather start from the place of its sense of possibility, which is what you have in the dailies.

But generally for me the editing process has been largely a process of feeling that you’re completely changing and reinventing the film — and then sitting back at the end of it and going, "Oh, actually that’s pretty much what it was intended to be," which has been a bit satisfying. But it can be a bit of a worry.

On internet speculation (and over-analysis)

CN: Well one of the things I took away from doing the festival circuit — having a film here, for example — is that anybody paying any attention to your film is a fantastic thing. I mean I remember the first time we were reviewed in, I think it was Weekly Variety, and it wasn’t a very good review, apparently. But I was just thrilled and I called my then-agent and he said, "Oh don’t worry, no one’s gonna notice it, it’s Weekly Variety." And I said, "But we got reviewed in Variety, it’s amazing!" "They didn’t say great things." I’m like, "Okay, well…" [laughs]

"The hardest thing for a filmmaker is to get eyeballs on your material."

By far the hardest thing for a filmmaker is to get eyeballs on your material. So I would never complain about people overanalyzing the detail. I mean, there can be a somewhat unrealistic level of analysis, in terms of divining the filmmaker’s intentions to be. But I think it’s a fun game anyway. I would never begrudge the attention on a film. Because it means that the film will have its chance. You get it out there, people see it; then they can judge it.

CN: There are a lot of filmmakers that have taken a very different approach than me. My friend Steven Soderbergh for example, who helped me with my first studio film, he’s always made a very, very specific point about going back and forth between different sizes of film. I’ve only ever been driven by story, you know. A set of characters that’d grab me. And I try not to really think too much about why I want to make a film. It’s just if you know you want to make it, then you sort of go for it. And I think there’s also a sense in which if you have the opportunity to work on a big scale, that opportunity’s not always going to be there, so I certainly avail myself of it while it’s there.

I would never want to go to making a smaller film in an artificial sense. I would never want to do it for the sake of it. I’d be very very thrilled and happy to do it if I found the right story and the right thing in the back of my head that I wanted to get across, and I’m pretty sure that’s something I will do eventually. But I’m not in any rush. I like working the way I’m working.

The lessons of 'Following'

CN: I think one of the things about having your first film, and spending the time you spend to get it made any which way — when you’re finished with it you sort of think, "Well, okay, we’re done, what happens next?" And then that’s the beginning of a very, very long, very arduous process. And in a lot of ways that’s where the real works begins. Certainly in the case of Following, it took us several years to secure distribution for the film and get it out there and released.

"The world isn't going to change the minute the lights come up."

The film gave us the opportunity to make a film on a higher budget, which was Memento. And that was a big leap for all of us, me in particular, in terms of spending somebody else’s money to make your own film and that kind of responsibility. And I think I figured because I had a crew of hundreds of people and union trucks and all this stuff, and we were shooting on 35mm — a proper film — that at the end it would go into movie theaters in a more easy way. I was completely mistaken. It was just as difficult getting that film out as it was with Following.

I think it’s one thing that filmmakers here, for the first time with the opportunity of showing a film, you should be very aware of. It’s not about the one screening you have here. The world isn’t going to change the minute the lights come up. It’s just doesn’t work like that. There’s a lot of time and a lot of effort, and it’s really the beginning of a long process — if you’re very fortunate. There’s a lot of hard work, and further opportunities, and avenues that have to be explored.