Samsung just announced its expanded Shape wireless audio solution for the home. The multiroom system was first launched in October with a bare-bones offering of a single $399.99 Shape M7 speaker, and an optional $49.99 wireless connectivity hub for use in homes where plugging the speaker directly into the router is inconvenient. Now, just three months later, Samsung returns with a smaller M5 speaker and HW-H750 Soundbar with wireless sub. That's a large enough portfolio to put category-leading Sonos on notice.

Details are scant at the moment. Samsung says the three-driver M5 speaker can be used alone or in combination with other Shape speakers, and it can be positioned either vertically or horizontally in your room. The "metallic" HW-H750 Soundbar delivers 320 watts of multichannel sound and can be wirelessly connected over Bluetooth to televisions supporting Samsung’s TV Sound Connect feature. The system is controlled by a free iOS or Android app. 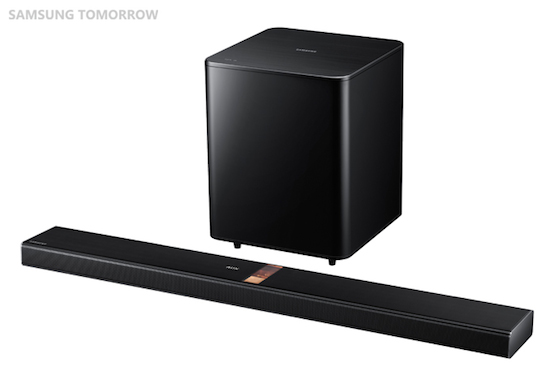 Samsung didn't mention any additional music services today which included Amazon Cloud Player, Pandora, Rhapsody, and TuneIn Radio at launch. It's also unclear if the M5 supports NFC and Bluetooth streaming directly off your smartphone like the M7 does. Unfortunately, Samsung also didn't announce any pricing or dates for its new Shape gear.

For those keeping score, the M5 looks to be Samsung's riff on either the Sonos Play:3 or Play:1, the Hub is the Sonos Bridge, the M7 is the Sonos Play:5, and the HW-H750 Soundbar with subwoofer is Samsung's take on the Sonos Playbar and Sub. Samsung did in a single financial quarter what took Sonos years to deliver. But that's exactly what Samsung does best: identify a product category where it wants to compete, copy what already works, and then overwhelm the incumbents with the vast resources of the Samsung Group.