The NSA is funding quantum computer work that it hopes will allow it to break virtually any encryption used today, The Washington Post reports — though there's no sign it's managed to crack the puzzle better than any of the other companies or agencies working on the same thing. Leaks from Edward Snowden reveal a $79.7 million research program called "Penetrating Hard Targets," including classified funding to research a quantum computer that could be used for cryptography. The Post says that much of the research is being done at the University of Maryland's Laboratory for Physical Sciences, but not much more is revealed about the program, including how far quantum computing work has actually progressed.

Quantum computing hinges, very broadly, on allowing individual bits (called qubits) to contain superimposed values of zero and one, vastly increasing computing power. Its implications for cryptography, medicine, and research have made it a major goal for public services and private industry alike: DARPA has devoted years of funding to quantum computing research, and Google launched its own "Quantum Artificial Intelligence Lab" last year. But while qubits have been stored for a limited period of time under certain conditions, and specialized machines have been built using quantum technology, that's not enough for practical code-breaking applications. Last year, for example,The Economist all but ruled out the possibility that the NSA had a crypto-ready quantum computer.

The NSA's program, part of the larger intelligence community "Black Budget," doesn't actually task anybody with building a quantum computer. According to the memo, it asks researchers to "conduct basic research in quantum physics and architecture/engineering studies to determine if, and how, a cryptographically useful quantum computer can be built." So while the grant fits with the NSA's general mission — and quantum computing could one day pose a real threat to present-day encryption methods — it's a lot more theoretical than the agency's ability to, say, seed malware to computers from miles away. 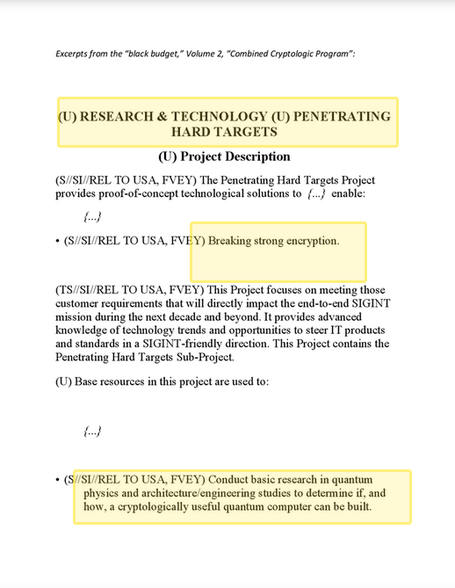