Beats Music hands-on: Dr. Dre has a playlist for you

Beats Music hands-on: Dr. Dre has a playlist for you

Beats Music doesn’t want to be like Spotify, the iTunes of the streaming music age. The new service, launching tomorrow morning, wants to feel like the radio station you woke up to as a kid, and the DJ you jammed to while drinking margaritas on spring break. Beats aims to supply the music for every mood with content curated by tastemakers it hired like Pitchfork Media editor-in-chief Scott Plagenhoef and L.A. hip-hop radio personality Fuzzy Fantabulous. Beats Music is personable, but there’s a catch: unlike every one of its competitors, the service offers no ad-supported free model. If you want to jump in, you’ll have to pay $9.99 per month for its subscription service. (AT&T customers will have exclusive access to a $14.99 per month family plan, which gives up to five users full access to the service.) Beats co-founder Dr. Dre and Beats Music CEO Ian Rogers have a very different idea for how streaming music should work, but does that mean the world’s hypiest headphones maker can stand up to the likes of Spotify, Rdio, and Pandora?

When you first open Beats Music, it asks if you identify as a male or female. It then asks you to pick some genres and bands you like from an ocean of bubbles it generates. You can tap on music you like, and long press on music you don’t. After you’ve made a few selections, the app pops up its curated home screen: a selection of playlists, bands, and albums based on what you’ve chosen. I got the latest Vampire Weekend album and "An Intro To Radiohead" — accurate, if not necessarily relevant choices. It’s still, however, a warm welcome to the world of Beats, since most other music apps just plop you onto a New Releases page upon signing up. Once you’re in, you can explore Beats’ 20+ million track catalog, which the company claims is nearly identical to what you’d find inside Spotify.

'The Sentence' lets you Mad Lib your music

If you head back to the app’s home screen, then swipe over, you’ll find "The Sentence," Beats Music’s real bread and butter. In "The Sentence," you fill out a Mad Lib filled with feelings, locations, and scenarios, in order to find the right track for your mood. My first try was "I’m in bed, and feel like waking up, with your mom, to musica Mexicana." For this mood, the app offered me "La Trampa" by Mexican singer-songwriter Ana Barbara. "The Sentence" is an interesting angle on Songza’s "pick your moment" radio stations, but is perhaps a bit deceptive since the final fill-in-the-blank is a genre, which seemingly provides most of the impetus for which song starts playing. If you don’t feel like Mad Libbing, you can also pick one of Beats’ "Activity" playlists like "Breaking Up," or one of the artist-oriented playlists curated by Beats itself. I was pleasantly surprised by thoughtfully crafted playlists like "Belle & Sebastian: Songs About Childhood," which went beyond a simple group of deep cuts. 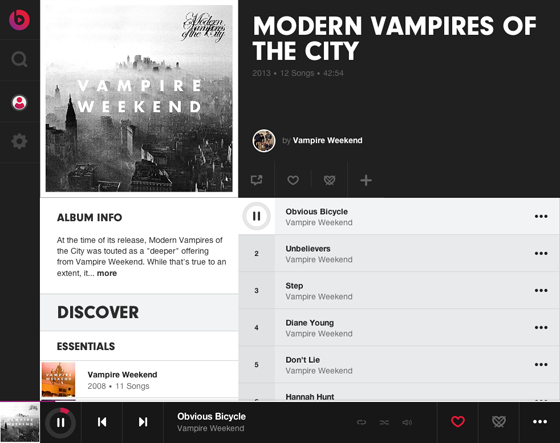 Beats Music on the web

In my tests, Beats’ curation was impressive, but nowhere near as good as Songza or Pandora for everyday listening. Those services intermix both humans and algorithms, while Beats seemingly favors editorial curation. The bigger problem I had with Beats Music, however, was its Offline Mode. Like Rdio, Beats Music struggles when you have limited or no connectivity, even if you’re trying to listen to music you’ve saved to Offline Mode. If you’ve gotten on the subway or turned on Airplane Mode, the app doesn’t realize you’ve lost connectivity and keeps trying to connect. After a few subway rides during the day, the Beats Music app got pretty annoying.

Visually, Beats is a good-looking app. Its Now Playing screen is refreshingly different, overlaying a giant play / pause button over album art. There are also like and dislike buttons like in Pandora, a Share button, and a plus sign that lets you add music to a playlist or save it offline. Like Rdio, Beats lets you save music to a centralized Library, which is convenient, since navigating the app's interface can be a bit clumsy and illogical. Downloading tracks for offline mode is speedy, but picking and playing tracks is noticeably slower than in an app like Spotify, which makes playback speed its top priority.

No matter which way you slice it, Beats Music is very late to the game

No matter which way you slice it, Beats Music is very late to the game. The service gets off on the right foot by launching on iPhone, Android, Windows Phone, and web — but in the digital music space, your friends and what they’re listening to are increasingly important. Many of them are on Spotify, some are on Rdio, a couple are on Google Music, and none of them are on Beats Music. This is the old chicken-and-egg problem, of course, but despite its daring first effort Beats Music doesn’t provide enough value added to convince me to switch. The company’s business model also leaves a few questions unanswered. Beats hopes to build a solid user base of paying subscribers, yet Spotify says that just 20 percent of its users pay for the service. Also, Beats’ web player is far buggier and has fewer features ("The Sentence" is absent) than its mobile app and other competing services.

But perhaps Beats Music doesn’t need to win me over. Beats has a strong brand presence thanks to its iconic headphones, and seemingly tons of money to spend on marketing. Beats’ audience might also not care for power-usery settings the way I do. "Change your Facebook settings so you can share the goods you’re listening to," the app beckoned when I tried to enable Facebook sharing. If Beats is smart, it will offer several months of free music to anyone who buys a pair of its headphones in hopes that they’ll stay on afterwards. Investing in the future in such a way might be Beats’ only way to catch up with Spotify. Otherwise, Beats Music might be only for Beats-heads.