Typo Keyboard review: mistakes were made

For all the times you wish your iPhone was a BlackBerry

Too many times a day, I dig into my pocket and pull out my iPhone. I click the home button, leaving my thumb for a half-second while TouchID recognizes my fingerprint and grants me access. Then, I almost always type something. Virtually every time I use my phone it’s to tweet something, add a task to my to-do list, search for an artist in Rdio, or respond to a message. I type in constant, short bursts, usually as I’m walking down the street or waiting in line at Starbucks.

Before I learned to type by tapping on glass, I had a long, sordid history with smartphones and physical keyboards. It started with my Palm Treo 650, the first phone that ever made me feel productive. I owned a BlackBerry Curve, a Motorola Q (my favorite keyboard ever), and a truly awful HTC Ozone. But I’ve never wanted a phone as much as I wanted the Dell Venue Pro, the Windows Phone 7-powered device that had both a big, beautiful display and a slide-out portrait keyboard that was incredibly comfortable to type on. It seemed perfect.

The Venue Pro died before it ever really breathed life, but a tiny company called Typo is trying to revive its essence. The pitch is simple: the $99 Typo Keyboard case adds a BlackBerry-style keyboard below your iPhone’s display, so you get everything great about the iPhone, except instead of typing on your screen, you can type on a tactile, clicky keyboard. I’m clearly not the only person who’s thought that could be great.

The dream of the BlackBerry is alive in Typo. Somebody wake me up. 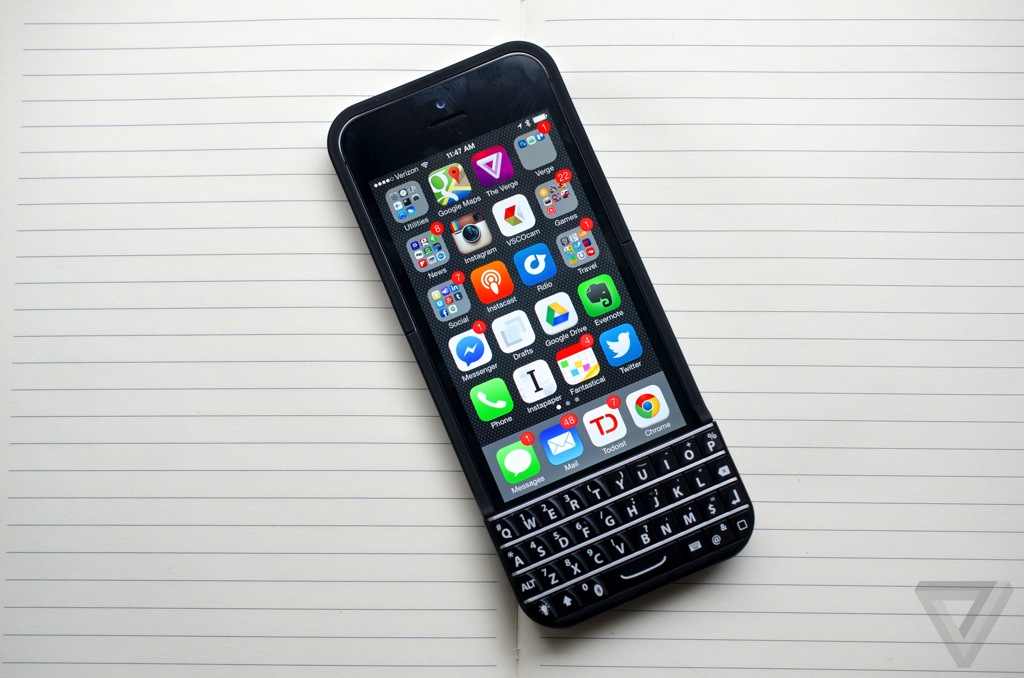 Getting the Typo set up and connected is impossibly easy. The two halves of the thin, matte black plastic case slide easily onto your iPhone 5 or 5S and connect firmly and simply in the middle. Press and hold the Bluetooth button until a blinking blue light appears, then open Bluetooth settings on your phone and select Typo Keyboard. It pairs almost instantly — I was ready to go in six seconds.

Setup is easy — nothing else is 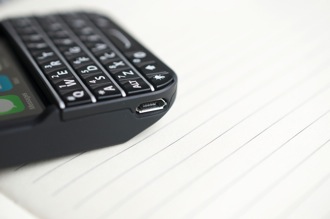 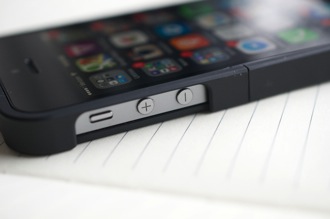 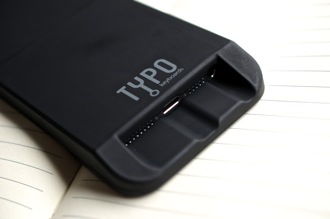 That’s where the list of good things about the Typo ends. The rest of my experience has been a poisonous mix of mistakes and missed opportunities, leaving me waiting with bated breath for the moment I could tear the case off my iPhone and go back to the way things should be. Using the Typo for a week killed my battery, because the slightest brush of a key is enough to make the iPhone’s screen blink on. The case also blocks my phone’s Home button, and I guess I like TouchID more than I thought.

But the only thing that really matters is that the Typo isn’t a good keyboard. Its four rows of backlit, angled, slightly raised black keys with white letters and borders may look suspiciously (and perhaps illegally) like they were lifted from a BlackBerry, but there’s no confusing the two. The Typo’s keys wobble in place, and have too much travel and a harsh, ugly bottoming-out feeling. The whole frame gives as you type, and the whole contraption feels like it’s about to snap, or like each key might stick. Period and comma are buried as secondary keys — along with numbers and symbols — so I have to hit Alt+M every time I end a sentence. Long-pressing a key just capitalizes it, another function that seems less useful than the secondary character.

It may look like a BlackBerry keyboard, but there's no confusing the two

I am, I’ve found, slightly faster on the Typo than I am on my iPhone’s touchscreen, and I can type somewhat effectively without looking. But I’m a lot better at both on a BlackBerry, and I don’t use one of those either.

The Typo feels like a cheap knockoff of a BlackBerry keyboard, like someone thought all that mattered was the shape of the keys and the font styling. And it only half-scratches the BlackBerry itch, too: the BlackBerry devices most people remember had a trackball or trackpad above the keyboard, meaning you didn’t actually need to touch the screen to use the device, and there were keyboard shortcuts galore. Those, as much as simple typing speed, were what made a BlackBerry fast to use. The Typo, which makes my iPhone longer, heavier, and awkwardly top-heavy, forced me to constantly shift between keyboard and screen: tap in the text box, type, shift the phone in my hands so I can reach the send button, hunt for the Home key, scroll on the screen, contort back to type in the browser. 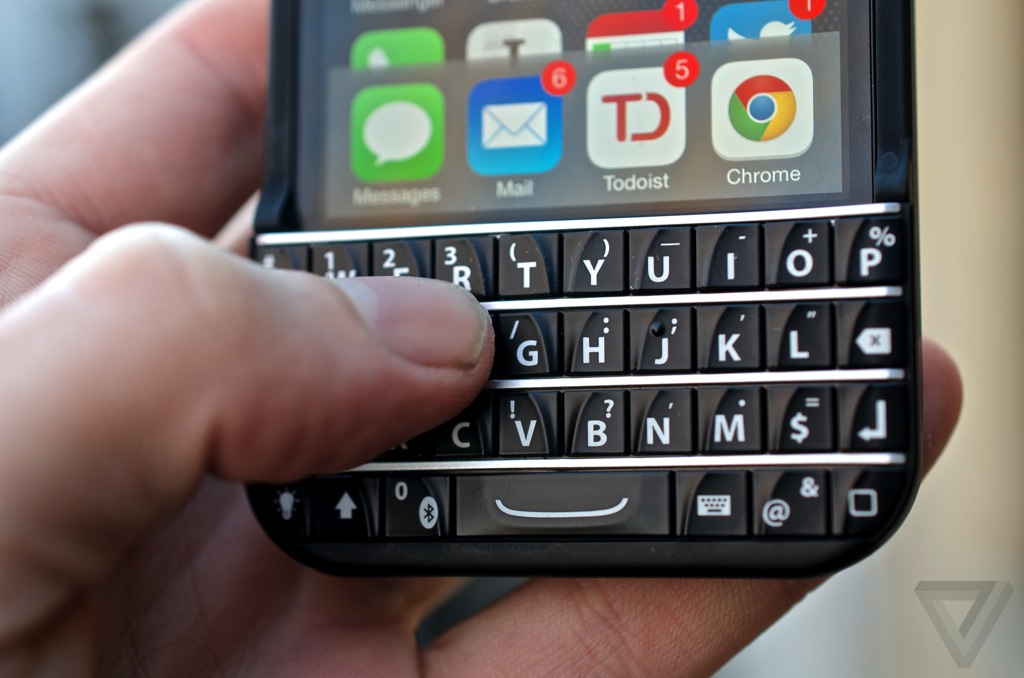 iOS and the Typo don’t get along, either. Not at all. Autocorrect disappears as soon as a keyboard is connected, so I was left to my own devices for capitalization, stray apostrophes, and deciphering that I always type "bill" but actually mean "will." There are no arrow keys, which would be a truly useful feature for copying, pasting, and editing — every time I make an error, and there will be many, it’s back to the touchscreen to fix it. These quirks are ripped straight from the BlackBerry layout, too, and the layout makes even less sense here than it does on a BlackBerry.

Accessing dictation requires you bring up the on-screen keyboard, which you can do with a button on the Typo, but most of the time the on-screen keyboard appears anyway. (Two keyboards are apparently better than one.) If I hadn’t typed in a while, the keyboard took a second to re-connect, and I frequently typed a full word before the Typo actually registered anything.

Some of the Typo's problems are iOS' fault, but either way they're problems

Typing aside, just attaching the Typo causes problems. Its slightly-raised lip makes it hard to tap at the bottom of the screen, too, which is where buttons like "Send" typically are. Its overhang also makes the headphone jack and Lightning port harder to access, and mutes the bottom-firing speaker somewhat. Even pressing the power button is harder next to the case’s ridged edge. There’s a Micro USB port cut out of the bottom left side of the device, which you’ll need about once a week to charge it – but since there’s no physical connectivity between keyboard and iPhone, you’ll have to charge both pieces separately. A Mophie-like battery case with a keyboard could make a case for a permanently-attached keyboard this size, but the Typo offers nothing of the sort. 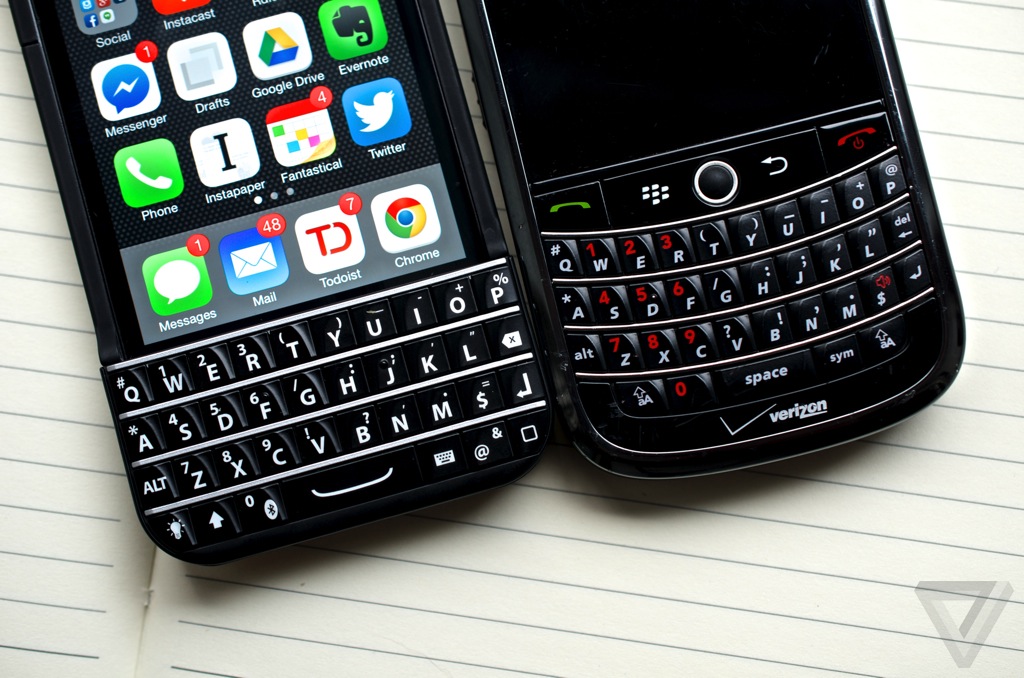 If I were an executive at BlackBerry, I’d be paying close attention to the Typo, and not just for the blindingly obvious legal reasons. There’s clearly huge interest in adding some tactile feedback to the iPhone typing experience. Not that it’s a good idea — iOS is clearly impeded by a physical keyboard, and without a much more robust controls and shortcuts system no such accessory is ever going to be genuinely useful. But Typo’s sellouts indicate that some people obviously want physical keyboards for the iPhones, and nobody makes those like BlackBerry.

In suing Typo, all BlackBerry is doing is lending credibility to what is essentially an overpriced, underdeveloped knockoff, a kitschy accessory that somehow found a mainstream audience because Ryan Seacrest got interested. The Typo is in every imaginable way a bad product. It does only a few things that it logically should, and it does those few things poorly.

Using a physical keyboard did make me miss my old phones, for a second. But I’m more likely to boot up my Treo 650 from 2005 than I am to keep using the Typo.