Share All sharing options for: HP brings back Windows 7 'by popular demand'

HP really wants people to buy a Windows 7 PC instead of a Windows 8 machine. The PC maker has been emailing customers over the weekend noting that "Windows 7 is back." A new promotion, designed to entice people to select Windows 7 over Windows 8 with $150 of "savings," has launched on HP’s website with a "back by popular demand" slogan. The move is clearly designed to position Windows 7 over Microsoft’s touch-centric Windows 8 operating system.

In fact, if you browse to HP’s home section and navigate to desktop PCs then you’ll only be presented with Windows 7 machines by default as no Windows 8 PCs are listed until you start customizing the section using optional filters. The laptop section does include Windows 8 machines, but it also prominently advertises a Windows 7 laptop. Even HP’s all-in-one section promotes the company’s 21-inch Android-powered PC over Windows 8 alternatives. 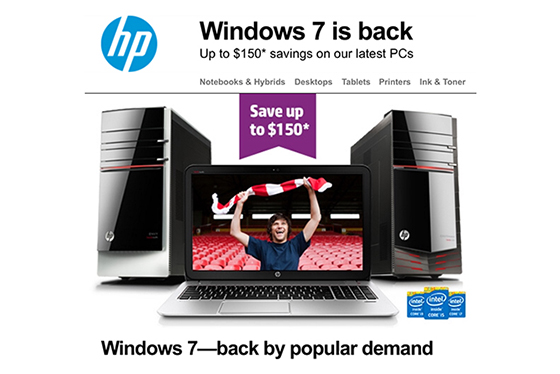 HP’s "back by popular demand" wording is a clear knock towards Windows 8 which has struggled with perception issues thanks to what some see as a confusing mix of desktop and tablet-style computing. Microsoft has tweaked some parts of the OS with Windows 8.1, but it looks like Windows 9 will bring more significant changes and a move away from the Windows 8 branding. In the mean time, HP is the first PC maker to take advantage of Windows 7 as a selling point over Windows 8, and it follows similar moves from OEMs who chose to promote Windows XP over Windows Vista years ago.