How Gatorade turned water into 'the enemy of performance'

Share All sharing options for: How Gatorade turned water into 'the enemy of performance'

After following a link sent to a food policy listserv, Huehnergarth stumbled upon a video describing the strategy behind an award-winning mobile app game from Gatorade — called Bolt! — that featured Gatorade-sponsored sprinter Usain Bolt racing through a series of challenges and roadblocks to accumulate points. The game was initially released in 2012, and then updated in April of last year. In that update (which is no longer available in the iTunes store) Bolt needs to pick up Gatorade to supercharge his performance and avoid droplets of water that slow him down.

The video that Huehnergarth saw, posted as an accompaniment to the game's bronze prize from the 2013 Interactive Advertising Bureau's MIXX Awards, was pulled from the website after she wrote a blog post earlier this month decrying the game and its underlying strategy. In a copy of the video obtained by The Verge and posted below, however, members of media strategy group OMB (who developed the game) describe Bolt! as "an entertaining and competitive way to reinforce to teens that consuming Gatorade would help them perform better [...] and that water was the enemy of performance."

"Marketed to children... for a wide variety of inappropriate uses."

Of course, that's not true for the vast majority of youth. Unless they're hardcore athletes, the American Academy of Pediatrics recommends water as a kid's friend, not their enemy, where physical activity is concerned. In a 2011 report, the Academy went so far as to advise against the widespread consumption of sports drinks, noting that the beverages (along with energy brews) are "marketed to children and adolescents for a wide variety of inappropriate uses." PepsiCo, which owns Gatorade, itself appears to see the nutritional value in water: the company last year signed onto Michelle Obama's "Drink Up" campaign, specifically designed to get people to drink more of it (bottled, of course). "That's what really galls me," Huehnergarth says. "Pepsi signed onto this initiative, and then under the radar they're still working this other angle with kids."

So is the game a little shady? Sure, particularly given its wild success in engaging its target audience. Bolt! racked up myriad advertising awards, was downloaded 2.3 million times, and saw the Twitter endorsement of celebrities including Justin Bieber and Bolt himself. But in the wild west of food marketing, is it really surprising that a beverage line owned by PepsiCo would decry the health benefits of H2O for the sake of sales? Experts say no — and point out that this instance is only the latest in a series of ploys by food companies to promote their products with ruthless effectiveness, and without much in the way of federal regulation.

Bolt! is far from the first effort by a food company to target youth through gamification, where thinly-veiled advertisements are disguised as entertainment. They've been doing it online for years, points out Jennifer Harris, the director of marketing initiatives at Yale's Rudd Center for Food Policy & Obesity. Websites like Burger King's "BK Crown" or McDonald's "HappyMeal" offer colorful, engaging game hubs that feature a bevy of each food chain's offerings, whereas products like Fruity Pebbles cereal and Pop Tarts have dedicated game sites of their very own. Such games are pervasive because they work: users are more engaged, and for longer periods, than they would be during a 30-second TV commercial, and the sites circumvent self-imposed industry regulations about how many food ads (and for what kinds of foods) can appear during children's television programming.

"These games can be accessed from pretty much anywhere."

The push into mobile games, however, is something of a newer phenomenon. "A few years ago, we never would have seen these games," Harris says. "Now they're everywhere." Of course, the move to mobile is a logical one: as more kids and teenagers rely on mobile devices, food companies are simply keeping pace with the trend. But Harris, Huehnergarth, and other experts worry that mobile games might become a particularly pernicious phenomenon. "It's easier for parents to keep track of what a kid is watching on TV, or what they're doing on a computer," Harris says. "It gets a lot more difficult when these games can be accessed from pretty much anywhere."

In perusing the iTunes app store, it's decidedly tricky to figure out which games are sponsored by food companies and which aren't — they all look pretty much the same. But in one study out of the Rudd Center, researchers pulled up 34 iPhone apps for beverages alone, including those designed to promote Coke and Red Bull, as well as eight major fast food companies with at least one mobile app game. A quick scan of apps available today pulls up games including Cheetos' "App of Massive Distraction" where players can launch themselves into "a snack-flinging frenzy" and M&M's "Chocolate Factory" that asks users to help "guide the candies into the bags." Both are clearly advertisements, but neither seem nearly as dubious as a game deriding the benefits of water.

Whether a game's message is sketchy or not, food companies are largely free to design and promote the apps however they want — and often use celebrity endorsers, or mimic other popular mobile games, to reach a big audience. That's because, despite years of debate over how food is marketed to youth, federal agencies offer little in the way of regulations that would rein in online or mobile promotion. 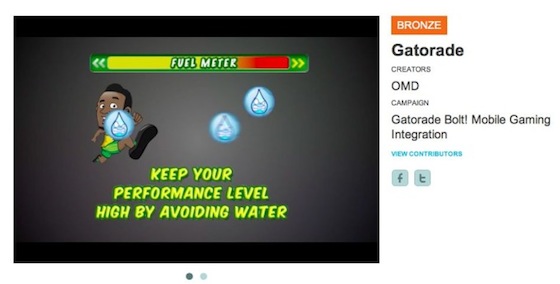 In large part, the food industry regulates itself through series of agreements reached by major food companies about how they will and won't promote products — particularly those with minimal nutritional value. In 2006, 16 major companies formed the Children's Food and Beverage Advertising Initiative, whereby they committed to improve the standards for ads targeting kids. As part of that initiative, which includes PepsiCo, companies have agreed not to advertise any foods to kids under the age of 12 unless they meet certain nutritional criteria. For PepsiCo, which did not respond to repeated requests for comment via phone and email, the only product that meets the criteria is Quaker Oatmeal. "Pepsi said they wouldn't market Gatorade to children under 12, period," Harris says. "I imagine that in this instance, they would argue that the game was for a general audience and so it doesn't fall under that agreement. I don't know how they can say that, but that seems to be the message."

The food industry largely regulates itself

Food policy experts and government officials have long sought tougher standards, but so far, they haven't had much luck in passing any. In 2010, a series of regulatory guidelines compiled by experts at agencies including the FDA, CDC, and FTC, were submitted to Congress. The guidelines would have strictly limited which foods could be marketed towards youth — excluding even peanut butter — but would also have been, yet again, entirely voluntary. Lobbyists for the food industry pushed back, arguing that the rules would "virtually end all advertising" towards those younger than 18. The regulations stalled in Congress, and were just last week "killed for good," Harris says, with a single sentence in the 2014 omnibus spending bill.

"I believe this is a deceptive campaign."

Huehnergarth, for one, isn't quite ready to let that Gatorade advertisement get a free pass from regulators. She last week filed a complaint with the New York State Attorney General, arguing that because the adver-game included a "deceptive message" PepsiCo should be fined for false advertising. "We all know that the role of the industry is to generate profit, and I understand that," she says. "But from a scientific point of view, I believe this is a deceptive campaign — and there should be meaningful accountability for that."