These glasses let you see the world through your favorite typeface

These glasses let you see the world through your favorite typeface

It's cool to understand typography now, to have a favorite typeface, and to be able to bore your friends about the differences between Arial and Verdana. The Japanese company Type wants to put your favorite typography on your face in the form of glasses. Type has created two lines of glasses that take design inspiration from a couple of the most well-known typefaces, Helvetica and Garamond. Each line has three versions of the spectacles — light, regular, and bold, of course — that delineate the thickness of the frames.

The glasses do a pretty good job at reflecting the characteristics of each typeface. The Helvetica frames look like they'll blend into your face — much like the typeface has blended into our world, becoming a presence that's legible, accessible, and somewhat boring. Forgoing passive-aggressive personality, the glasses make a statement by making no statement at all and representing nothing but their function — to help you not run into the person in front of you on the sidewalk.

Would you like to see through Helvetica or Garamond?

The Garamond line takes a different approach, highlighting the deliberate differences in the typeface's stroke weights in the spectacle's bridge and frame. They are pronounced and round, giving off an air of elegance and intelligence with a slight hint of pretentiousness that no doubt channels the typeface's 16th century French roots. 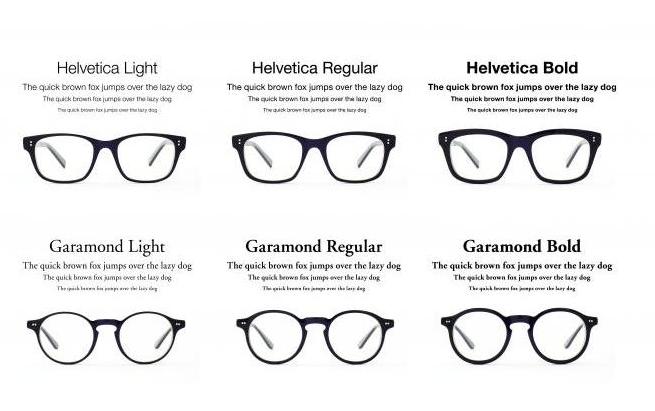 If you simply must know that you've dotted all the i's and crossed all the t's of your personality in your eyewear, you can get these glasses beginning January 30 for ¥24,150 (about $231 USD). Maybe they're just Warby Parker knockoffs, but the idea that we could see Typewriter-inspired glasses soon should both delight and enrage designers everywhere — personally, I'm holding out for Bodoni.