Share All sharing options for: This wooden arcade box packs all the gaming power you need in a vintage package

No one said gaming PCs have to be ugly — Love Hulten's R-Kaid Revelation is a prime example of an "all-in-one" gaming system that can be both functional and beautiful. The Swedish designer and craftsman made this gorgeous arcade box made out of walnut and copper, which features two wireless joysticks and a transparent, backlit LCD screen that shows the innards of the machine when in sleep mode.

Its walnut body is just as beautiful as it is functional

The R-Kaid Revelation doesn't just look nice — it's actually a powerful computer, too. It's got a custom interface devoted to over 12,000 pre-installed games, and it can boot into Windows for more demanding titles. It runs on an Intel i5 CPU, 8GB of RAM, and a GTX 670 GPU with 2GB of memory — it's not the most high-end system out there, but it should be capable of playing most modern games. The classic game titles are all controlled by the joypads, which are concealed in the machine's body in drawer-like compartments. Also concealed in the main chassis are a wooden Bluetooth keyboard and retro mouse for regular use. For a device to look so beautiful on the outside, it's amazing to see how well things can be stored on its inside, giving it extra function and utility that doesn't compromise aesthetics. 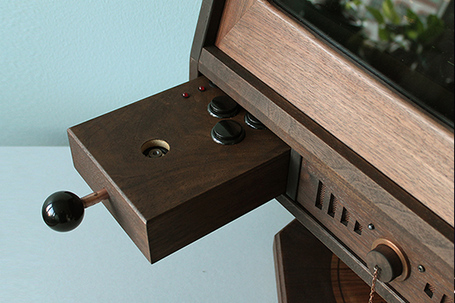 This isn't the first modern technology item Hulten has recreated in vintage wood style. He's made a MAME machine with wireless joysticks and trackball pad as well as a built-in projector and sound system. He's also dabbled in non-gaming related creations, like his beautiful cylindrical water cooled concept computer dubbed "The Shrine," and many more objects in his distinct style. You can see all of these and more of Hulten's distinctive projects at his website.