'Sex with Glass' is getting either sex or Glass wrong

'Sex with Glass' is getting either sex or Glass wrong

Called Sex with Glass, the app shares some DNA withÂ James Deen's parody video: assuming that you and your partner are both participating in a closed beta that requires purchase of a $1,500 headset, you can both don the fragile prototypes and have extremely cautious intercourse while watching a live camera feed from the other person's viewpoint. There are a few other commands ("Okay Glass, play Marvin Gayeâ¦" and "Okay Glass, give me ideasâ¦") and a few dirty puns, but these are all distractions from the main event. Afterwards, it promises to "put all the footage together" into a video, which will disappear five hours after being constructed.

The idea is an interesting one, even if my first mental association is the terrifying consciousness-mirroring system used by the thrill-killer in Strange Days. In a science fiction novel, it would open up all sorts of avenues for character development: are people using it to achieve a higher level of empathy, enabling a double-vision that let them both see and be their lovers? Is it a symbol of high narcissism, worn by people who can't enjoy an encounter unless they can *watch* themselves enjoying it? Unfortunately, these questions will never be answered, because the only one I can articulate after reading about Sex with Glass is why bother?

Sex with Glass barely seems to exist yet, so it's hard to really have a problem with the product. There's not even anything inherently wrong with the premise. But the app's (moderately not-safe-for-work) website undercuts everything the team is apparently trying to do.Â Sex with Glass promises "basically, the whole picture," and it provides helpful illustrations of "what he sees," what she sees," and the aforementioned whole picture -- it's likely that not everyone using the app, assuming anyone does, will be heterosexual or fit standard gender categories, but that's not what we're getting here. What does he see? His lover, shot from behind. What does she see? Wellâ¦ also herself, from the neck down. With the exception of couples shots, every single viewpoint photo appears to be either men looking at women or women looking at themselves.

If that sentence looks familiar, it might be because it's a lot like a frequently-quoted aphorism from art critic John Berger, penned in 1972: "Men act and women appear. Men look at women. Women watch themselves being looked at." This wasn't a good thing in the essay; Berger pegs it as the result of women being born "into the keeping of men." But it's a surprisingly literal description of ads for a 2014 app that's supposedly about two partners sharing a reciprocal experience. What's the point of letting people see through each other's eyes if only one person is getting watched?

"That's for all the ladies out there."

There is, however, something for women in Sex with Glass: a Snapchat-esque privacy setting. "You'll be able to watch your videos for 5 hours until they are deleted forever. That's for all the ladies out there." Leaving aside the question of whether the first five hours after sex are really the point at which one wants to watch the encounter, Sex with Glass has essentially opted to market its self-destruct system by reminding everyone that these tapes are fairly harmless for men but a potential catastrophe for women. Without "for all the ladies," the line is about ephemerality and privacy for everybody. With it, it's pretty much about revenge porn. Guess which one frisky Glass owners would rather think about. 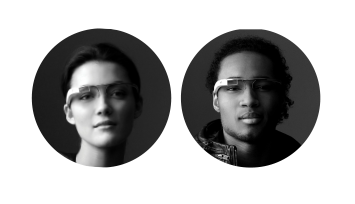 As an interesting aside, at least two people whose photos adorn the Snowfall-esque site may not be happy about it: the app's creators have pulled and cropped a pair of images from the official Google Glass scrapbook, setting them right above a series of lingerie shots. The app's real problem, though, is that it's found itself in an awkward place between our ideas about Glass and our ideas about sexuality.

Glass has been billed, since its very first concept video, as a tool to connect people. It's a way to let someone walk a mile in our shoes, or at least see ten seconds of a concert through our eyes. But the popular conception of sex is a one-way affair of women performing for or submitting to menâ¦ and the creators of Sex for Glass seem to have no idea how to show off anything else. No matter how close to or far from reality that image is, no matter whether it's something most men and women tolerate or reject or genuinely want, it's fundamentally at odds with a product that's about sharing two independent, different, but mutually pleasurable experiences. You can have Glass or you can have sex, but the way things stand now, we don't seem to want to explore the real potential of Sex with Glass.