The XC1 wristwatch is the '70s design of the future

The XC1 wristwatch is the '70s design of the future

Watches have seen something of a design revival recently, with many buyers looking to small niche brands to provide them with something unique. One such brand is Velox, and its mission is to refine the classic watch and bring it up to date. Its first product is the XC1, which looks very much like modern take on Braun's classic digital watch, the DW20. Velox doesn't call out that association explicitly, though, instead describing its look as "futuristic simplicity."

You’ll find that concept — holding onto the past while simultaneously marching into the future — repeated by any number of companies. Design and processes have matured to the point where it’s possible to create technological marvels that subtly play on our historical notions of what the future will look like. Staying true to functionalist principles adhered to by iconic designers like Dieter Rams, the XC1’s function is its form: the focal point is a simple LCD that displays the time, and there’s little decoration to take away from it.

"You have a built-in filter as a designer that crystallizes what is relevant in a modern product."

These principles help the XC1 look both unique and modern while still revering historical design. "I believe you have a built-in filter as a designer that crystallizes what is relevant in a modern product," says André Olovsson, Head of Design at Velox; keep what’s important, and cast aside the rest. A great example of letting go of the past is the XC1’s strap; although its face is steel, the strap is silicone, and can be swapped out for a different color band. The use of silicone also makes it very light for a metal-faced watch; it weighs just short of 1.5 ounces.

The optimistic futurism that prevailed through design in the '60s and '70s holds a great influence over Olvasson, who has a collection of 'inspirational' images depicting watches like the Omega Time Computer I (TC1), as well as imagery from 2001: A Space Odyssey, Moonraker, and The Green Slime. Although the future dreamed by Kubrick and others hasn’t come to pass, the objects Olvasson and other present-day designers are crafting would so easily fit into many classic sci-fi movies’ fictional worlds.

"The visions of the '60s and '70's, the 'future seen from the past,' they're extremely cool these days," says Olvosson, who has worked with watches since graduating in 2007, and previously designed timepieces for Lambretta, another brand owned by Velox's parent company Capella. While he reveres the designs of Rams, he cites the work of architect Oscar Niemeyer and artist Syd Mead (who was involved in classic movies like Bladerunner and Tron) as a huge influence.

At first glance, the XC1 evokes memories of something much older: the DW20, Braun’s first digital watch. The DW20 was designed by Dieter Rams and Dietrich Lubs, Braun's prolific creatives whose every product brought us closer to a functionalist future. Visually it’s more than a few steps removed from the DW20, but it does resemble something Braun’s famed designers may have created if they had the complex processes and materials available today. 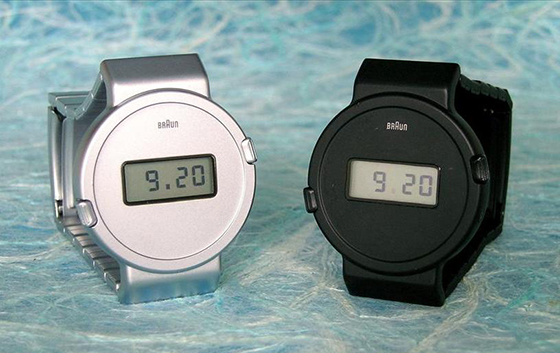 Any resemblance to the DW20 is purely coincidental, or perhaps a sign of Rams' continued influence over product designers, Olvasson tells me. "I'm very inspired by Rams, but actually I didn't think of the DW20 when I sketched the XC1 ... I wanted to make a watch that had a digital movement but a round shape, to not lose the symbol that we relate so much to time and watches.

Moving forward, he hopes Velox can challenge classic watch segments with a refined vision. The company is treading a fine line right now, trying to bring classic elements found in Braun and other companies' back catalogs into the modern era. Braun sold the license to sell watches under its name a few years ago, and Zeon, the company that bought it, is taking a similar approach to Velox’s. In addition to producing replica versions of classics, Zeon has attempted to update Braun's design language with timepieces like the BN0036. While it's an attractive watch, you could argue that, apparently accidentally, Olvasson and Velox have stayed truer to the Braun of old than the company that owns the brand.