Microsoft may have secretly paid YouTube video creators to promote the Xbox One, but it's not the only game company with a hand in the cookie jar. Video game publisher Electronic Arts has an entire program which pays YouTube fans to promote games like Battlefield 4 and Need for Speed: Rivals.

It's called Ronku, and If a report at NeoGAF is accurate, the company pays gamers quite a bit: $10 for every 1,000 views, or roughly $200,000 for an entire 20,000,000-view Battlefield 4 promotional campaign. In order to qualify for some of that money, YouTube video creators apparently have to follow specific instructions about how to promote the game. 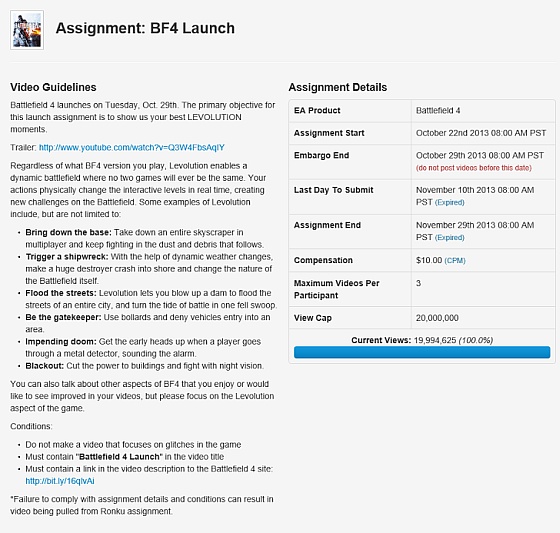 The problem, of course, isn't that EA hit upon a fantastic way to advertise its new games. Like Microsoft, the company may not be telling YouTube video creators to disclose that they're getting paid. The Federal Trade Commission requires endorsers to "clearly and conspicuously" tell their audience that they're shilling for a company, but the alleged documents at NeoGAF suggest that EA expressly forbids them from doing so:

"You agree to keep confidential at all times all matters relating to this Agreement and any Assignment including, without limitation, the Details and Compensation listed above."

While we haven't been able to independently confirm the text of a Ronku non-disclosure agreement, confirming the existence of the Ronku program itself is easy enough. The Ronku website is right here, at the Electronic Arts domain name, and its source HTML indeed describes a website that pays its members for completing assignments. Also, the URL shortlinks in the NeoGAF documents are not only real, unique, and feature in many YouTube videos that match the company's criteria, they each have URL tracking modules inside of them which mention YouTube social media campaigns.

Earlier today, Microsoft argued that there was nothing special about its marketing partnership with Machinima, and Machinima said it would require all its participants to clearly disclose the promotional nature of such partnerships in future. We've contacted Electronic Arts to comment on Ronku, and we'll let you know what we hear.

Update: "Through EA's Ronku program, some fans are compensated for the YouTube videos they create and share about our games," a company spokesman confirms. "The program requires that participants comply with FTC guidelines and identify when content is sponsored. User-generated videos are a valuable and unique aspect of how gamers share their experiences playing the games they love, and one that EA supports."

When asked whether participants truly can and have disclosed their relationship in the face of any non-disclosure agreements they might have signed, EA would only say: "We explicitly state in the Terms & Conditions of the program that each video must comply with the FTC's Guidelines concerning Use of Testimonials and Endorsements in Advertising."