Archaeologists have discovered the tomb and mummy of a previously unheard-of pharaoh. Woseribre Senebkay was found close to a larger burial site in Abydos, which researchers unearthed earlier this month and is believed to belong to Sobekhotep I. Senebkay's tomb is smaller in scale, but the discovery is more significant — it proves the existence of a separate Abydos Dynasty that ran concurrently with the 15th (Hyksos) and 16th (Theban) dynasties in Egypt's Second Intermediate Period (1650–1550 BC). 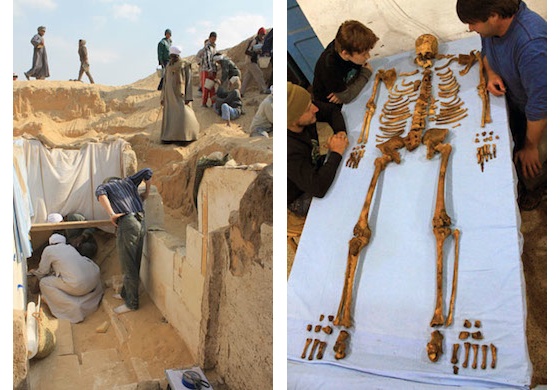 Senebkay's mummy is not one of the better preserved examples found in Egypt — it had been "ripped apart" by plunderers. But the pharaoh's funerary mask, canopic chest, and debris from the coffin remained in his tomb, and early research on the body suggests that Senebkay stood 5'10" (1.75m) tall and died in his mid to late 40s. The canopic chest was made from wood and had been reused; it bears the name of Sobekhotep I under a cover of gilding, pointing to the Abydos Dynasty's economic struggles.

"It's exciting to find not just the tomb of one previously unknown pharaoh, but the necropolis of an entire forgotten dynasty," noted Dr. Josef Wegner, who led a team from Pennsylvania's Penn Museum on the dig. "Continued work in the royal tombs of the Abydos Dynasty promises to shed new light on the political history and society of an important but poorly understood era of Ancient Egypt."