“I don’t know what to say about the film, except 4,207 days ago we started shooting this film and we’re really happy to be here.” It was Sunday night, and director Richard Linklater was addressing a sold-out Sundance audience for the debut of his latest project, Boyhood. Festival audiences are used to seeing premieres of highly anticipated new films, but the energy in the Eccles Theatre was at a higher pitch than usual — and the director of Dazed and Confused and A Scanner Darkly was ready to unveil the most ambitious project he’d ever taken on.

Boyhood tells the story of a boy named Mason (Ellar Coltrane) as he grows from a six-year-old to a college freshman, and rather than relying on makeup, casting, or CG trickery, Linklater actually shot the film over 12 years. Starting in 2002, he assembled his cast — Ethan Hawke and Patricia Arquette star as the boy’s parents, while Linklater’s daughter Lorelei plays Mason’s sister — to shoot one section of the film. Each subsequent year they shot another sequence, continuing on until production finally wrapped last October: the same actors playing the same roles, aging in sync with their characters. Sequels and documentaries have caught up with people long after audiences have first met them, but a narrative film has never really attempted this sort of real-time examination of someone’s life before. Funny and evocative, the finished product is a truly unique look at the evolution of a family, and to hear the director and cast talk about the process, getting to the finish line wasn’t easy. 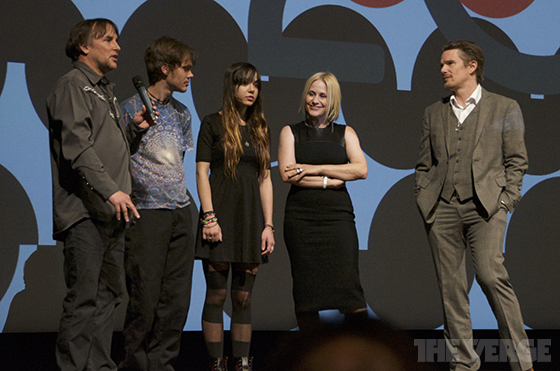 Richard Linklater and the cast of Boyhood

"I wanted to do something about childhood," Linklater told the audience in a post-screening panel, but he found he didn’t have enough to say about any one single phase of growing up. "And so I just got this eureka moment of, ‘Well, why couldn’t you just film a little bit, and encompass all of it?’" His frequent collaborator Hawke was the first actor on board, but logistical concerns and financing were another matter. Linklater pitched the concept to some producers he was working with, who had the same reaction most people would: shooting a movie about children over such a long period of time wasn’t feasible or realistic.

"I knew the last shot of the movie by year two."

The project eventually found support at IFC Films, and moved forward with a broad blueprint of the story Linklater wanted to tell. "The architecture was kinda there," he said, but the script itself was a collaborative process, with the actors and director workshopping various scenes before cameras ever rolled. It was a similar process to what Linklater used in the Before Sunrise series, giving him the flexibility to incorporate any ideas that the actors brought to the table. "I knew the last shot of the movie by year two," he said, "but the details of it were in flux and pretty open to whatever came up."

The yearly shoots typically ran between three to four days, after which Linklater and editor Sandra Adair would go to work. "Every year we’d spend a few weeks editing that episode, and then as we went on we would attach it to the episode from before," he said. It gave him the rare chance to reconsider creative decisions years after the fact. "In the end, it’s pretty unique to have ten years to think about a shot," he said, noting that transitions had been a particular area of focus. While the original plan had been for overt shifts as the film leapt from one year to the next, they ended up on the cutting room floor, resulting in one seamless ride throughout Mason’s life. 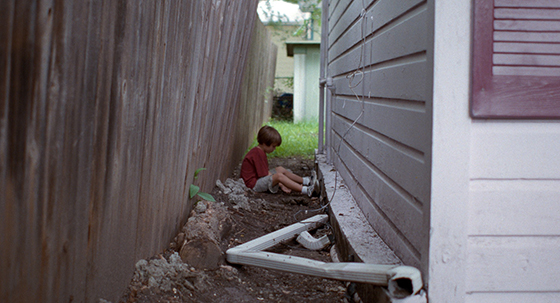 Shooting over such a long timespan also brought technological considerations to the forefront, as Linklater found himself racing against the demise of film as a shooting format. "We started this in ‘02, and I was like, ‘You know, we’re going to shoot 35mm negative. And I think it’ll still be around 12 years for now,’" he said. While they were able to finish shooting on film last year, they faced aging equipment and processing labs that had declined in quality due to the lack of business. "It felt like it was sort of the end of that era."

"An epic about minutiae."

Hawke calls the film "an epic about minutiae," and that’s not far off. Its characters don’t face life-altering decisions at every turn, and it has almost none of the overwrought angst that’s so often present in movies about adolescents. Instead, Boyhood is a story about the importance of fleeting moments, and the constantly evolving way in which we see ourselves and the world around us. When we first meet Mason and his sister, she incessantly teases him by singing Britney Spears songs — though she outgrows that faster than you might think. Mason’s dad is a fierce supporter of Barack Obama’s 2008 presidential campaign, but over the years that political fire gives way to his new wife’s more conservative sensibilities. The movie makes its points not by underlining them with obvious payoffs or reveals, but by simply presenting the characters as they move through these phases over the course of many years.

Of course, given Linklater’s fondness for reteaming with old collaborators, an audience member asked if he’d start another 12-year run now that Boyhood was finally going to hit theaters. Linklater claimed the team had never even discussed the idea. "We’ll pick him up as a young parent," he laughed. "Next year.”