Windows 8.1 Update 1 shows signs of a Metro and desktop merge

Windows 8.1 Update 1 shows signs of a Metro and desktop merge

Initial screenshots of the upcoming Windows 8.1 Update 1 didn’t show many signs of changes, but new images distributed today hint at some signs of improved interaction between the "Metro" and desktop environments. Russian leaker WZor has published several screenshots that show pinned Metro apps in the taskbar section of the desktop in Windows 8.1 Update 1. There's also a new option to "Show Store apps on the taskbar." While it’s not a hugely significant change, it appears to be the first change that Microsoft has implemented on its path towards Windows 9.

Microsoft is expected to release Windows 9 in April 2015 with "Metro 2.0" improvements that allow users to run Windows 8-style ("Metro") apps in separate windows on the desktop. While today’s screenshots don’t reveal whether any additional changes may come as part of Windows 8.1 Update 1, a move to allow users to run Metro apps on the desktop would likely help improve the functionality of the operating system. Microsoft has faced criticisms over its separate desktop and Metro environments, and the jarring switches between the two. Some designers have built concepts for future versions of Windows, but remedying the separate environments appears to be a primary focus for Windows 9. Microsoft is expected to release and detail Windows 8.1 Update 1 at its upcoming Build developer conference in April. 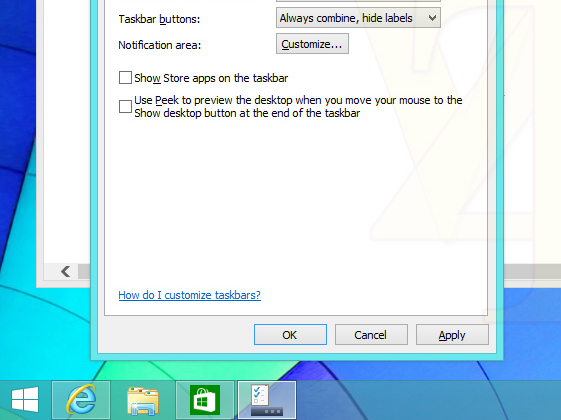