Iconic Bell Labs campus will be revived as an urban hub

Share All sharing options for: Iconic Bell Labs campus will be revived as an urban hub

Some 50 years ago, Bell Labs was bustling and full of life. The Eero Saarinen-designed facility was a hub for scientists who helped contribute to innovations like touch-tone dialing, the microwave, and the cellphone. Its complicated yet functional layout allowed workers to collaborate by running into each other in its sprawling hallways, sharing the occasional cigarette on its ashtray-equipped balconies.

But that was over a half-century ago — since 2007, Bell Labs in Holmdel, New Jersey, has been empty. It was shut down when its owner, French telecommunications company Alcatel-Lucent, consolidated research facilities, leaving all of its 1.9 million square feet vacant and waiting for either destruction or revival. Not only is the complex a Saarinen masterpiece, but after its closing Alcatel-Lucent cared for Bell Labs as if it were still inhabited, maintaining the 470-acre grounds, sweeping the floors, and trimming the interior plants. The odds of finding another single tenant for the massive space is unlikely, and there were talks of razing the structure, but those were quickly silenced as the idea outraged scientists and architects around the world. 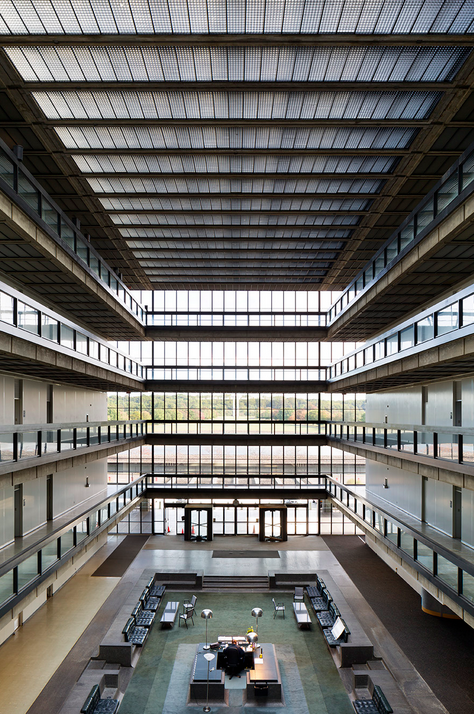 Can Bell Labs be reimagined while maintaining its architectural roots?

Now under the new ownership of Somerset Development, the real challenge begins: readapting Bell Lab's complicated layout for modern use. Using a $100 million redevelopment plan, Somerset wants to turn the complex into an urban center for Holmdel, housing retail and healthcare spaces, offices, and coffee shops. It's currently working with New York architect Alexander Gorlin to come up with ways of bringing the complex back to life without compromising Saarinen's original design.

Not only will Gorlin have to figure out logistics of lighting, acoustics, and how to make the exterior's clad in single-pane glass with inoperable windows work in a modern setting, but he and Somerset will have to make the space inviting and desirable for the people of Holmdel. Most other retail space is about a 10-minute drive away, so Somerset is hoping that Bell Labs can fill a void by becoming a new city center, complemented by 225 new houses that will be build along the outer edge of the property. A massive structure like this was bound to be a massive challenge to anyone brave enough to tackle it, but when finished, the new Bell Labs could be an updated urban center that's enriched by Saarinen's architectural vision.