There was a time when every portable speaker was a status symbol. As commercial AM receivers grew popular in the early 1920s, many were opulent tabletop units brimming with vacuum tubes and brass dials — the kind of stuff that makes steampunks salivate. Almost a century later we live in a world overflowing with cheap, underpowered Bluetooth units as small as golf balls that you can buy as an afterthought near the checkout line at Walgreens. At the pinnacle of the small-speaker spectrum is Tivoli Audio’s PAL radio, a subdued chunk of gear that’s the ranch dressing of portable audio: everything you put on it sounds amazing.

Originally released in 2002, the Portable Audio Laboratory was the last device designed by legendary acoustic engineer Henry Kloss. He took the guts from his low-slung Model One tabletop unit and rearranged them vertically, swapping a stately wooden case for road-ready plastic. The four elements of radio enjoyment are represented by as many openings in the front of the case: while the AM / FM / OFF switch and volume knob are nothing fancy, the 2 1/4-inch monaural speaker and tuning knob are riddled with subtle thrills.

In 2013 most people change stations with presets or crude seek buttons. There are no buttons at all on a PAL: you use two fingers to turn a highly resistive knob that produces a silky motion of smooth stops and intentional finishes. The tuner is geared at a relatively high 5:1 ratio, which means there’s more "breathing room" between stations. It’s the antithesis of clicky auto-seek, a motion that encourages the slow exploration of the entire FM and AM bands, even the ones from lower-wattage broadcasters that are typically overpowered by Clear Channel megawatt blasters. While I don’t usually have a taste for luxury, every time I change the channel on my PAL it casts an ugly light on the experience of using the in-dash tuner of my Honda — kind of like eating microwaved pizza after knowing the textural perfection of a wood-fired original.

And then there’s the way it sounds. For starters, music and talk just sound better when they’re coming from a well-calibrated radio transmitter. Although I listen to my iPod frequently on the PAL via its 1/8-inch audio in, the speaker is at its purest when you’re pulling audio from the air. Most radios offer dismal AM reception and reproduction, but Kloss came of age before FM was widely used and made sure its elder broadcast brother would sound good on his final creation. If you’ve never given amplitude modulation a chance because of poor sound quality, you should hear it on a PAL: atmospheric whine is minimized and the longer wavelengths native to AM lend an intensely warm flavor to the primary driver of the "other" dial, the bare human voice. 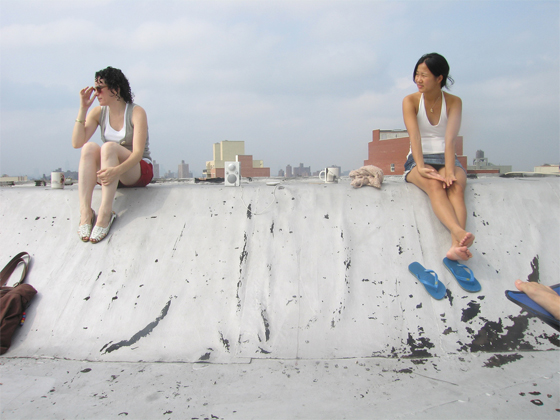 PAL with one of the many generations of iPods it’s outlived.

Operating on battery power means that no errant AC outlet noise enters the signal chain, something that’s best appreciated in sparse compositions played at high volume. Although I’ve heard Lorde’s "Royals" in a million different listening scenarios, I always turn it all the way up when I hear it on my PAL’s FM tuner. The chart-topper’s airy finger snaps are rendered as pristinely as the massive kick drum, and in the negative space that defines its composition there’s nothing but a sticky-sweet broadcast static to remind you that you’re not in the studio with the girl herself.

Speaking of turning it all the way up, there’s no problem with doing just that in almost any sonic context you can throw at the PAL. This is the Achilles’ heel of most modern portables: they can get really loud, but they’ll also sound like garbage when they’re doing it. The baked-in volume limiting of the Tivoli speaker means that the cone almost never gets overloaded, even from the most bangingest of bass lines. While you’d never use it for anything more raucous than a two-person dance party, you never have to worry about twisting the right-hand knob all the way to the top of its range. Because there are no energy-hogging modern wireless protocols on board, it’s also the only rechargeable device I own that I never really worry about plugging in: at low volume, the PAL can last for more than 12 hours on a single charge. This means that I can wake up to the same station I put on at bedtime for two nights in a row.

In a long-term relationship

Unlike the glass-faced Swiss army knives of communication that are so important in today’s tech ecosystem, the $220 Portable Audio Laboratory requires no external cover or delicate handling — it’s an almost Emersonian testament to rugged self reliance. I have had the same unit for 10 goddamn years — it’s been dropped in the sand, left in the sun for weeks, and shoved into the bottom of bags. I’ve showered with it, strapped it to my bike for 100-mile rides, and listened to Depeche Mode on it as I used its 2-pound heft to hammer tent stakes in desperate camping situations. And still, it sounds as stunning as the first day I switched it on.

It’s been dropped in the sand, left in the sun for weeks, and shoved into the bottom of bags

The PAL has also brought me some of the most transcendent aural moments of my life, alone, outside, with nothing but the stars to accompany a killer Fleetwood Mac session on the FM classic rock station, or a UFO-chasing tale with the late king of after-hours AM weirdness, Art Bell. Henry Kloss left us with the best tool we have to appreciate not just the stuff coming out of the speaker, but the depth and breadth of radio itself.